This morning, Young Dave chaired his last cabinet meeting. There were the customary tributes, the courteous farewells. Tomorrow he will take Prime Minister’s Questions for the last time. The removal firms have already fetched up in Downing Street, and perhaps not just for the occupant of Number 10. Some time tomorrow, Theresa May will arrive and her Premiership will begin. But one thing will be missing. 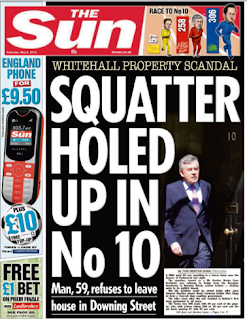 What might that be? Well, Cameron arrived in Downing Street after not just a General Election, but also a lengthy negotiation between the Tories and Lib Dems to agree a Coalition deal. The two parties together enjoyed a Commons majority of over 70. Ms May has not submitted herself to the test of the ballot box. Moreover, she has previous form for wanting an arriving Prime Minister to do so.

When Pa Broon succeeded the sainted Tone in 2007, as the Independent has reminded us, “the then shadow minister for women, said Mr Brown was ‘incompetent, lacking in vision, with the same old spin’ and ‘running scared of the people’s verdict’”. Moreover, she was not shy of quoting online petitions in support of her position.

So, with the Labour Party experiencing its own problems right now, what’s to stop her from calling a snap General Election? Yes, there is the Fixed Term Parliaments Act, but there are usually ways and means for those politicians keen to make their mark. Or would Ms May rather wait, in the style of John Major, until a few by-elections take away that slim overall majority and make her dependent on fringe parties to pass legislation?

... and those were her words

Would she rather carry on as Jim Callaghan, another who took over the top job without submitting himself to the electorate, did, staggering from one crisis to another before being brought down by a vote of no confidence? Labour might look unable to force such an event right now, but a new leader who was good at working across party lines, with the SNP, Greens, Lib Dems and others could change all that.

The Tories might not think such a scenario credible. But had they been presented with an account of what has happened in the last few weeks, just after their triumphant return to majority Government last year, they would have laughed it out of court. Theresa May should remember her parting shot at Gordon Brown in 2007: “He has no democratic mandate. He has a reputation tainted by his failures after a decade in office. And he has no new ideas. An early election? Bring it on”.

There is also the Scottish independence question which has greater relevance now than there was during the Blair/Brown handover. I suspect Mrs May would like a bit more time to consider her options on that question, and other devolution matters, particularly as the Scots wished to remain.

Anyone who thinks May is going to be different in aims to Cameron and all the other neocons (that includes New Labour and the LibDems) is a dope.

Here's a suggestion: Compare May's lying bullshit of a "unification" speech yesterday to the same load of hypocritical codswallop delivered by mentally disturbed Thatcher in 1979. Then list all the policies which have divided the so-called United Kingdom since 1979 - but try not to stay up beyond midnight.

The truth is it's largely irrelevant who becomes tory leader. When it comes to the crunch they'd rob their own mothers for more profit.

Meanwhile, where war-mongering, tuition fees-charging, welfare-cutting, spivette Angela Eagle is concerned......will those to whom PR claptrap matters please tell me why anybody should vote for a woman who looks and sounds like Sammy Lee with lipstick?

"Yes, there is the Fixed Term Parliaments Act, but there are usually ways and means for those politicians keen to make their mark."

One feature of Britain (which led our allies to dub us "Perfidious Albion") is a total lack of intent to play by the rules of the game.

the Fixed Term Parliaments Act states that a snap election requires a two-thirds majority in a House of Commons vote. But there are ways and means...

Article 50.1 of the EU treaty is clear. "1. Any Member State may decide to withdraw from the Union in accordance with its own constitutional requirements." For the UK, this surely means - we are supposed to have Parliamentary supremacy - a vote of the House of Commons (and possibly of the Lords as well to empower the Queen in Council) communicated by the Speaker. No - apparently a drunken text from the PM under the royal prerogative will do.

we have a triple lock - apparently - that states that any amendment to the EU treaty must be confirmed beforehand by a referendum. We wish to change - at the very least - Article 52, which lists the names of the Member States of the EU. Even if (Article 48) the other 27 agree, we should get a referendum for this. Will we?

To me, the NEC rules say that if there is already a Leader for the Labour party, then challengers need nominations from 20% of the Parliamentary and European Parliamentary Labour parties (some 50 people - Danczuk doesn't count) but it says nothing about the leader. Does the NEC meet today to change the rules to exclude Corbyn.

It all reminds me of that song they sing at the end of the Last Night of the Proms: "Waive, Britannia. Britannia waives the rules."

One interesting lack of a rule: the EU treaty states nothing that could prevent a member who has given notice under Article 50 from withdrawing the notice before the two years or whatever is up.