It used to be a popular sport at Private Eye magazine to invent ludicrous spoof headlines in the run-up to General Elections for papers like the Mail and Sun. When AIDS first came to public notice, the Eye ran a Mail send-up that told of “AIDS SHOCK FOR LABOUR VOTERS”. After all, no newspaper would actually run something like that, would they? And the upmarket titles would avoid such things like, er, the plague.

Well, not any more: the increasingly downmarket and desperate Telegraph leave no stone unturned in its barrel-scraping pursuit of More And More Clicks For Itself Personally Now. This culminated yesterday in an article which attempted to suggest that voting Remain in the EU referendum left voters at greater risk of contracting Sexually Transmitted Infections (STIs). This was later deleted, but … the evidence has now arrived on Zelo Street.

You think I jest? There is the Google search entry from less than an hour ago: “Remain supporters probably more at risk from STIs - The Telegraph”. So exactly how does voting Remain mean someone is more likely to contract an STI? Is that like saying [sotto voce] that a certain manual activity makes you deaf? Well, come on, speak up!

Here is the excuse for the article, screen grabbed before someone at the Telegraph realised this was not a very good idea and quietly pulled the piece: “Those who voted Remain in the referendum are probably more at risk from STIs than Brexiteers, according to new data that shows how young people in big cities had the highest rates of new infections in 2015”. Where do we start with that one?

Quite apart from the obvious one - you aren’t going to pick up an STI without some form of sexual contact, so without that data the story is, er, a stiff - the statistics don’t, er, stand it up. Most younger voters voted Remain, but most younger voters didn’t vote. Most of those who voted Remain were not young people in big cities. 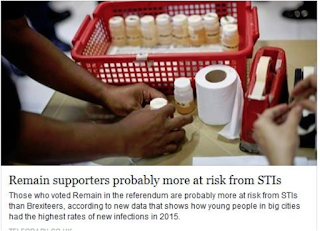 Someone at the Telegraph got a little carried away with themselves on that one, and that there was a hack there prepared to write that guff and believe it to be credible tells you all you need to know about the desperate state of the paper right now. That kind of line of thought would not have got through the door at the Tel even a decade ago. Now the Barclay Brothers have run it so far into the ground that anyone can get access to the systems that cobble together copy to become part of the clickbait factory.

But little wonder that the Telegraph got cold feet and gave that item the, er, hump. It’s not even worth one, er, clap. It’s, er, been pulled out. It’s upset the Tel’s natural rhythm, put a cap on its credibility and proved utterly anti-climactic. Or to put it another way, it was a load of clickbait crap that has wisely been deleted and binned.

The Telegraph was a paper of record once. That now seems a long time ago.
Posted by Tim Fenton at 15:44

I've got an old Private Eye from the mid 80's with the fake Mail headline "Aids threat to Labour voters"......

Der Telegraaf has never been anything more than a bullshit far right pamphlet, just as the Church of England is the tory party at prayer.

"Paper of record" my arse. I wouldn't hang it on a nail for any use whatever, let alone on my arse.

I assume the tissue paper in the pic is for Leavers who prefer, er, more single handed pursuits that avoid the risk of catching something nasty

Then there is this jem by way of denigrating Corbyn (dastardly man he is going to an allotment meeting, how very dare he!) http://www.telegraph.co.uk/news/2016/07/07/jeremy-corbyn-attended-meeting-of-his-local-allotment-associatio/

To be honest, I think they have lost the plot... its nearly as good as this one calling him out for not tying his roses back (really, this is the best they can come up with!) http://www.telegraph.co.uk/news/2016/06/29/jeremy-corbyns-overgrown-garden-reflects-the-man-himself-alan-ti/

Its a good job they don't allow comments any more, or else they would be ripping the torygraph a new one for such facile "reporting"... actually, does anyone still work there or is it all nothing more than a giant webcrawling and re-publishing scam now with one or two hacks that write opinion bits on the orders of the advertising execs?

I've got that old Private Eye from the mid 80's with the fake Mail headline "Aids threat to Labour voters"......when I see my parents mail (for the financial section, honestly) I always mentally reference it but I don't know what to think anymore after the last 2 weeks..