As if the leadership campaign of Tory MP Andrea Leadsom was not in enough trouble already, after what appeared to be her programme for Government was snapped by an eagle-eyed commuter on an evening Central Line train earlier this week, the woman who has also been caught embellishing her CV then gave an interview to Rachel Sylvester of the Murdoch Times and put the ball firmly in her own net. 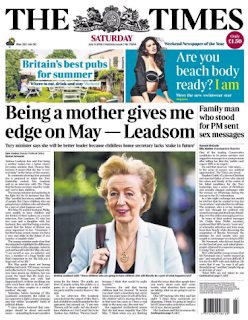 As soon as the front page of Saturday’s Times was revealed last night, with its main headline “Being a mother gives me edge on May - Leadsom”, together with the equally damning sub-heading “Tory minister says she will be better leader because childless Home Secretary lacks ‘stake in future’”, it was clear that the interview was one campaign that had turned out not necessarily to Ms Leadsom’s advantage.

Worse, it came hard on the heels of Theresa May calling for a clean campaign, and worse still, that followed an interview with Ms May and husband Philip in which they had expressed sadness at their inability to have children. So what was Ms Leadsom’s reaction to the headline? Did she express some kind of regret, and make plain that she had not intended to make an issue of Ms May’s childlessness? 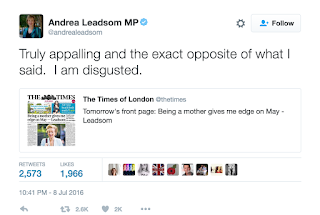 Far from it: she was on to Twitter with guns blazing, ranting “Truly appalling and the exact opposite of what I said.  I am disgusted”. So what did she say to Ms Sylvester? Fortunately, the Times has released the unedited transcript, and it does not make good reading for the Leadsom camp. This is the relevant exchange.

Sylvester: During the euro debates, you said several times ‘as a mum’ . Do you feel like a mum in politics?

Sylvester: Why and how?

Leadsom: So, really carefully, because I am sure, I don’t really know Theresa very well but I am sure she will be really sad she doesn’t have children so I don’t want this to be ‘Andrea has children, Theresa hasn’t’, because I think that would be really horrible but, genuinely, I feel being a mum means you have a very real stake in the future of our country, a tangible stake. She possibly has nieces, nephews, lots of people. But I have children who are going to have children who will directly be a part of what happens next.

It was Andrea Leadsom who introduced the comparison between her having children and Threresa May having none. She did not have to mention Ms May, and indeed, Ms Sylvester did not suggest or lead in that direction.

Could it get even worse? Sadly, it could: Ian Birrell observed “'I'm not a feminist because I'm not anti-men' - another quote by the woeful Andrea Leadsom in her Times interview”. If Ms Leadsom is so accident-prone that she manages that in just one interview, what would the 10 Downing Street decision making process be like with her at it full time?

Of course, Tory Party members might lap it up. In which case, Heaven help us all.
Posted by Tim Fenton at 10:31

Rather than the Sarah Plain of Uk politics I believe she is more like the George Bush jnr. It doesn't really matter what she says doesn't make a lot of sense because she is only a front for those behind who, if she ever gets near no 10, will be "coaching" her interviews and making all the policy decisions.

As Tim has pointed out when you look behind the Emperess with no clothes it's those scary advisers who are making the running.

tory party members WILL lap it up.