This evening, the latest series of BBC2 motoring show Top Gear comes to an end, with the programme not having been pulled, despite the best efforts of the Murdoch doggies at the Sun, who are continuing their almighty mardy strop following the BBC’s decision to dismiss former lead host Jeremy Clarkson in the wake of his racially abusing and then physically assaulting producer Oisin Tymon, replacing him with Chris Evans. 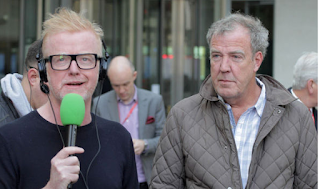 But the Sun has not so much as paused its campaign to damage Evans, running a series of hatchet jobs on the presenter which has culminated in today’s claim “Top Gear host Chris Evans faces police probe over ‘sexual assault’”. Readers are also told, for good measure, that “Beeb face dilemma over whether to take Evans off Radio 2 breakfast show with motor show future already under scrutiny”.

Note that the phrase “sexual assault” is in quotes, because it is a claim the paper cannot stand up. And the idea that Evans might be taken off the Radio 2 breakfast show is pure speculation. All that has happened is that someone has made an allegation of misconduct which the Police are duty-bound to investigate. All that the “Police probe” is certain to do is to result in his being interviewed. That may be the end of it.

So how does the Sun come to report this as if it were news? Ah well. This is not the first time that a Top Gear story has started life elsewhere in the Murdoch empire. Zelo Street regulars will recall that a previous smear of Evans in May originated at the website Heat Street, a Murdoch-bankrolled operation fronted by (thankfully) former Tory MP Louise Mensch. The story had therefore been “reported elsewhere”.

This enabled the Sun to pretend that there really was a genuine story to follow up, in the way that the news and comment parts feed off one another at Fox News Channel (fair and balanced my arse). The only problem is that Heat Street is little more than a projection of Ms Mensch’s prejudices, and as such its credibility is not unadjacent to zero.

Indeed, all that Heat Street manages to tell readers is “The suggestion of police involvement” as a result of what Evans is alleged to have done in the past, which appears to consist of exposing himself to work colleagues. Unless some kind of disciplinary action was taken at the time by his then employers - which appears not to have been the BBC - there is little chance of his attracting even a Police caution for that.

The BBC’s Director General Lord Hall-Hall has also told Tory MP Andrew Bridgen, one of the professional complaints brigade on the party’s right wing, “there is no truth to the suggestion that Chris Evans’ behaviour either on the set of Top Gear or on the breakfast show at Radio 2 has been unprofessional … I am very satisfied that since he rejoined the BBC he has met the standards expected of him”.

All of which means that most of the Heat Street and Sun stories are going nowhere. They have bet the house on a historical complaint of assault getting off the ground, such is their desperation to derail Top Gear and thereby damage the BBC. No change there, then.
Posted by Tim Fenton at 17:03

Someone tell that Cunt Murdoch that sexual abuse (as bad as it may be) extends (and includes) his own behaviours, such as, marrying young ladies for own personal gain. Now, this can be anything from sex to birthing children with dual passports/citizenship that could come in handy for hiding.

Ain't it funny when those who cast stones are seen to be much worse than those they shout about?

Well, if we're going to start on this disgusting road.......

What about a fat, elderly, balding but with dyed hair, Murdoch pensioner in a dirty vest mauling an attractive young woman......Would Zelo Street perchance have a photo of this unnerving sight?

Well he did admit in a radio show in 2005 that he went into meetings naked and aroused.he claimed it was funny.
The BBC did not act when people complained about his actions, they just replaced those that complained.
Let blanc has said on a radio show last week that he won't do another series if Evans gets kept on.
So its going to be interesting what happens