After Chris Evans quit BBC Top Gear following the end of the last series of the show, some media watchers might have thought that the Murdoch doggies at the Sun, who had run a series of obsessive knocking pieces dredging up anything they could find from Evans’ past - as well as making up the rest - would have left him alone. But that thought would have been misplaced, as back they have come today. 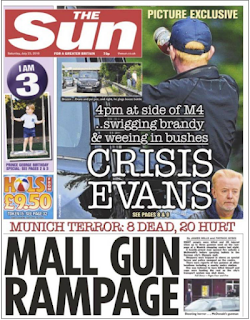 As if editor Tony Gallagher - one has to assume that he, or someone in the Baby Shard bunker, is actually in control of the rag and able to call the shots on what is allowed onto its pages - has not got enough on his plate with the Channel 4 Islamophobia row right now, today’s front page relegated its headline covering the Munich shootings to a glorified footnote so that readers could have another Evans attack served up.

This one is particularly creepy, suggesting that the Sun is having the presenter tailed by a snapper: “Picture Exclusive … 4pm at side of M4 swigging brandy & weeing in bushes … CRISIS EVANS”. The copy is all one would expect, or maybe dread: “TOP Gear flop Chris Evans fuels fears he’s on the brink of a meltdown as he swigs booze and urinates at the side of a busy motorway … The presenter was spotted in full view of drivers on the M4 near Heathrow as he knocked back posh Remy Martin cognac straight from the bottle”.

What’s “posh” about Remy Martin? Seriously? Gallagher and his overpaid pals don’t do much fraternising with the lower orders, do they? You can buy the stuff down the pub. You can buy a bottle of it at Asda. It can’t be sodding posh. But enough of showing what a bunch of amateur human beings work on the Sun - what’s Evans actually done wrong?

He wasn’t driving the vehicle that stopped on the hard shoulder of the M4, and the only offence he could be done for is one of public decency - and then only if the Sun’s snapper is prepared to go to court and explain what they were doing putting a tail on Evans on the off-chance that he might provide them with some free copy.

It’s not going to happen, is it, Murdoch poodles? But we do get “an onlooker”, which means it could be the snapper, or just someone who happened to be in the newsroom when the story was being dreamed up, telling “He looked like he was in very high spirits … His mate went for a wee first and Chris was joking around on the hard shoulder next to the car … He was bending over and looked as though he was ogling his mate’s willy for a laugh … Then Chris joined him and it looked like they were comparing sizes or something”. Meaning the snapper was too far away to hear what was being said.

Moderately well-known bloke and his pal get their driver to pull over and let then take a pee break in heavy afternoon traffic No Shock Horror. It’s not news, there is no public interest defence in publishing, it’s creepy and obsessive, and were Evans to object, the Sun would have to lean very hard on IPSO not to get their knuckles rapped (again).

If Chris Evans has a serious problem, the Sun and its hacks have a yet worse one.
Posted by Tim Fenton at 16:41

Hi there Tim, I understand the difference between the public interest and the public is interested but swigging from a bottle of spirits and urinating at the side of the road are, as we say in Paisley, jake AF!

Could the insinuation be that, while receiving payment from monies extracted by menaces from licence payers, he was impaired by alcohol to the extent that he was unable to fulfil his duties? No one sees you vomiting on the radio!

"This one is particularly creepy, suggesting that the Sun is having the presenter tailed by a snapper" -- oh, do come along now. We live in an age in which (as a lot of the Munich coverage has demonstrated yet again) the citizen 'armed' with a smartphone is the public's unofficial CCTV. Which is more likely: (a) that a Sun reporter trailed Chris Evans for hours, even sweating it out in an hours-long traffic snarl-up; or (b) that Mr Evans (who has a fairly well-known face and distinctive appearance) attracted the attention of some bored fellow-motorist stuck behind him, who sensed the opportunity to make a quick buck from flogging some embarrassing pics?

Good point well made, I agree that we now experience things vicariously, through the ubiquitous camera phone, especially with the vast MPs many phone cameras shoot in. Press photography may soon be usurped by citizens with hi-res phone cameras, the ability to transmit these images instantly and the ability to be 'omnipresent'!

Look at the photos. These are not snapshots taken on a phone from a passing car. Whoever it is has pulled onto the hard shoulder ahead of Evans. The main image of him swigging from the bottle is of high resolution print quality, yet to take that photo at that quality with a phone you would have to be standing next to him. It's taken with a professional zoom lens. Now, could an ordinary member of the public happen to be in traffic behind Chris Evans, with a camera and zoom lens ready, and decide to pull onto the hard shoulder to take a snap when they just happened to see him? Sure. But it's unlikely. This is The Sun we're talking about.

Wouldn't be surprised if they also hack Chris's mobile. (I'm sure they still do them, if circumspectly :)

Look at the photos. These are not snapshots taken on a phone from a passing car. Whoever it is has pulled onto the hard shoulder ahead of Evans. I have looked at the photos. They are not brilliant quality at all (very slightly fuzzy rather than pinpoint-sharp) and entirely compatible with a good-quality cameraphone.

Moreover, no-one suggested the pics were taken from a passing car. The story clearly specifies that they were taken during a traffic snarl-up in which drivers were delayed by hours due to gridlock (hence Mr Evan's need to get out for an unscheduled piddle). So another motorist is the most obvious source.

Finally, when you 'look at the photos' properly, you will see that they are credited to 'xposure' (bottom left corner of each pic). Xposure is a celebrity photo-agency. In case it needs pointing out, this means that the photos did not originate from a Sun photographer. And when you check xposurephotos.com you will see that they offer unspecified but large amounts of money to members of the public with saleable celebrity snapshots.

Everything about these photos points to them being taken by a money-grabbing motorist with a cameraphone, stuck in the traffic-jam near Mr Evans, then flogged to the press via the xposure agency -- who knew that the Sun, with its Top Gear/Clarkson/Evans obsession would snap them up (no pun intended).