The Mirror titles are the only mainstream papers to unswervingly support the Labour Party. But recently the wobbles have set in, as doubts have surfaced over Jeremy Corbyn’s ability to lead The Red Team to a General Election victory, in a contest which could come all too soon. One opinion poll this weekend gave the Tories a ten point lead, which would be enough to see Theresa May back in Downing Street with an increased majority. 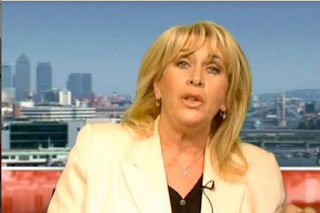 So today, to no surprise at all, push has come to shove and panic has set in, this being manifested in a magnificent rant by Carole Marole, the intensity of which should satisfy the most discerning rant connoisseur. “Jeremy Corbyn's supporters are like Lenin style bully boys who'd send women to the gulag” froths the headline, and this is where she starts to go badly wrong: Lenin and the Gulag are not contemporaneous.

Vladimir Ilyich Ulyanov, aka Lenin, died in 1924. The official formation of the Glavnoye upravleniye lagerey (“Main camp organisation”), or Gulag, did not come until 1930. Still, Lenin, Stalin, what’s in a name, provided readers get the drift, eh? It’s the Corbyn lot who done it, although Ms Malone finds it difficult to pony up any evidence.

We read “Angela Eagle has been threatened with death … she has been abused and intimidated in the most hideous ways by thugs acting in Corbyn’s name. She has been called a ‘treacherous lesbian’ and branded ‘as charismatic as herpes’. She’s had a brick thrown through her Liverpool constituency office window”. We don’t know who chucked it, and nor do we have a link between the abuse and Jeremy Corbyn.

This does not trouble Ms Malone, who then goes totally OTT by telling “And then there’s Luciana Berger, who also resigned from Corbyn’s shadow cabinet. She was allegedly told she was going to get it just like Jo Cox did’ and was sent a photo of a kitchen knife and warned: ‘Watch your back, Jewish scum’”. Ms Berger has read the Mirror article. But she has also passed severely adverse comment upon it.

She Tweeted to the pundit “I've read your column. For the record, the man who sent me those message has nothing to do with @uklabour”. Indeed he was not, and had Carole Malone read the excellent Liverpool Echo, she would know that John Nimmo, who has now been remanded in custody, was nothing to do with any part of the Labour Party, and certainly not the current leadership. He’s just a sad anti-Semite.

That is not allowed to trouble Ms Malone, who concludes “And THIS is what the once great Labour Party has become - a hate-filled, violent, lunatic fringe where members who disagree with the hardliners are abused, threatened and intimidated into silence”. There are strong opinions held across the Labour Party, but that is no reason to make things up on the fly just because pundits have column inches to fill.

Of all newspaper titles, one should be able to expect the Mirror to report goings-on in the Labour Party accurately. It’s sad that Carole Malone is unable, or unwilling, to do so.

[UPDATE 1200 hours: as I've been reminded by commenters, and should have noticed, another of Ms Malone's elementary howlers was to talk of Angela Eagle's "Liverpool constituency". Wallasey is of course across the river on the Wirral, and so she should have said "Merseyside".

Ms Malone would not have conflated Newcastle-upon-Tyne and Gateshead, would she? Another day, another piece of abysmal research]
Posted by Tim Fenton at 10:49

It would appear that there was no breaking of any window in Angela Eagle's constituency office. There was a broken window on a stairwell, in a shared block of offices, which cannot be pinned down to anyone doing it in the name of Corbyn.

And sadly, the Malone article has been retweeted by at least 2 Labour MP's - Piero and Smyth and by lots of other Labour right-wing people eg focus group and polling "expert" Deborah Mattison

You missed the obvious in this, Tim: "...She’s had a brick thrown through her Liverpool constituency office window.”

Wallasey is not in Liverpool. It's on the other side of the river, on the Wirral.

But never mind, ey. You can demonise everything if you add the word "Liverpool" and the hints of "Militant Tendency." That, of course, is because that city was the last to stand up to the tories in any organised fashion - hence the political, propaganda and economic attacks against it.

Malone? A useless gobbo who should join the tories. She'd fit right in. The Malones of this world are ten a penny.

As for the Mirror......Don't kid yourself it's any better than the rest of the rags when it comes to the crunch. Check out its propaganda during the Miners Strike, led, of course, by the sunken Maxwell. When it comes to real resistance to the establishment it always runs off with its tail between its legs to join the other neocon boot boys.

Overall, there is black humour in this anti-Corbyn barrage. Just before I went out last night I flipped quickly through the TV news channels to make sure I was up to date with the daily tirade of lies. Imagine my delight when I came across an interview of McTernan on RT - he had a face like a smacked arse as it sinks in this time is different, that he and his repulsive type are in grave danger of being shown the door, that maybe, just maybe, their traitorous game is up. I almost laughed me socks down.

I want Corbyn to survive these lunatics even if it's only for a short time. It would mean there are still enough people to draw a line in the sand. It might even mean a decisive resurgence in true democracy, that there is a recovery of political courage. With some luck the traitors will shove off and go down the same drain as the defunct SDP, instead of leeching off a movement they have betrayed for personal gain.

If he gets re-elected you can expect the rabid-foamed attacks on him to redouble and the dishonesty of someone like Like Kinnock(!) or Benn to front it, all of it accompanied by false gravitas, lies and yet more betrayal, all of it supported by mainstream media. All of the guilty parties deserve nothing but utter contempt.

Mildly interesting, too, to note the TV news editing techniques deployed during the "window-smashing" saga.

Much of it was interspersed with shots of Liverpool's famous waterfront - which of course had sod all to do with what happened in Wallasey. But you get the "link": Smashed window - Liverpool - probably "they" were involved. ("They" of being Militant Tendency, long ago exposed as a government agent provocateur organisation. Bleasdale even took a short lived shot at that in his execrable GBH TV propaganda film).

The point about this is that the guilty TV editors and "journalists" simply haven't yet twigged that in this social media age people are well up to speed on how the old lies are perpetrated. Video editing techniques and forgery are as old hat as the lying words in the press medium. Monopoly ownership and propaganda no longer has its old cache. Their days are numbered.

This is not to say there won't be new "techniques of lying" - there will of course - but we have moved on. Currently, censorship concentrates on limiting or omitting completely anything not complying with the status quo - for example, scarcely any mention of the earlier death threats received by Jeremy Corbyn. Quite soon a desperate establishment will be left with only one option. Guess what it is.

Meanwhile, it would be a good idea to collect all the allegations of "bullying and intimidation" and align it with available evidence that any of it has anything whatever to do with Jeremy Corbyn and his supporters. I'm not a betting man but I'm willing to wager the "connection" will be less than the diameter of a human hair.

That would also be the "constituency office" window... that was in reality a window on to the shared stairwell to 6 occupants of the building, including her office. Even though her office was on the ground floor with a huge Labour sticker in the window which surely would have been a better target if it was directed at her office?

The incident where one of the NEC members was saying that Corbyns lot had put her email address and phone number on the internet, that actually she had put on the internet in her blog... and then spent the next five hours in tears as she traipsed around to multiple interviews telling each one how she had been bullied in the NEC meeting because Corbyn had suggested that should he not be on the ballot he would seek judicial review and how she and other members had received bullying texts while in the NEC meeting, which Owen Jones then had to publish because of the insinuation he was bullying people, said text from him that was in no way bullying.

Its been an absolute litany of lies and smears from the press and hacks and PLP... but they keep forgetting that its possible to find the truth, publish it, and get the real facts out there almost as quick as the news can write its next lie in print.

The 4th estate is waking up to the fact it no longer is the gatekeeper of their version of the "truth", and it hates that fact. Its going full guns blazing to make sure that Corbyn doesn't win again because if he does it will be the final proof that what they write no longer has anywhere near the impact it once did. That said, there is still a large proportion of people who don't use alternative media, google, etc, so it will be interesting to see how they stack up, numbers wise, against the more informed members of the public.

Boring of me I know, but the Gulag System was built (much more firmly) atop the existing Tsarist prison camp system. Anne Applebaum writes that "by 1921, there were already 84 camps in 43 provinces, mostly designed to “rehabilitate” these first enemies of the people."

Lenin of course died in 1924, but from 1922 onward Stalin began consolidating power out from under his ailing mentor. In Russian, Gulag refers to the government agency that administered the camps during the Stalinist era not the camps themselves - but in English has come to refer to the whole spectrum of Communist prison camps (such as POW camps), regardless of whether they fell under the agency's purview.

I can see what you're driving at, but it's not so accurate as to be worth the victory.

Whilst we're on about gulags and torture...

What's the situation with the Guantanamo version?