Chris Evans, The Sun, And MONEY

The Murdoch doggies at the Super Soaraway Currant Bun have waged an incessant hate campaign against broadcaster Chris Evans from the moment he was given the job of continuing motoring show Top Gear following the dismissal of Jeremy Clarkson. Even after the series finished and Evans resigned, saying he had given it his best but it had not been good enough, the lurid stories kept on coming. 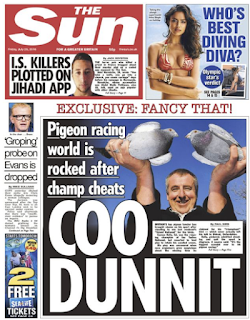 There was the routinely creepy sight of Evans being tailed by a snapper, so he could be photographed at the side of the M4 taking a pee break with a colleague, but the nastiest has been the promotion of stories concerning an allegation of historic sexual misconduct. Readers were left in no doubt that, whatever the circumstances, He Done It. But after Evans was interviewed yesterday, the case was dropped.

Curiously, the first news of the investigation being closed came not on the Sun’s website, but at the Murdoch-bankrolled Heat Street, where Miles Goslett, who had churned out so much Evans knocking copy himself, had to admit “Police have closed their inquiry into an alleged sex offence involving BBC broadcaster Chris Evans”. For some reason, no comments have (yet) been left in response to the post.

The Goslett post is short on detail, something that did not happen when Heat Street was going after Evans. Nor was the Sun backward in coming forwards with the nudges and winks, such as “TOP Gear presenter Chris Evans is to become the most high-profile BBC star to be quizzed by police over historical sex assault allegations”. Not that they’re trying to link Evans to Jimmy Savile, Stuart Hall and Rolf Harris, you understand.

The Sun even claimed “Beeb face dilemma over whether to take Evans off Radio 2 breakfast show with motor show future already under scrutiny”, which was complete crap. While we are unlikely to get an admission from the Murdoch mafiosi as to why they went after Evans, though, one question which will continue to be asked, and to which the answer will inevitably come out, is whether the paper was paying his latest accuser. 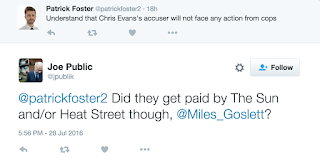 Quite apart from the participation of Goslett (“the man who exposed Savile”), there has also been some interest shown in the affair by one Patrick Foster, the hack who exposed Police blogger Nightjack and later obtained a criminal record over the affair. After Foster admitted the Evans case was being dropped, the Tweeter otherwise known as Joe Public asked “Did they get paid by The Sun and/or Heat Street though”.

That question was put to both Foster and Goslett. And it needs answering. Did any part of the Murdoch empire pay money to Evans’ latest accuser? Why was this story constantly driven forward by the Sun, with all the suggestions that the BBC were about to sack Evans? Who else was paid to slag off the presenter? And did the Sun pay that snapper, and/or any of his fellow snappers, to follow Evans?

Has the Sun been wasting Police time? It wouldn’t be the first time, would it?
Posted by Tim Fenton at 12:39

Wouldn't surprise me one bit if the Scum paid both of them.

After all, they pay the liar and coward MacKenzie and all the other jobsworth bureaucrat information clerks.

"They" of course being OzYank Rupert Murdoch.

I'm not sure what offence might have occurred here, but it wouldn't be 'wasting police time'. The situation is complex, and depends on too many factors that are currently unknown. If a contract with the alleged victim was entered into before proceedings, that would be a different kettle of fish from one entered into while proceedings were active (from the point of arrest onward). And if a contract existed, the usual form would be 'sum (x) for your story, sum (>x) if conviction results from it'. Whether or not this was disclosed to the prosecution and defence in a timely matter would also play a part in whether it was above board or not.

Astonishingly, this sort of thing is actually permissible in law, with the proviso that the payment (or contract) is agreed in order to serve the public interest. (Debatable here but not automatically excluded).

As for whether a contract existed in this particular case, it does seem likely, since the alleged victim has spoken to Heat Street. Whether we'll ever find out what that contract contained, and whether it was in any way fishy, is another matter. Typically, such contracts have gagging clauses to protect the scoop that the purchaser is buying, and these can be pretty extensive in their scoop.