After the EU referendum, it became clear that some parts of the UK had voted by a significant margin to Remain, one of those parts being Scotland. As a result of this revelation, First Minister Nicola Sturgeon has been to Brussels to explore ways in which an independent Scotland could remain part of the EU. There is majority support in the Scottish Parliament for calling another independence vote. 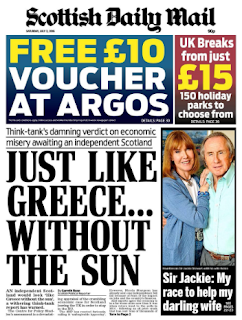 This prospect has alarmed the London-centric press, and one result has been a scare story given lead billing in the Scottish edition of the Daily Mail this morning. The thundering headline spells it out: “Think-tank’s damning verdict on economic misery awaiting an independent Scotland … JUST LIKE GREECE … WITHOUT THE SUN”. The report is described as “withering”. But there are problems with the claim.

The “report” is from the Centre for Policy Studies (CPS). This is an anti-EU lobby group. It was co-founded by Margaret Thatcher, Keith Joseph and Alfred Sherman, the latter being a steadfast proponent of closing the rail network and turning the routes into roads, an idea that the CPS occasionally dusts off and rehashes, but which has been proved to be bunk. The CPS’ objectives include preserving the Union between England and Scotland.

The “report” which underpins the CPS claims is not a new one. It was prepared in the run-up to the Scottish independence referendum in 2014, as a means of frightening Scots voters away from voting Yes. You can see a summary at the CPS’ website HERE.

That “report” has a very obvious Achilles Heel. This is the second of three independence risks it identifies: “The probable flight of a large proportion of the financial services sector from Scotland - as already indicated by this week in the announcements by RBD, Lloyds, Clydesdale and Standard Life - could leave 2016-17 ex-North Sea revenues (of £47.7bn) about £9.2bn lower than has been forecast by advocates of independence (£57.3bn)”.

Were Scotland to remain in the EU and England leave, the “flight … of the financial services sector” would most likely not only not happen, but if it were to happen anywhere in the UK, it would be the other way round from that outlined by the CPS.

The £13.8 billion “black hole” that the CPS claims would appear over time in the Scottish budget would therefore be somewhere between a lot smaller - or non-existent!

The CPS has cherry-picked figures to fit the conclusion it had already reached, something with which Zelo Street regulars will be familiar, as this tactic is also used by the so-called Taxpayers’ Alliance - and other Astroturf lobby groups in and around the Westminster village.

Until and unless the CPS, TPA, and the rest of those groups, and their compliant pals in the right-leaning press, come up with a full and coherent balance sheet for what Scottish independence within the EU might mean for the country’s finances, voters there and elsewhere in the UK should take these scare stories strictly on their merits.

Which means, in the case of this one, no merit at all. Another one for the bin.
Posted by Tim Fenton at 10:51

Nobody with a brain and common sense as their guide believes a word coming out of neocon trash cans like "Policy Studies" and "Policy Exchange," both of them responsible for manufacturing a far right Thieves Charter and accompanying propaganda.

As an Englishman, I was downhearted at the Scottish movement for secession from the Union. But I fully understand it and have much sympathy for the feelings behind it - though none at all for the nationalist element. Nothing good ever came out of nationalism.

Scotland, of course, would survive as a separate nation. The only questions are: What KIND of nation, and how, if it adopted radical policies, would it endure inevitable attacks from the IMF , World Bank and other international instruments of organised capitalism? The likelihood is that nationalism would follow the usual route to compliance and Scotland would be that much weaker directly because of it. It would be a sitting duck like, yes, Greece.

You need only view a rerun of a BBC TV interview of Nicola Paget by that disgusting sweaty tub of Murdoch neocon lard, Andrew Neil. At the end of it he muttered a scarcely concealed threat that, "I'd like to see you after the IMF get through with you."

But here's an interesting and entirely unlikely suggestion: Why not form a radical Celtic Union of Scotland, Ireland, Wales and all English regions outside the M25 ghetto, fuck London and its "services" off to Washington where it belongs, join the EU, and help throw out all the thieving bankers and the other leeches. That would loosen more than a few capitalist bowels and, delightfully, send lying propaganda clerks like Neil, Murdoch and the Daily Heil hurtling down the shitter without a life jacket. It won't happen of course, but we can dream.

The truth is the SNP is no more equipped to deal with current disintegration than any other organised nationalists. At the present rate they will discover soon enough that waving a flag, singing nationalist songs and becoming Little Scotlanders will make them just as outmoded and absurd as the awful English version. More to the point, it will make their situation even worse, not better.

These times are more than "interesting." They are positively dangerous.

Really? I was under the impression that the SNP no longer have a majority and all opposition parties oppose independence - could you clarify please?

Also, wouldn't this have to be authorized by the Westminster government, as indeed the original one was?

Not according to the current Scottish Green Party manifesto. "In a second referendum the Scottish Greens will campaign for independence."
There are 63 SNP MSPs and 6 Green MSPs. There are 59 presumably unionist MSPs (Scottish Conservatives, Labour and Lib Dem).