Here on Zelo Street, no favour is given to the great and the good of journalism, and that includes Murdoch shilling-taker David Aaronovitch, whose wrong calls on Byline Media and the John Whittingdale story were grist to my mill. But when he Tweeted “The govt can't guarantee that EU citizens can stay in the UK because WE HAVE VOTED TO LEAVE & MUST NOW NEGOTIATE. All else is bullshit” yesterday, he was spot on. 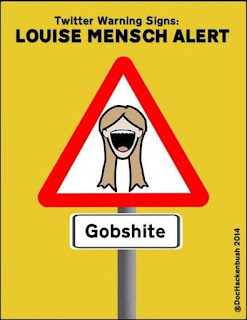 Some Tory Party leadership candidates have indicated their support for such a guarantee. So doesn’t that invalidate his assertion? Well, no it doesn’t, because that is what they would aim to do as part of negotiation after triggering Article 50 of the Lisbon Treaty. So right now, the Government is indeed unable to guarantee anything, although of course EU nationals may stay put until negotiations are concluded. 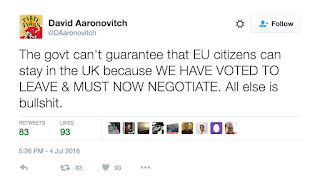 This reasoned and factual approach was not universally popular, especially with those wanting to obsessively troll The Great Man as part of their general attention-seeking demeanour. And that brings us, inevitably, to (thankfully) former Tory MP Louise Mensch, who immediately took issue with Aaronovitch. “Why are you scaremongering? Is Remain that morally bankrupt? We can grant indefinite leave to remain at will”.

We’re still in the EU - something Ms Mensch manages to miss - and cannot unilaterally change what happens under the terms of the Single Market and its associated freedoms. This did not stop her immediately upping the troll tempo in her usual inimitable style. “David, you just lied that the Government cannot admit EU citizens living here. We can do so at will. Remain lies don't stop”. Everybody else lies bar her. 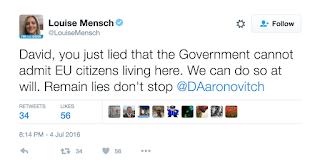 Aaronovitch had not said that. Moreover, he was right and she was wrong. He was also right to say “Go and abuse someone else. I have had enough. This was, always, about negotiating with others. That’s why you can’t bear it”. Negotiation is a strange and difficult place for the likes of Ms Mensch, who digs her heels in before, indeed instead of, listening. 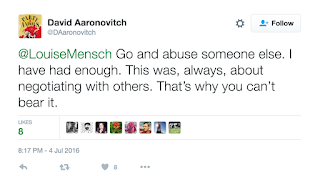 In any case, the real point of the Mensch troll attack was not merely not listening, but also to promote another of her dirges for the pisspoor Murdoch-bankrolled Heat Street, which she duly confirmed: “David I have written an article saying Theresa May is in it to scupper #Brexit here”. Here, she claims not to be making any personally derogatory comments about Ms May, yet accuses her of lying at the very start. 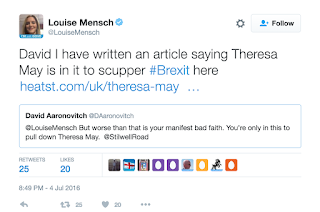 Moreover, Ms Mensch has gone so totally Hatstand she thinks that the UK can choose which EU leaders it negotiates with (she thinks we can select Angela Merkel). On top of that, she’s cursed Michael “Oiky” Gove’s sinking campaign much in the same way that she cursed Marco Rubio’s abortive run for the Republican nomination. 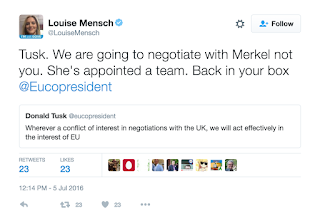 She is unable to accept straightforward facts, cannot grasp the concept of negotiation, cannot stop saying things that are not true, and cannot stop accusing others of lying at the same time. Louise Mensch is a joke. And remember, they allowed her to become an MP.
Posted by Tim Fenton at 13:30

I thought David was polite, accurate and measured considering Mensch appeared to be trying to invoke her delightful trolls to his timeline and make something true by just repeating it endlessly.

A stopped clock may be right twice a day if a twelve hour one or once for a twenty four one.

Unfortunately Mensch, financed by foreign owner Murdoch, cannot be stopped. Therefore she cannot be right at any time of day.

Is Mensch still in the US? If so, why is she writing as though she's not?