IPSO CEO Gets Teed Off

Our free and fearless press is, mainly, regulated by a body calling itself IPSO, which stands for Independent Press Standards Organisation. This is meant to show unbelievers that this relatively new body is properly independent, unlike the discredited Press Complaints Commission (PCC), which certainly was not. But there is one problem with IPSO, and that is that it is not independent at all. 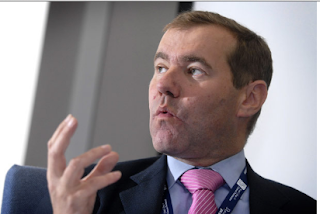 What's that on the wall? MENE MENE TEKEL UPHARSIN ... What's that all about? Bloody migrants get everywhere

IPSO is funded by the Regulatory Funding Company, which is controlled by that part of the press which signs up to IPSO’s regulation. So if the allegedly independent regulator goes off-piste, it can be brought to heel in very short order simply by having the RFC turn off the money tap. IPSO is a press puppet, and does as it is bloody well told. Worse, its CEO, one Matt Tee, has also shown that his impartiality is non-existent. 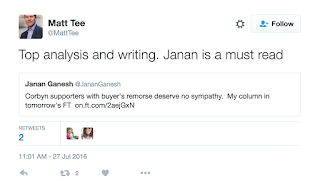 Tee, whose latest media outing included the priceless claim that “Migrants as such are not a group that can be discriminated against” - try telling that to the Mail, Express, Sun and several other titles - has been excusing IPSO’s inability to do anything about pro-am motormouth Katie Hopkins’ Sun column comparing refugees to cockroaches, offering the suitably lame excuse that the regulator cannot stop bad taste being published.

You see, bad taste is not covered by the Editor’s Code, a document that is in any case not worth the paper it is sometimes printed on, as the press manages to ignore it when push comes to shove, with IPSO then wiping their collective backsides. Yes, Tee was in proper hand-wringing mode, but later became positively Napoleonic when challenged over his clear lack of impartiality - a discussion with a very revealing conclusion. 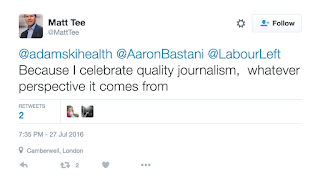 After Tee had openly advertised an article in the FT which made partisan political comment, Tweeting “Top analysis and writing. Janan is a must read”, another Tweeter questioned his judgment: “why is the head of the ‘neutral’ press regulator sending out supportive Tweets on anti Corbyn pieces?” Good question. Would the IPSO CEO care to respond? “Because I celebrate quality journalism, whatever perspective it comes from”.

Not as CEO of IPSO, you don’t. His inquisitor came back with “Okay, but if I was the press regulator I wouldn’t comment on party political comment”. Privately, yes, but not on an open Twitter feed. What did The Great Man have to say to that? Tee summoned up all of his intellectual reserves and declared “And I am and you're never going to be”. He can be as partial as he likes, and with no risk that anyone will do anything about it.

Indeed, once can almost imagine Tee - another of those immodest men with much to be modest about - attired as Napoleon and declaring “L’IPSO, c’est moi”. There was never a more outstanding example of IPSO’s sheer uselessness, combined with the breathtaking arrogance of its placeman CEO, than Tee’s Twitter outburst, coming on the back of his excuse-making for more of that incitement which masquerades as journalism.

IPSO is the PCC, er, fluid in a differently labelled bottle. That’s fluid, as in the kind of fluid that Matt Tee is so full of. In addition to the wind that goes with it.
Posted by Tim Fenton at 13:07

incidentally, it's Louis XIV who said "l'Etat, c'est moi"
Louis XVI (his great-grandson) was the one pushed over by the revolution
... and then came Napoleon, who prefer to liken himself to the roman imperator than the french upper aristocracy

So if the allegedly independent regulator goes off-piste, it can be brought to heel in very short order simply by having the RFC turn off the money tap.

This could only be achieved by de-registering from IPSO regulation and 'going rogue', which wouldn't look good to the public. Moreover, one paper making a break for it wouldn't end IPSO's funding stream outright. The only way to step on IPSO's windpipe would be for every publication to withdraw at once -- and the circumstances in which that would be acceptable are very limited.

You're presenting this as though the press have IPSO over a barrel. In fact, the press funding of IPSO was conceived as a form of 'community service', of demonstrating that the press have clean hands (or at least implying it!). So far, the only dissenters have been Richard Desmond's titles, and their total lack of journalistic credibility is not something more respectable papers will be hurrying to emulate.

"which wouldn't look good to the public. "

The general public, those who "read" the tabloids, probably wouldn't know of IPSO or even care that much if they did. Why do you think they continue to buy them?
They like their prejudices being caressed ie, the gossip about their football team and celebs.

"the press have clean hands"

IPSO couldn't prove this in any event as the main villains are those that suppress stories for favours done and IPSO can't do much about that. (Listen to the Untold: The Daniel Morgan Murder podcast for the worst case of corruption involving police, politicians and media and ask yourself why haven't our wonderful media, with a few notable exceptions, covered it?)


The general public, those who "read" the tabloids, probably wouldn't know of IPSO or even care that much if they did. Why do you think they continue to buy them?

But by the same token, it obviously matters a great deal to the management, or why would they have bothered signing up in the first place? You're right that few people follow the 'metamedia' (things like IPSO, the Press Gazette, the 'Street of Shame' pages in Private Eye, etc) but enough people do follow them for word to get round fairly quickly.

"matters a great deal to management"?

Well there was a bit of an outcry after Leveson to do something and why wouldn't management sign up if they knew IPSO would be under their control wih people like KavNaff on board? The corrections to downright, let us say misrepresentations, still occur but in small print and too late to shake the original impression planted in the mind of their readers. The prime recent example being corrections made after the refendum, their achieved result having been obtained.