If readers of the Super Soaraway Currant Bun were not already persuaded that the paper’s editor Tony Gallagher was not exactly in touch with all those ordinary hardworking people the paper claims to speak for, today’s front page splash will have put them straight. While there has been no shortage of national and world events to drive the Murdoch agenda, the Sun has instead gone on another desperate BBC bashing binge. 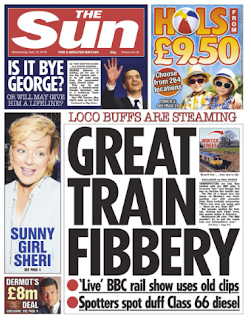 And this Beeb-bashing bonanza is bizarre in the extreme, with readers told “Loco Buffs Are Steaming … GREAT TRAIN FIBBERY … ‘Live’ BBC rail show uses old clips … Spotters spot duff Class 66 diesel”. Er, WHAT? There is political upheaval across Europe and North America, conflict across the Middle East, more sport stories than you can shake a stick at, and here’s the Sun devoting its front page to … a trainspotting show!

Even on the BBC website, you have to search to find the blurb for Trainspotting Live! which has been shown this week on BBC4, fronted by the evergreen Peter Snow. The programme itself is broadcast live, but not everything of interest to enthusiasts that happens on the National Rail Network is going to occur within a pre-planned one-hour period. So it was inevitable that some of the footage would not be live.

This has not deterred the Sun, which after all is not concerned with rail buffs, but bashing the hated BBC: “IRATE trainspotters have accused the BBC of treating them like fools - by screening five-month-old loco footage and claiming it was live … Host Peter Snow excitedly announced the film of a Class 66 diesel during Monday night’s new BBC4 show Trainspotting Live - suggesting it was happening then and there”.

Isn’t it amazing how the Murdoch doggies suddenly become knowledgeable on the minutiae of a subject that they would quite happily spend the rest of their time ridiculing? Sadly, the number of those “anoraks” the paper has managed to find who criticised the Beeb - the inmates of the Baby Shard bunker clearly haven’t met any rail buffs of late - is just two. Plus someone who said enthusiasts are very observant.

Still, readers do get a reminder that “In October the BBC admitted footage of a volcanic eruption screened as part of its natural history series Patagonia: Earth’s Secret Paradise was faked … The scene, supposedly showing a volcano erupting and lightning breaking through the clouds, was made by putting eruptions from two different volcanoes together - one in 2011 and the other in 2015”. Well, big sodding deal.

But this is a horribly lame story. And the Murdoch mafiosi won’t be rushing to tell Sun readers about all the rail fans complaining about their ill-informed headline. What might be wrong with it? Two things here: one, there was nothing “duff” about the locomotive in the disputed film, and two, had they actually asked an enthusiast first, they would have known that the word “duff” means something else in trainspotter speak.

What does it mean? I should do your job, Sun hacks. DO YOUR OWN RESEARCH. And get yourselves an editor who has a better relationship with the real world.
Posted by Tim Fenton at 10:14

Reminds me of a letter in Viz, from the time of the Blue Peter 'fakery' case of 2007:

I believe in the literal reality of everything I am presented with on TV and have no comprehension of basic programme-making and broadcasting techniques...

by coincedence I've just be talking to a friend about a Sun foray into the world of rail travel -the Emille Ghesson train ride across europe! Pots and kettles........

They won't let me buy the BBC. So fuck them !

After all, they lied their heads off about those two tragedies for almost a quarter of a century. So they must have some sort of "expertise" on the method. You know, like Josef Goebbels did.