A leadership contest has taken place in the Tory Party, and has been resolved with the kind of ruthless speed for which The Blue Team is renowned, with challenger Andrea Leadsom deciding not to continue her campaign, to the relief of those who wished she had not started it in the first place. But no such swiftness is being allowed to hinder the Labour Party’s battle, as the fight begins to depose Jeremy Corbyn. 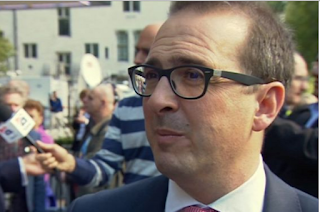 Did I say that? YES YOU DID

Strangely, none of the other figures who took part in last year’s Labour contest are going anywhere near the current one: Andy Burnham is occupied trying to secure the Labour nomination to contest the election for Greater Manchester Mayor, while Yvette Cooper, Liz Kendall and Chuka Umunna have all decided to sit on their hands and leave the field to, well, a distinctly second-string pair of hopefuls.

Jockeying for position right now are Angela Eagle, who represents Wallasey, and whose CV features work for the CBI and a Trades Union, and Owen Smith, who sits for Pontypridd, and whose work experience is as a BBC producer, a SpAd, and a lobbyist. Neither are well known outside the Labour Party. Ms Eagle has some junior ministerial experience; Smith, who entered the Commons in 2010, has none.

Smith, though, talks the talk, but sadly for him, this also includes not being media savvy enough not to appear to open mouth and insert boot, as witness yesterday’s Evening Standard headline “I’m normal. I have a wife and children, says Labour challenger Owen Smith”. Angela Eagle, as is well known, is gay and in a same-sex relationship. So the result of Smith’s latest press coverage has not been a good one. 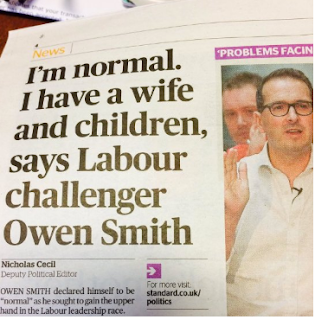 Did his comments, made in a broadcast interview, stand up that headline? It seems they did: “I’m glad you think I’m normal. I am normal. I grew up in a normal household. I’ve got a wife and three children. My wife is a primary school teacher … I’ve been in Parliament for six years, before that I had two or three other jobs, in business, in politics and advising the peace process in Northern Ireland”. Oh dear!

Is there a spin doctor in the house? “He was just trying to say that he is an ordinary person, proud to live and represent his own community in Parliament”. That’s all very well, but as the Standard article point out, “he risked controversy with his remarks as they come just days after Andrea Leadsom suffered a severe backlash after highlighting how she had children while her then Tory leadership rival Theresa May did not”.

Worse, Smith has probably alienated a significant part of his own electorate - not just LGBT Labour members, but those who have formed the opinion that he said what he did in order to put one over on Ms Eagle. This leadership contest will drag on until September, by which time Theresa May could well have figured out how to work the Fixed Term Parliament Act to allow her to call a snap General Election.

These are not good times for Labour. Owen Smith shows little sign of making them better.

[UPDATE 1750 hours: Angela Eagle has now conceded that Owen Smith has secured more nominations from MPs than she has, and in order to provide one "unity candidate", has withdrawn from the contest and will back Smith.

But after Smith's less than totally well-received gaffe yesterday, his candidacy does not exactly inspire confidence. Would he be able to unify the Labour Party (barring Corbyn, McDonnell and their pals)? Only time will tell. Roll on the leadership election]
Posted by Tim Fenton at 12:52

Well, No, I didn't know Angela Eagle is "gay," or that Owen Smith is "normal." Largely because it has fuck all to do with me or how I choose to lead my life.

Nor does it have anything to do with the politics either of them choose to visit on the rest of us.

My bet is that both of them are far right suckers, mere stalking horses, while other traitors like Benn, Burnham, Umuna, Cooper and all the rest of the motley New Labour crew wait for what they hope is the simple task of picking up the pieces.

Except that the game is up for the New Labour mindset even if they re-emerge in the longer term . The geni is out of the bottle and it won't go back. Nobody, but nobody is going to forget or forgive their mass murdering, warmongering or betrayal of Labour Party founding principles. They've shot their load. The best the motley crew can hope for is the "success" of an increasingly desperate plethora of lies and PR bullshit. Either that or they disappear down the same sewer as the SDP.

Benn of course is the main plotter, an appalling piece of self-ambitious right wing slime with the ethics of weasel on heat. Whether the weasel is "gay" or "normal."

Not to forget that tory ringpiece McTernan and his "strategies" - which did so well in the last two elections and lost Scotland into the bargain.

Yeah, a real genius that McTernan. Does a bang up job of warmongering and fucking up.

I think that Angela "woman - northern - strong - mother was a seamstress" Eagle also shot herself in both feet...

Firstly she had Hilary "bomb them, bomb them all" Benn write an article for her in which he anointed her as his official puppet candidate... Then as if that wasn't bad enough, the paper that ran the anointed article was (don't forget that Angela "woman - northern - strong - mother was a seamstress" Eagles constituency is in Liverpool)... oh go on, you can surely guess which paper it was... yes the article was in the S*n. (JFT96) Obviously the double wammy ("Bomber" Benn & the S*n) did not go unnoticed, nor did it go down well.

I would go as far as saying, not only did she shoot herself in the feet... she did it twice - with both barrels each time.

My understanding is that one way to call a General Election under the Fixed Terms Parliament Act is to invoke a vote of no-confidence in the Government.

The Government votes against itself stating clearly this is to simply engineer a General Election under the rules. Then there is 14 days to form a new government - if no government then GE.

The Professor 19 July 2016 at 16:10 might be rather hopeful about the 50+ majority, but then again, is that reflected in the polls? Labour can disenfranchise ppl from voting for leader, tho not at the G.E. Once the Blairies implode, maybe a better Labour Party will lead again?