While the legendarily foul mouthed Paul Dacre and his obedient hackery at the Daily Mail continue to trawl through every recent instance of convicted paedophiles so they can add them to the charge sheet against three senior Labour Party figures, the temptation for other media outlets to jump on the lefty-bashing bandwagon has proved irresistible – especially at the Maily Telegraph. 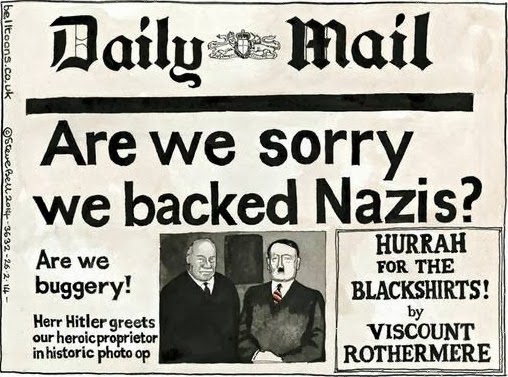 Here, Christopher “No” Hope is the lead name on the by-line of a particularly well-crafted but extremely nasty piece titled “New evidence casts doubt on Harriet Harman's defence over paedophile links” with the sub-heading “Claims Miss Harman has nothing to apologise for over involvement of civil rights organisation she used to work for with a paedophile rights campaign are thrown into doubt by new internal documents obtained by The Telegraph”.

The “doubt” is sown purely through a guilt-by-association approach, together with crafting a form of words deliberately designed to con readers, as will be shown later in the post. Hope sets great store in the National Council for Civil Liberties (NCCL) only having 12 staff in the late 1970s. Thus they all knew one another.

This is reinforced by a rambling analysis of Ms Pollard’s assertion that “NCCL should oppose the Protection of Children Bill”. But Ms Harman – referred to by the anally retentive Telegraph hacks as “Miss” – was opposed to this view and backed the legislation. So the smear rests on that form of words.

Ready? Here it comes: “The archive also contained a handwritten note from Miss Harman to Miss Pollard dating from the late 1970s, as well as a copy of PIE’s constitution – dating from March 1975 – detailing the aims of the group including a pledge ‘to campaign, as members see fit, for the legal and social acceptance of paedophile love’”. Read quickly, that might sound like Ms Harman is somehow connected to the aims of the Paedophile Information Exchange (PIE).

But all it shows is that her handwritten note to Ms Pollard was found in the same archive as a copy of PIE’s constitution. That is the Telegraph’s grounds for asserting that Ms Harman’s claims are “thrown into doubt”. And, of course, they were all working in the same office, and so they must all have been at it. Nudge-nudge, wink-wink, a nod’s as good as a wink to a blind bat, and all that.

Christopher Hope put his name to that? What a truly desperate individual he is.
Posted by Tim Fenton at 10:50

You seem to have conveniently omitted that Harman allowed Blair to turn the UK into a police state.

Must be getting close to election time again.

Some comments are allowed, even when the sentiment expressed therein is beyond Barking.

Desperate was the first word that sprung to my mind too. Well, apart from 'disgusting.'