There are some features of Daily Mail storytelling that should put one on one’s guard: one is to treat anything declaring “The Truth” to be suspect, another is that recycling the paper’s own stories no more than two months after the event is a sign of deliberate intent, and a third is that when all of this is backed up by an item in Daily Mail Comment, it has been personally ordered by Paul Dacre. 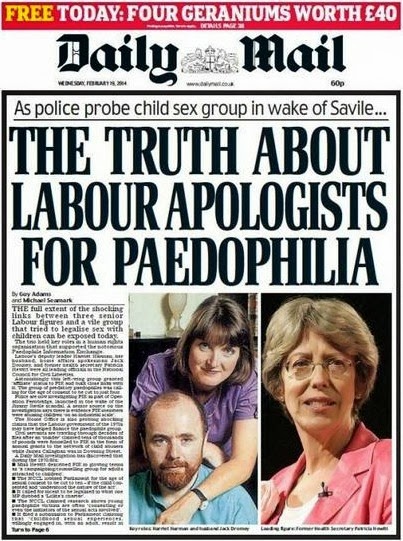 So it is with today’s front page lead, which declares “The Truth About Labour Apologists For Paedophilia”, more or less repeating a story run in December last. It is backed up with a Daily Mail Comment piece titled “The Labour elite who gave succour to paedophiles”, demonstrating that the Vagina Monologue has personally ordered the attack.

Why should the Mail’s legendarily foul mouthed editor order another assault only two months later? Ah well. Clearly, the initial kicking, aimed at Labour deputy leader Harriet Harman, her husband Jack Dromey, and Patricia Hewitt, was ineffective. And Mil The Younger and his team are still ahead in the polls – a lead that shows little sign of disappearing this side of the General Election.

Dacre dislikes most politicians. He detests the Lib Dems. And he despises Labour with a passion, reinforced by his boiling anger at a world that refuses to be bent to his will, a fault he ascribes to any politician not of his favoured stripe. But perhaps there is some substance in the story? Sadly for Dacre and his obedient attack doggies, this may not turn out to be the case.

The Mail hangs its accusations on the fact that its three targets were involved with what was then called the National Campaign for Civil Liberties (NCCL). The group is now known as Liberty. A paedophile group called the Paedophile Information Exchange (PIE) became affiliated to it. However, and in this kind of story there is inevitably a however, how this occurred is not clear.

Indeed, Liberty’s current Director Shami Chakrabarti has told “NCCL had to expel paedophiles from its ranks in 1983 after infiltration at some point in the Seventies” [my emphasis]. The Mail is peddling the idea that PIE was somehow welcomed into the NCCL. But then again, it is also labelling PIE a “far-Left lobby group”. The link is a deliberate one: left equals Labour and also equals paedophiles.

“It should be studied as an object lesson in the way the liberal Left offered moral underpinning to a group that validated the vile crimes of monsters like Jimmy Savile” thunders Daily Mail Comment. But the real object lesson is how Paul Dacre is trying his damndest to damage the Labour Party so as to get his least hated politicians elected. Ms Harman’s message is “This story is untrue and ridiculous”.

And, last time I looked, Paul Dacre was not the law. It’s a cheap and nasty smear.
Posted by Tim Fenton at 10:36

That'll be the Jimmy Savile in their headline: that'll be the one who spent how many Christmases at Chequers with Margaret Thatcher?

And was put in charge of Broadmoor by Edwina Currie.

Neil Wallis seems to have hit on this story to have a go at anything on the leftish side of politics.
Perhaps he is expecting revelations relating to the rightish side of things and getting his late tackles in early?

Strange there's no mention of Leon Brittan who was, you know, actually the Home Secretary at the time and failed to ban PIE