We Can’t Get No Satisfaction

The Autumn 2013 National Rail Passenger Survey (NRPS) from Passenger Focus brought cheering news for train operators across the UK: all of them scored a satisfaction rating of over 75%, with only Southern, Northern Rail and First Capital Connect scoring less than 80%. We rail travellers were clearly a happy bunch. And then came the latest rail passenger survey from Which? 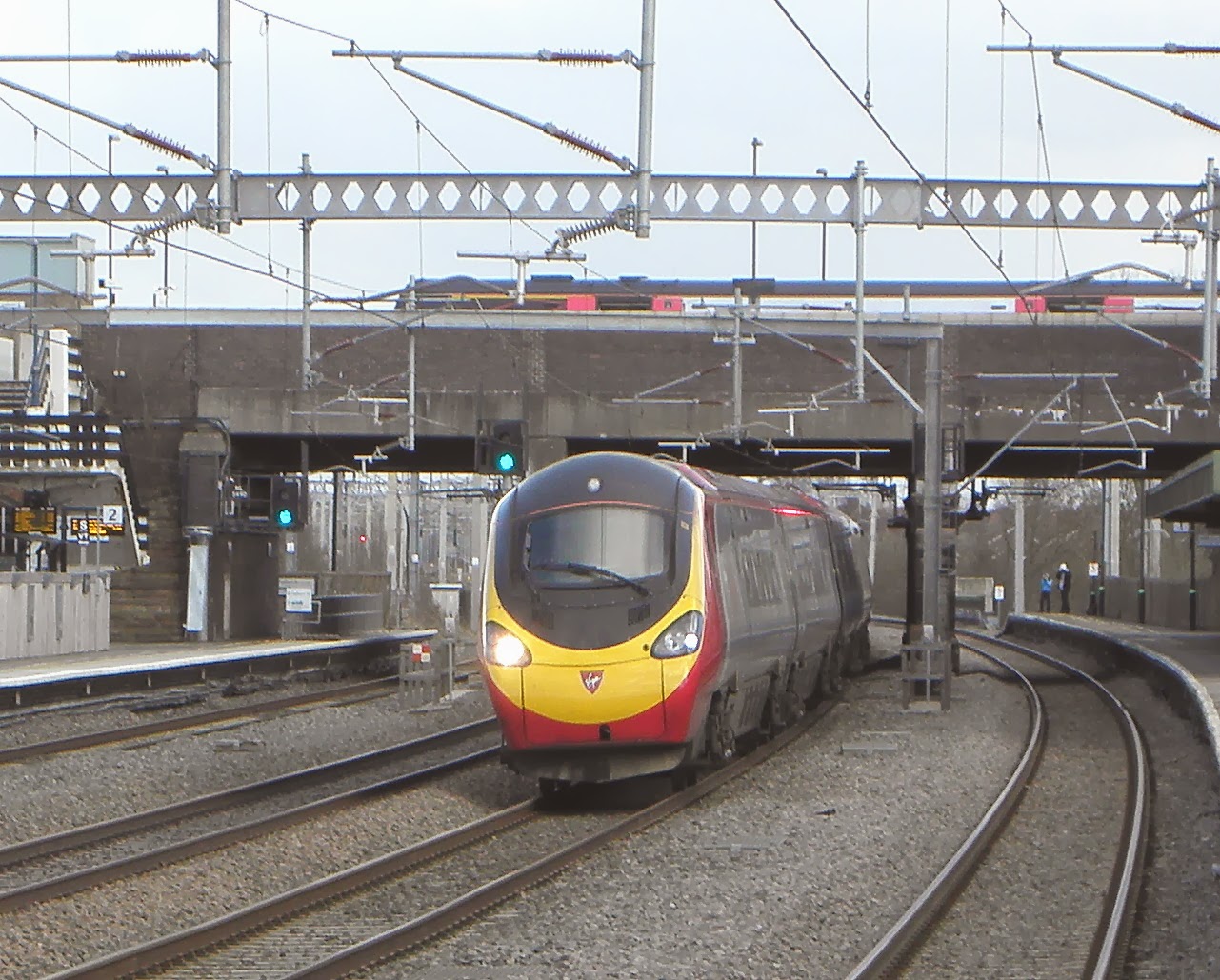 “Rail Satisfaction Levels Drop Below 50%” announced Sky News (“first for breaking wind”), as it became clear that we rail travellers weren’t so happy after all. The Sky report had homed in on the ten operators who were short of a 50% score (as opposed to the nine who bettered it). The problem? “delays, high ticket prices and not enough seats are behind a slump in satisfaction with UK rail companies”.

Well, there’s a surprise. It would not have helped those train operators that the Which? survey had been taken at a time when the rail network was suffering the effects of the recent spate of bad weather, and that, as the Guardian has pointed out, “Respondents were polled in early January, soon after the latest price rises”. Rail travel is becoming ever more expensive. 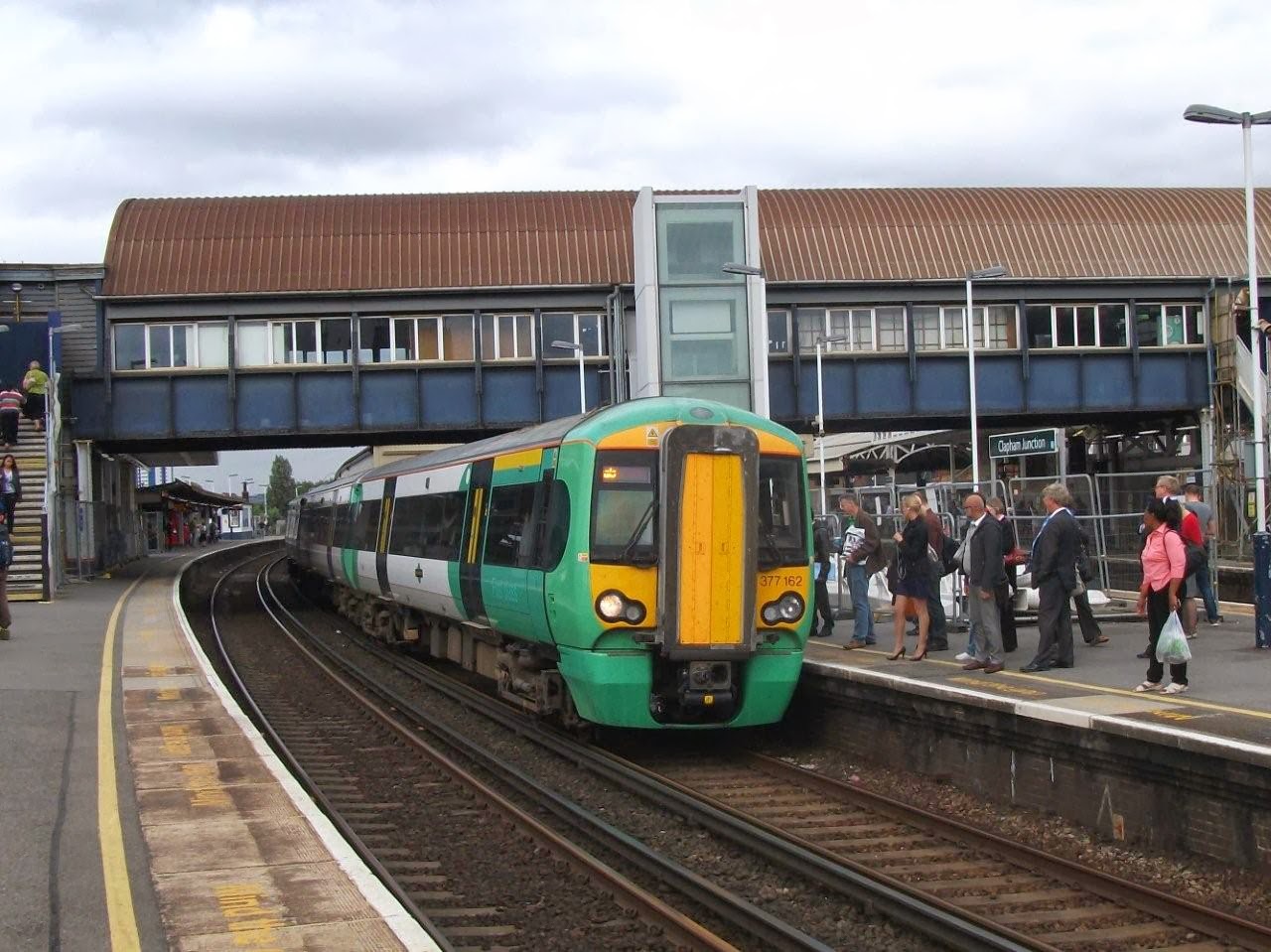 So who was top of the pile? To no surprise at all, two of the top three performers – Merseyrail and c2c – operate on tracks largely segregated from the rest of the rail network. This means fewer delays. A more or less homogenous fleet means better reliability. Frequent services mean less hanging around. And Merseyrail is not the most expensive for ticket prices.

Best long distance operator was Virgin Trains, 5% ahead of publicly owned East Coast. The difference? No, not private sector enterprise, but a newer fleet and less bad overcrowding (travelled East Coast at busy times? Don’t even ask about it). But new fleets do not mean satisfaction: South West Trains, mostly using Herr Siemens’ finest rolling stock, was down in the mid-40s. 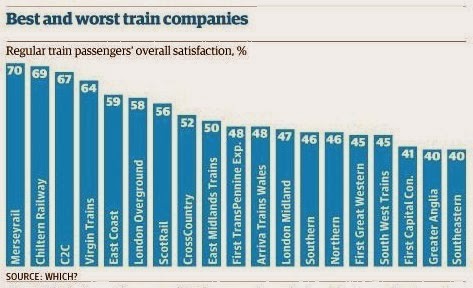 Roll of shame (from the Guardian)

And at the very bottom of the heap were First Capital Connect on 41%, with Greater Anglia and Southeastern on a miserable 40%. That is just dire, especially when you consider Greater Anglia contains part of what used to be BR InterCity, and Southeastern the domestic high speed services on HS1. So why such bleak news? After all, there are price rises every year now.

Simples. Train operators have very little leeway in how they run their franchises. Government specifies what they can and cannot do, and after all, that is where the subsidy most of them get is coming from. Trains that have not been refurbished for several years are harder to keep clean. More demand but no more seats means more overcrowding. So jacking up the cost just makes it worse.

Yes, it could be cheaper. But would we all vote for more subsidy? Maybe not.
Posted by Tim Fenton at 13:15

I'm still waiting for a response from northern after I complained in early November over how long it takes to buy tickets at barrier stations due to their guards deciding selling tickets on trains is too menial.

Despite a 20 day target to respond they didn't. I chased in early Jan and am still waiting.

One of the big problems is that people look at the results of these surveys and then try to make the railways fit to get better results. It won't work.

A company that mostly carries commuters will never get a high rating. Commuters* are dragging themselves out of bed before it's light to go to a job which they often hate. In the south they live stupid distances from the job so, not unreasonably, have to pay more than a local bus fare to get to it. Quite simply they are not happy about being on the train in the first place and whatever the train operator makes good they will find something else to moan about.

This then has an unseen affect on the companies who don't have high proportions of commuters by sometimes unfairly bouncing them UP the league table. Hacks then compare chalk with cheese (apparently it's almost a criminal offence for journalist to know anything about railways before writing a story*....) and this just reinforces the views of the commuters.

The surveys need a radical alteration, for a start they should be sorted by the type of passenger. Everyday commuters, random business travel, leisure travel. The latter group has an opposite effect on the stats. Off peak leisure travellers are off on a jolly outing which they are looking forward to (and by definition, are not going to work). They will be in a good state of mind when they arrive at the station and won't even notice if the train is 5 mins late. Even with off-peak discount their penny per mile fare could be as high as the commuters season ticket - but compared to the entry fees and food prices they will encounter later it seems good value.

To ask these different groups the same questions without understanding their state of minds is asking for trouble. At the very least results should be sorted by group - compare Virgin commuters with FCC commuters and I suspect the gap in the results will be a lot smaller. Or compare SWT daytrippers with Grand Central daytrippers.

And it has to be said their is one type of passnger who shouldn't be asked for opinions. Some people use trains for convenience, or ecological reasons or even value (yes there are!). But some are there because they are too thick to find their own way by road and National Express can't help them! If someone thinks that Leeds might be on the way from Manchester to Cardiff, or that Wales is between Bristol and London
(just a couple of genuine passengers I've met) should their opinions of the railways be allowed to count for anything?

And don't get me started on delay stats! Long distance operators are allowed 10 minutes before being classed as late, regional operators only get 5 - but that's never mentioned in newspapers. And it is split by official company class not actual train, a Virgin trip from London to Birmingham is long distance but LM and Chiltern do the same as regional! And then there's the extra padding at the end of the trains journey to fiddle the facts, most Virgin London- Crewe- Manchester trains are late at Crewe but because of the padding can be officially on time at Manchester. The destination of the train is where the stats count - tell that to the people travelling to Crewe!

* To prove my point see how few journalists can explain the difference between commuter and ordinary passenger.