So Farewell Then Trending Central

Last July, a new group blog passed before my inspection: Trending Central, a name only marginally less credible than its creator, Raheem “call me Ray” Kassam, who told of “content you’ve gotten used to me bringing you, but with more of an edge ... fast-paced, interesting news items”. I concluded “Pencil in July 2014 for Trending Central’s first birthday, folks. If there is one”. 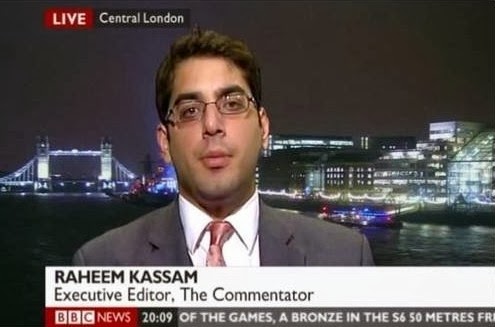 There was good reason for forthright scepticism: Kassam had launched his happening new venture after a falling out with Robin Shepherd, the humourless publisher of The Commentator – which is still struggling on, though goodness knows who bothers to look in on it nowadays – but was treading the same path: “pro-free markets, pro-democracy, pro-Western and pro-Israel in its outlook”.

Just how many times could the potential audience warm to having the same old nut-jobbery rammed down their throats? Even Damian Thompson, editor at the bear pit that is Telegraph blogs, was dismissive: “territory laboriously covered by [The] Commentator, Standpoint, D Murray etc ... There’s a whole breed of attention-seeking young right-wingers who want instant stardom without any apprenticeship”. 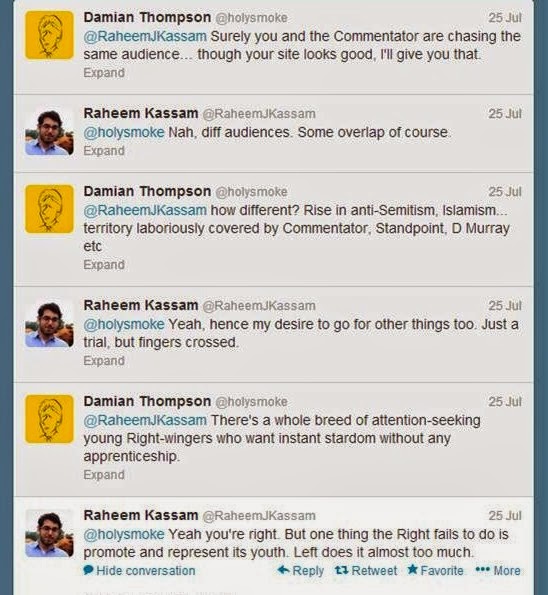 Well, with the appointment of “Ray” Kassam to the post of “managing editor” at Breitbart London (I doubt that Kassam could manage an act of alcoholic derangement in an EU wine lake, but hey ho), it seems Thompson’s dismissal, and my conclusion, were rather closer to the mark than we may have thought: Trending Central appears to have ceased publishing new material.

Only one post has been published this week, and that was to let the readership know the wonderful news about Kassam’s appointment to the Breitbart site. The Twitter feed is advertising Breitbart London. Kassam’s “Editor’s blog” has not been updated for almost a month. Trending Central can hardly claim to be the “fastest-growing group blog” if no new content is appearing on it.

Yet no announcement of its demise has been made. So let me assist “Ray” and his supposed string of “contributing editors” (meaning those who are allowed to publish their blogposts directly to the site, rather in the manner of The Spectator). A blog without regular addition of new content isn’t going to attract much attention. A group blog in the same boat will quickly get left behind.

Trending Central is dead. Morte. It has lasted less than seven months. The only interest now will be how long it takes Kassam to come clean and admit it. For his sake, it is hoped the venture capitalists rumoured to be behind Breitbart London are more patient than that. My initial feeling is that they will not be: these are not charitable institutions. So get your diaries out, folks.

Pencil in 2015 for Breitbart London’s first birthday. If there is one.
Posted by Tim Fenton at 17:38

To be fair, they'll have seen Cameron simper his way into No.10 after a bit of a stint with an advertising agency, and the likes of Hunt and Gove appointed ministers on the grounds of little more than a spell up Rupert's rectum, so it isn't as if there's no precedent.

Kassam is simply lying there about 'The right' failing to promote its 'youth'. The problem is, there isn't much 'youth' at all and those that there are are really not very talented - Kassam and Jago Pearson seem their two 'shining lights' and are promoted absolutely everywhere possible. This follows, as Philip says above, the general Tory trend of promoting people with very little talent other than an ability to provide low-quality trolling at a moment's notice (that's also Gove's only talent).

Ages ago on Aarowatch I pointed out that the difference between Cameron and Blair was that Blair had talent himself, and was accompanied by a Labour generation with a fair few genuinely talented politicians within it (and talented people in other areas, eg the media). But Cameron is a pale imitation of Blair - media-friendly but without the instinct for the popular view, to whit his George Bush-esque response to the floods - and his acolytes both within and outside politics have very limited talents indeed, and mostly those talents consist of playing-to-the-gallery trolling. I'll never forget George Osborne's response to the bailing out of northern Rock - his immediate response was 'we're back to the 70s, everything's being nationalised'. He and Cameron are desperately short-term thinkers and Kassam and Pearson are their 'children'.