The hectoring rhetoric of last week continues at the Daily Mail, where the obsessive pursuit of three Labour politicians by the legendarily foul mouthed Paul Dacre continues unabated, despite there being very little interest anywhere else – including all broadcasters, not just the hated BBC. But, elsewhere, the wheels are coming off the Dacre wagon over its very credibility. 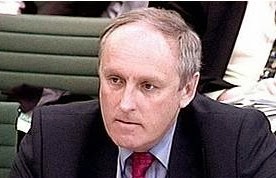 Today’s front page continues the effort of last week to force the decades-old story of the infiltration of the National Council for Civil Liberties (NCCL) by a group called the Paedophile Information Exchange (PIE). As Harriet Harman, her husband Jack Dromey, and Patricia Hewitt were all involved with the NCCL at the time, the Mail is running its attacks as a form of guilt by association.

“How Much Longer Can Paedophilia Apologists Stay Silent?” demands the headline, no doubt personally ordered by Dacre, who has the unshakeable belief that he can pull Labour off their opinion poll perch single handedly. The only added ingredient today is the claim “Even [the] Left demands answers”. So who is this Left? To no surprise at all, it consists of precisely no MPs. 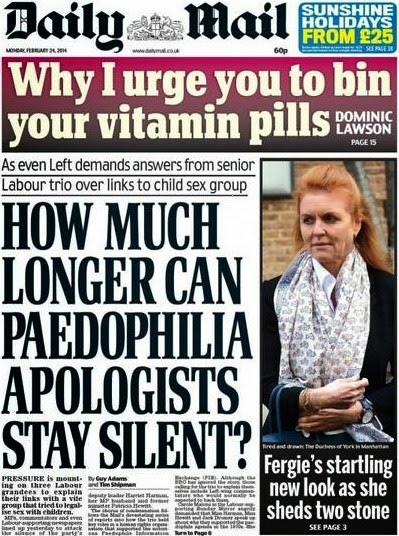 The claim also hinges on defining the Guardian and Observer as part of “the Left”, as this supposedly damning evidence is just opinion voiced by Barbara Ellen at the Observer and Roy Greenslade at the Guardian, plus Kevin Maguire and Carole Malone at the Mirror. These, together with I-Speak-Your-Weight Tory MPs Rob Wilson and Philip Davies, are held to constitute a “chorus”.

But while the Mail is continuing its characteristically righteous assault, attention elsewhere is homing in on a previous campaign, that to frighten the electorate into believing that hordes of Romanian and Bulgarian migrants would flood into the UK more or less straight after the New Year had been rung in. Most of what the Mail claimed at the time has since been shown to be totally untrue.

As Adam Bienkov has noted, six airlines and three coach operators were asked if they had any evidence of increased traffic to the UK from Bulgaria and Romania since last year. All replied that they had not (you can read Adam’s piece on politics.co.uk HERE). Worse, the Mail has now yielded to the inevitable and made a typical “A big boy did it and ran away” correction.

“An article on December 31 reported information provided by local travel agents ... We have since been made aware that some reasonably priced flights and seats on buses were available from Bucharest and Sofia at that time”. The Dacre doggies knew all along. They were told more or less immediately after publication. While Dacre tries his smear on the Labour three, bear his hacks’ dishonesty in mind.

Falsehood and misinformation is in the Daily Mail’s DNA. No change there, then.
Posted by Tim Fenton at 13:22

It's funny that R4 today programme put on Toby Young for his comments on the matter. Wasn't he known for "barging" around a bedroom with the likes of the infantiles @GuidoFawkes?

Strange choice for the BBC to make considering the subject matter although perhaps shows they don't take it that seriously.

The story featured strongly on the BBC news today where Harman was criticised for not handling the story correctly and for having a go at The Mail. This story will not go away. The timing is odd though, this would have made a great spoiler for when the GE kicks off.