Paedophile Smear Not A Good Idea

Today’s Daily Mail front page shows that the legendarily foul mouthed Paul Dacre has ordered another assault on senior Labour Party figures Harriet Harman, Jack Dromey, and Patricia Hewitt. This is reinforced with two articles, and once again, Daily Mail Comment, the authentic voice of the Vagina Monologue, weighs in. Thus an organised campaign to damage the party. 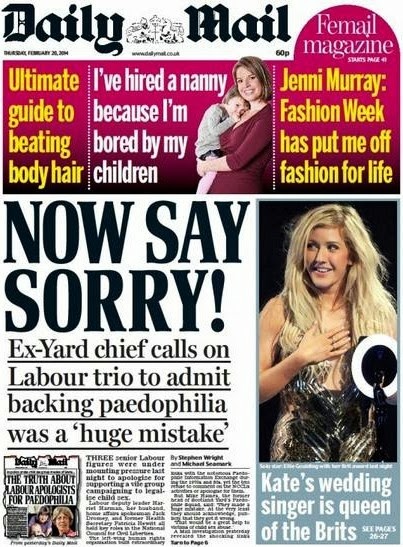 This may seem a perfectly sensible way for Dacre to exercise his prerogative of power without responsibility, but he is skating on perilously thin ice, especially when his obedient hackery is so willing the throw the name of Jimmy Savile into the mix. Savile was close to a number of politicians – but not Labour ones. He was a perennial favourite of Margaret Thatcher.

What does not seem to have occurred to Dacre is that playing the paedophile card, especially when considering the kinds of behaviour folks got up to in the 1970s and 80s, is likely to impact on politicians across the political spectrum. Moreover, as SubScribe has observed, it is strange to see a paper so opposed to recent prosecutions for historic child sex abuse apparently wanting more of them.

The case made against its targets by the Mail – SubScribe again – is that “Harriet Harman, her husband Jack Dromey and Patricia Hewitt had all worked for the National Council for Civil Liberties (now Liberty) in the 1970s at a time when the Paedophile Information Exchange was an affiliate organisation”. But, in Shami Chakrabarti’s words, it had “infiltrated” the NCCL.

Moreover, once the behaviour of the PIE became obvious, the NCCL threw it out. The Mail asserts that its targets “backed” PIE, but they have no evidence to back up the claim. Nor does it help their case to wheel out former DS Mike Hames, whose claim “Through their political correctness, the NCCL legitimised the Paedophile Information Exchange and its vile members” sounds like the Mail wrote it for him.

But let me put the Mail straight on the potential for this investigation to backfire: consider the case of Peter Morrison, who was Margaret Thatcher’s PPS at the time she was deposed as leader. Morrison had a liking for under-age males, and would regularly go cruising around Sussex Gardens. Nick Davies told “he had been picked up twice and never brought to trial”. One of those two is well-known.

Simon Hoggart revealed that Chester Labour Party was told “Peter Morrison would not be standing in 1992. He had been caught in the toilets at Crewe station with a 15-year-old boy. A deal was struck between Labour, the local Tories, the local press and the police that if he stood down at the next election the matter would go no further”. Morrison got off scot free. The bottle got him soon after.

How many more Morrisons are out there, Paul Dacre? Be careful what you wish for.
Posted by Tim Fenton at 12:33

This, believe it or not, is the paper that ran a headline just over a year ago about the womanly curves of a 14 year old girl.

HI
MIke Hames here
The Mail did not wheel me out as I can still walk! In addition, they did not write anything for me, the quote was mine. I am quite capable of rational thought and comment and am still busy in the Child Protection field. Best wishes
Mike