Not A Lot Of People Believe That

Those trying to pretend that the Environment Agency (EA), Met Office, BBC, and anyone else telling that this winter has seen record levels of rainfall across the south of the UK are wrong have a number of sources that they cling to. These provide reassurance, telling that it was actually worse in past years and so those dastardly propagandists are lying to them. 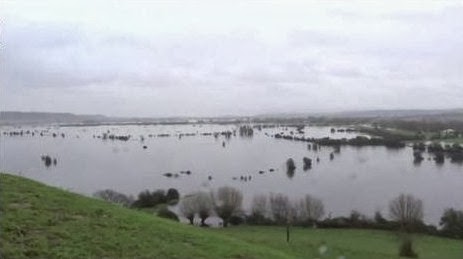 One such source, approved by serial fraud Christopher Booker no less, is a blog called Not A Lot Of People Know That, authored by one Paul Homewood. It appears to be modelled on Anthony Watts’ Watts Up With That, to which he contributes his wisdom. He is accordingly followed by those believing climate change is bunk.

But here a problem enters: Homewood’s insistence that the winter of 1929/30 was wetter than that almost passed has been dealt a possibly fatal blow, as the Met Office has declared 2013/4 “the UK’s wettest winter on record in the national series going back to 1910”. There were individual records for Wales, Southwest England and South Wales, and Southeast and central southern England.

Homewood has reacted rather as the likes of James “saviour of Western civilisation” Delingpole might react: he has suggested the Met Office has somehow rigged the data, and that his 1929/30 story was right all along. And, to prove it, he’s going to do some more research tomorrow. Because he cannot possibly be wrong. So who is Paul Homewood, and what qualifies him to make his pronouncements?

Well, he is as well qualified as Nigel Lawson, Booker and Del Boy: that is to say, he has no relevant qualifications. Full disclosure: neither do I, which is why I tend to accept what Paul Nurse called the “consensual position” on climate science (at the time when he proceeded to show up Delingpole for the fraud he undoubtedly is). Paul Homewood is a retired accountant.

Now colour me predictable, but of all the things I talk to my accountant about, climate science is not one of them. I have never felt the need to consult an accountant about the output of the Met Office, the analysis of Michael Mann, data from the NOAA and NASA, or indeed anything other than matters of direct financial relevance. All that feedback I must have been missing out on, eh?

Maybe I am too harsh on Homewood? Not a bit of it: he recycles a piece of manufactured copy from Breitbart London as if it were fact, gets movement of the Atlantic jet stream wrong so he can push the idea of “global cooling”, and churns over posts from Richard North’s frankly paranoid witterings at the EU Referendum blog. No, Paul Homewood is a fully paid-up member of the denialist fringe.

As such, he is just another part of the jerking circle telling each other that it isn’t happening. Meanwhile, the real world deals with real world problems.
Posted by Tim Fenton at 13:40

You have exactly summed up my own position on the subject of Paul Homewood,retired accountant,as well as why I also take the consensual view. I've used several accountants in the past and they're all good at manipulating figures to the clients advantage but climatologists and statisticians they are not. In fact,as you rightly point out, they are almost to a man amateurs when it comes to climatology.
They ask us to believe that the whole thing is a conspiracy as climatologists are all on the take and that deniers are as pure as the driven snow. What crap.