Many rail lines around Europe skirt expanses of water: those along the banks of the Rhine in Germany, by Lac Leman through Lausanne and Montreux, and along the water park that is the upper Douro Valley are all well-known. But these are not open, tidal seas. The Great Western main line beyond Exeter, which hugs the sea wall as it passes through Dawlish, shows what happens when you go there. 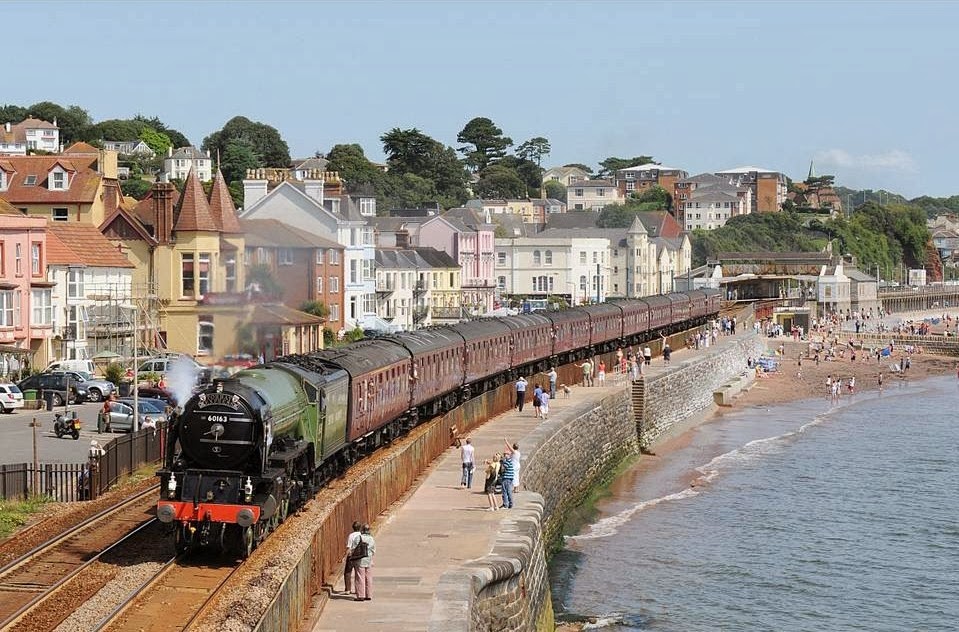 Idyllic: in Summer, and at low tide, new build steam loco Tornado leads a Torbay Express charter along the coast at Dawlish

And like other parts of the UK’s transport network, the potential for damage is only brought to public attention when that open, tidal sea does sufficient damage to wake up the media. They in turn ask why-oh-why someone is not doing something about a problem that has been there since the line opened in the 1840s. The answer is that, right now, there is no alternative route.

So when the area is hit by a succession of storms, the potential for the western part of Devon, and all of Cornwall, to be cut off from the rest of the rail network is very real. Normally, the waves only wash out the ballast on which the tracks rest. This is then replaced and disruption kept to a couple of days or so. The recent extreme weather has been far worse. So why do we depend on this line? 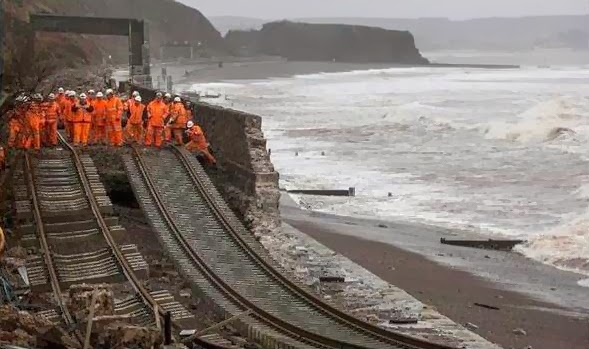 The answer is that choices were made many years ago which removed any alternative. There had been a line from Exeter to Newton Abbot which ran inland, avoiding the problems that affect the line via Dawlish. It was closed in the 1960s, paradoxically being affected by flooding. During the same decade, the only other alternative line was also closed and partially dismantled.

This had run from Exeter via Okehampton and Tavistock, ultimately approaching Plymouth from the west. The part from Bere Alston through Tavistock to Meldon Quarry (near Okehampton) has been partially built over. At the time, BR was losing considerable sums of money and any route seen as duplicating another was fair game for closure. That left the route which has now been severed. 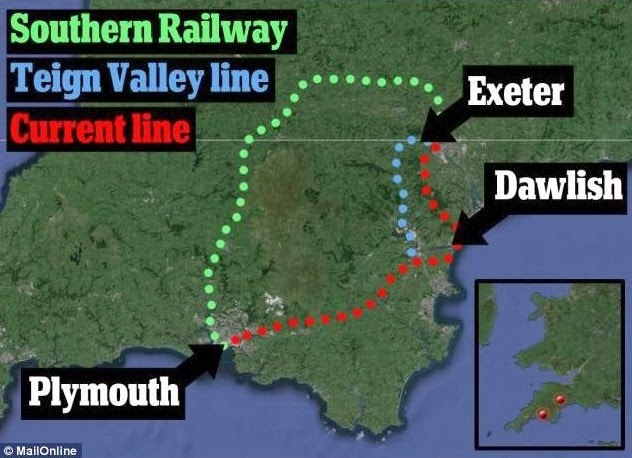 The alternatives that were closed long ago. "Just reopening" is not a trivial matter ((c) Mail Online)

As with many other decisions being forced on Government following the recent storms, it will be down to whether it is worth the candle: the cost of a new route avoiding the sea wall through Dawlish must be balanced with the potential benefit. There will be other schemes competing for attention. What will happen is that the can will be kicked a little further down the road.

The masonry wall, and the in-fill behind it, were clearly unable to cope with the force of the waves. Steel piling is the most likely solution: it looks unsightly, but can be faced with stone. Yes, the route through Dawlish will continue to carry rail traffic to the south west. That will emerge as the best value solution for the immediate future, along perhaps with slab track to stop the washing out of ballast.

It may not be the solution for all time: that’s for a future set of politicians to decide.
Posted by Tim Fenton at 10:48

1) In short term, get the line running again as soon as possible.

2) In the medium term, build a new line between Exeter and Newton Abbot that doesn't run along the coast. Ignore which route the old lines took - the new line needs to be whatever's best for today, which may or may not be the same as the Teign Valley line. (And keep the Dawlish line as a local/diversionary route.)

This opinion stands even if it costs hundreds of millions to build. Even if the best sea defences in the world can be built for Dawlish, we cannot go on having a main line that keeps having to be shut every time the waves get too high.

Besides, I have so sympathy with those people of Devon and Cornwall complaining about lack of rail investment. In the long term we should look at similar treatment for London-Plymouth as London-Swansea's already getting. A Dawlish bypass can be considered a first step to achieving that.

See the article here http://www.westernmorningnews.co.uk/ISSUE-8216-Fair-weather-railway-8217-routed-away/story-20566235-detail/story.html
- it is all Hitler's fault as WW2 stopped the Dawlish Avoiding Line scheme going ahead. In modern money the scheme would be about 1.5 Billion if it were still possible.

a very interesting link about the proposed deviation. But I don't think you can blame Hitler for what didn't happen after 1945. Reading between the lines I suspect the line was only promoted because of the threat of war and the importance of Plymouth as a naval base.