As representatives of one man who sought to have Piers Morgan ousted from CNN while he was still alive, the newly enriched rabble at Breitbart London was never going to hold back once the cancellation of his show was announced. Sadly, when the snark came, courtesy of James “saviour of Western civilisation” Delingpole, it served only to blow back and reveal the jealousy of its author. 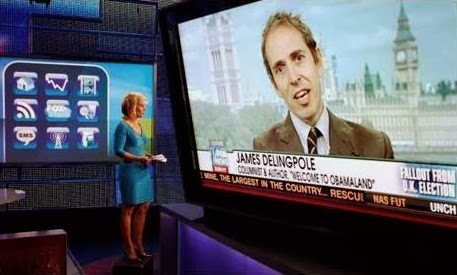 Not quite fair and balanced

It was blatantly derivative: Del Boy had to wait for Dan Hodges at Telegraph blogs to give him a pointer by earlier posting “Piers Morgan: the man you feel obliged to hate” (although Hodges’ take is, ultimately, diametrically different to Delingpole’s). Del’s post also recycles the same photo of Morgan that I had used earlier. The pressure to keep nose to grindstone isn’t doing wonders for originality.

It was flagrantly dishonest: Del tells that “investigations by Guido Fawkes found numerous incidents in which the Mirror, under Morgan's editorship, had illegally hacked and blagged private data ‘on an industrial scale’”. The Fawkes rabble huffed and puffed, but found no incidents at all. That was why their claim to be taking a dossier to the Metropolitan Police was such a laugh.

And, on top of all that, Delingpole demonstrates delusions of an adequacy he is most unlikely to ever possess: “Thanks to Morgan, it is now entirely possible that the careers of every single Brit hoping to make it big in the US will have been killed stone dead”. And who did you have in mind? Not one James Delingpole, perchance? But Del, you’re never going to make it big anywhere.

No, what really sticks in the Delingpole craw is that while he has had to move out of London because he’s skint – and has, by his own choice, saddled himself with two sets of school fees for his children – Piers Morgan has turned his fortunes around after his humiliating sacking from the editor’s chair at the Daily Mirror to garner several million of whatever your preferred currency unit happens to be.

Yes, this blog takes the piss out of Piers, and like anyone in the public eye he knows to expect this. I suspect he rather likes it, too. But while Morgan can point to a contacts book that includes heads of state, Hollywood A-listers, and the people who can enable him to secure More And Bigger Paycheques For Himself Personally Now, Del Boy is reduced to scrabbling about among the right-wing nutjobs.

Just who is “thick as pigshit” now, eh Del? What a sad little loser he is.
Posted by Tim Fenton at 10:44

"“Thanks to Morgan, it is now entirely possible that the careers of every single Brit hoping to make it big in the US will have been killed stone dead”."

Delingpole is an interesting character. We shall have to look into his background soon, but from what little we know it is clear that he is a perfect fit for the Breitbart brand. They are all a bunch of ankle-biters.