Wednesday evening brought scenes of confusion as Crewe station was evacuated at the height of the storm, after part of the roof was blown off. That this happened was no surprise: the increasingly dilapidated canopies have sprung that trick before. What might be news is that that it would not have happened if Network Rail (NR) had completed the work they started in 2007, only to leave it unfinished. Most of the platforms were sheltered under ageing roof and canopy structures built, at a guess, before World War 1. Here, the roof over Platform 12 can be seen in late 2006, just before removal. Now look at the next image, taken three years later, and in the background can be seen new canopies, with no overall roof. This work should have continued with the rest of the station. 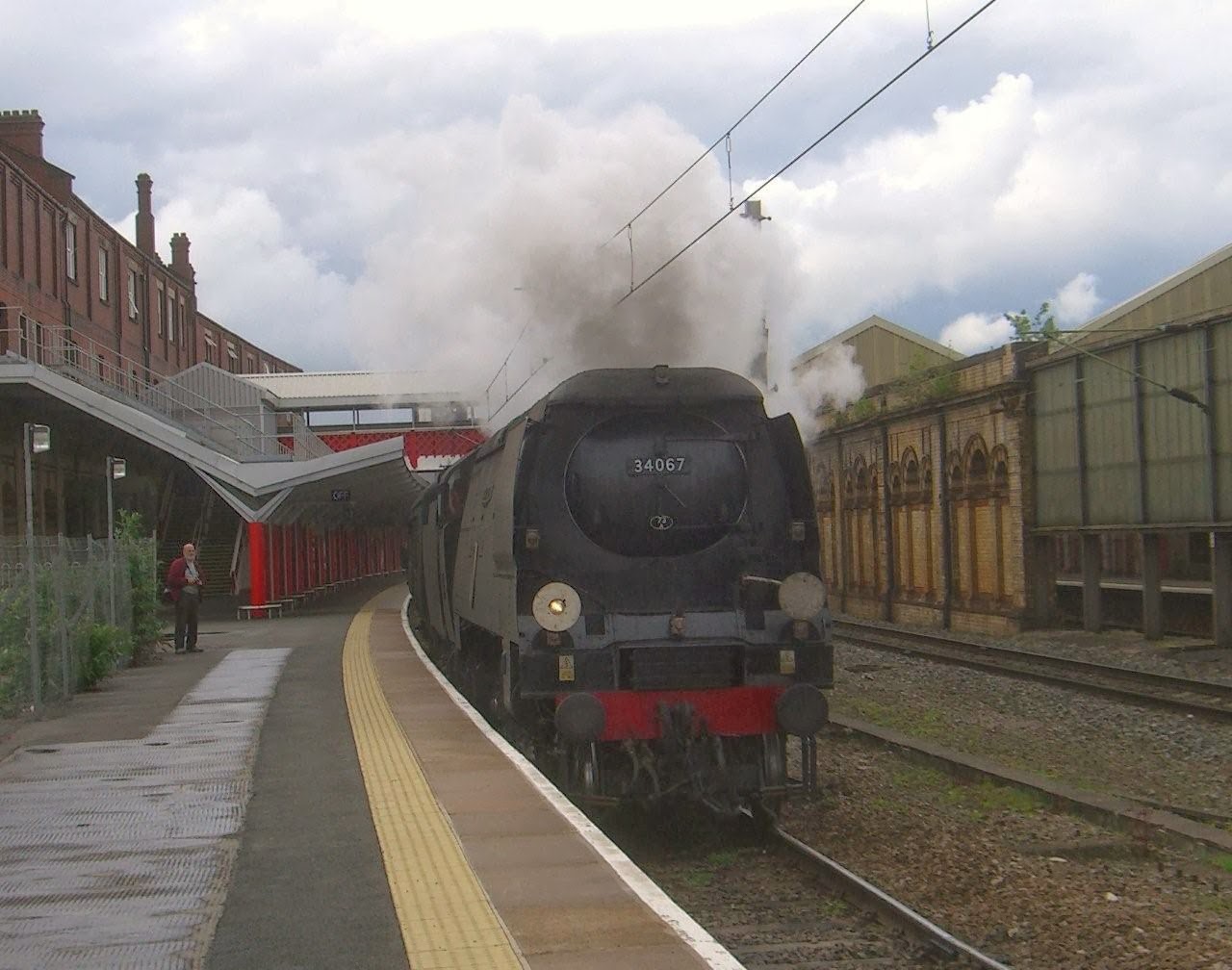 2009: behind a departing Tangmere, the overall roof is gone, replaced with new canopies

But then NR had their daft idea of moving the station two miles south to Basford, and so the work stopped. Some refurbishment was performed on parts of the structures covering Platforms 5 and 6 – the busiest part of the station. But, as can be seen in the next photo, those roofs and canopies cover a very large area. And parts of them are close to the overhead wires. 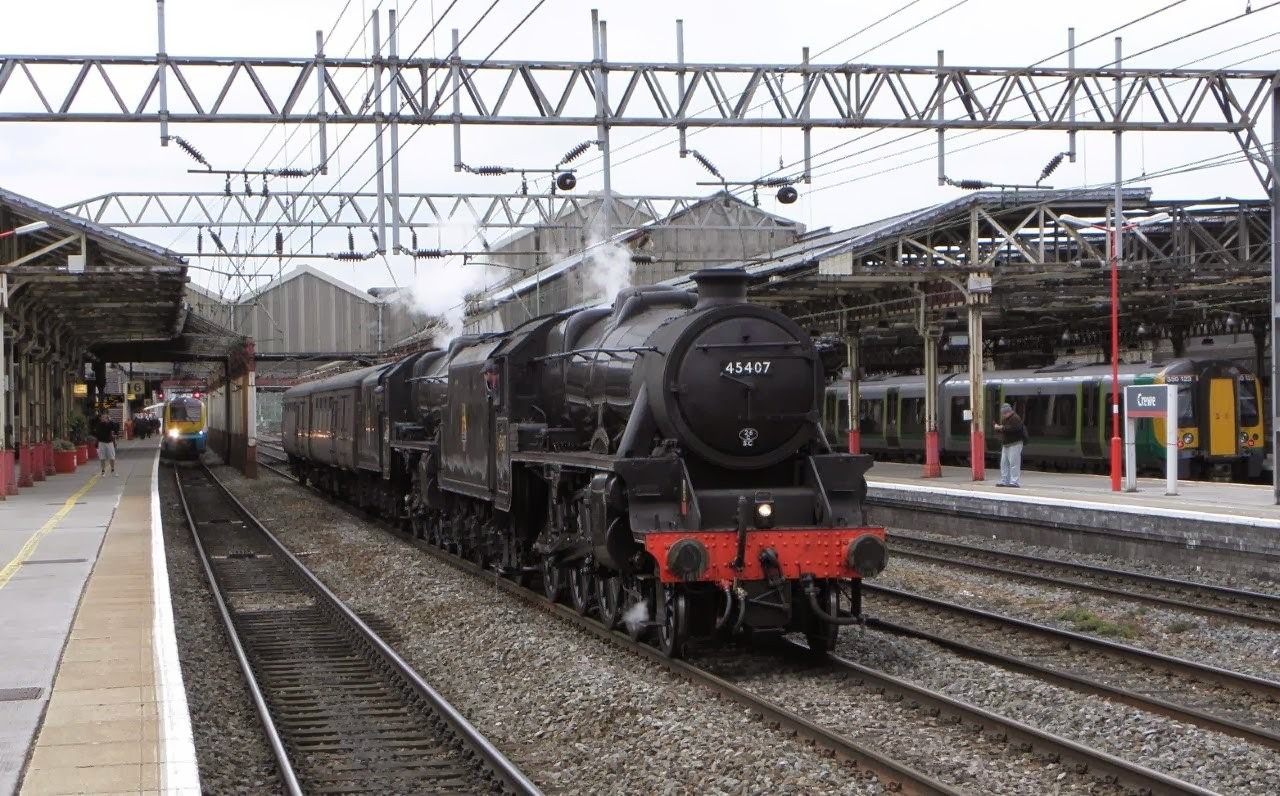 2011: look at the extent of the old roof and canopy structures that remain

This is not a problem as long as they don’t get any closer. But bits of stray panel getting tangled up with cabling that carries 25,000 volts of Alternating Current is not a desirable state. And there are plenty of plastic and metal panels in those tired old roof structures. So when the wind ramped up on Wednesday, push came to shove and soon there were bits of roof flying everywhere. After the storm: a little damage ...

Starting gently with the smaller panels, here’s a gap in the roof over the south end of Platform 5. The missing panel would not have had to fly very far to get fouled up in the wires (there’s another missing one to the right). Some of the dislodged stuff was rather more substantial: below is a gaping hole in the canopies over the south end of Platform 6. And, as the man said, there’s more. 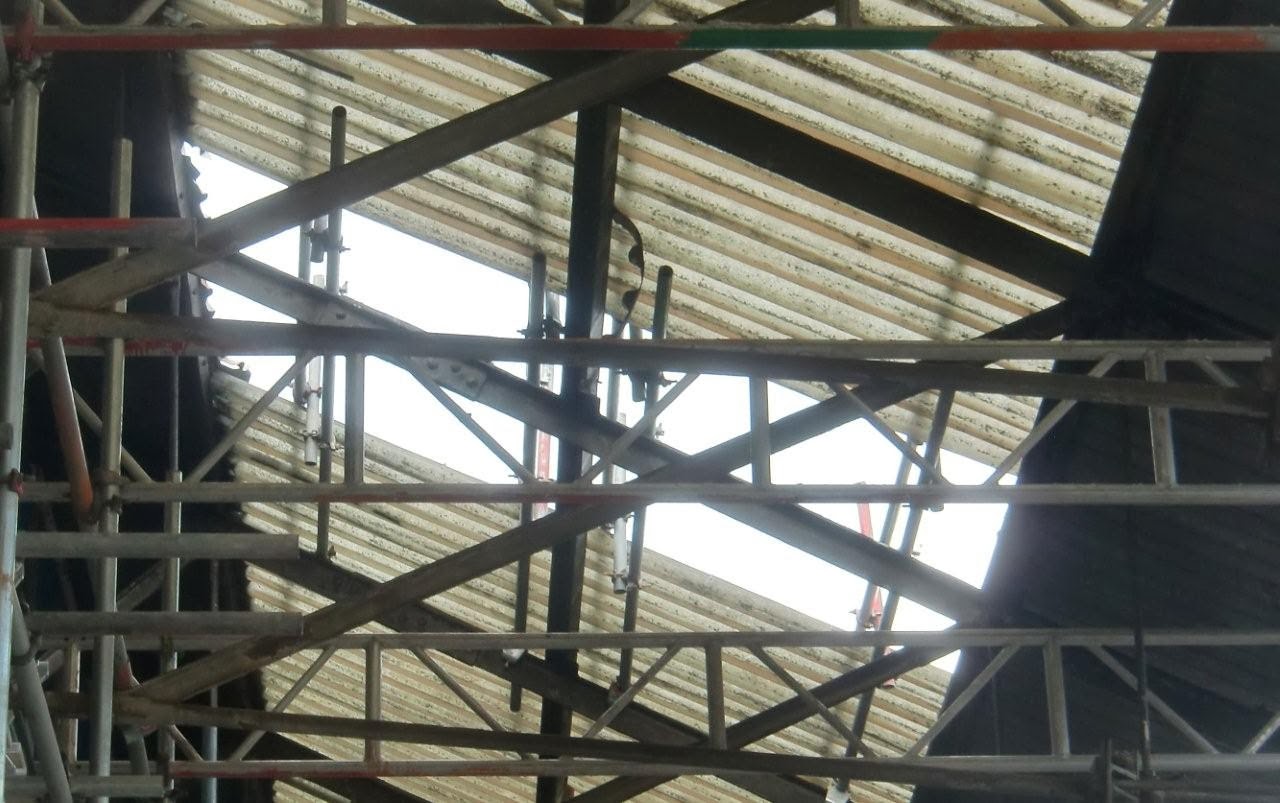 Below is what happened to the highest part of the overall roof: several metal panels ripped from their mounts and deposited, well, who knows where. Exactly what happened when they fell to earth I don’t know, and would rather not think about. Reports of fire were probably a flashover – potentially very dangerous. The subsequent closure and evacuation of the station was the only course of action. Meanwhile, the new canopies over Platform 12 remained unaffected by the storm. Why NR have not extended this change to the rest of the station, preferring instead to refurbish and bodge what is already very old and tired, is a mystery. The consequence, on the other hand, is not at all mysterious: it means damage, danger and disruption. All because of a change of mind.

Decisions have consequences years into the future. Penny pinching doesn’t work.
Posted by Tim Fenton at 13:01

Very true but you missed one bit. The work of 2007 was only done when part collapsed in a storm (18th January by my reckoning, tail end of Hurricane Kyrill). Just like this week it lead to evacuation, total closure and hundreds of people jammed into the ballroom at the Crewe Arms Hotel. They had to put on a show of repairing it but after patching up bits of it and having new boy MP Edward Timpson to pose for a photo they promptly packed and left. Since then they've turned up and done odd bits now and then, probably when they've found a few quid left in budgets at year end but no-one at Network Rail really cares. Too busy with really important jobs like their shiny new HQ in Milton Keynes. And of course, one of the several cliques that runs the company has the big idea of the South Cheshire Parkway station and is actively undermining Crewe.

Good point SteveB.
I coomented on a previous post about Crewe station that a refurbishment means a tin of gloss paint.
For a major interchange station Crewe is in a Very Bad State.
A major rebulid (in the same spot) is needed, but Virgin Trains (short time left on franchise) Edward Timpson (private investment) and Network Rail (Milton Keynes) aren't interested.