Leo McKinstry – Back Under Your Rock

Just as all hands have been mustered to help those affected by the flooding in the Somerset Levels and Thames Valley, all available pundits have been summoned by the obedient hackery of the legendarily foul mouthed Paul Dacre to provide the requisite barrage of why-oh-why background noise. This has necessitated a recall for appalling has-beens such as Leo McKinstry. 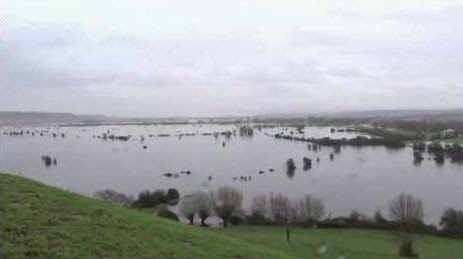 His chosen subject is “Awash with cash, fanatically PC. The infuriating truth about the useless floods quango”: the target is the Environment Agency (EA), which is accused of providing company cars to around half its workforce. It may not occur to the desk-bound that some organisations need their staff to be mobile and cover large areas of the country in the course of their jobs.

Sadly, McKinstry drops the ball at the start: “For centuries, it was common knowledge that land below sea level — like the farms and villages in the Somerset Levels — had to be managed through networks of drains, pumping stations and ditches, all of them regularly cleaned and maintained” he tells. But the Levels are not below sea level – were that true, they’d never drain into, er, the sea. Research fail.

It gets worse: he then falls into the trap of recycling the myths peddled by the serial fraud Christopher Booker in last Sunday’s Telegraph, that somehow the flooding of the Levels had been ordered by the dastardly EU (Booker, in turn, was churning over the paranoid and highly selective interpretation of EU directives by his pal Richard North). Again, McKinstry does not bother checking first.

“An EU conference in Warsaw in 2003 warned that ‘there may be substantial benefits if some flood plain land is returned to its previous, unprotected, undrained condition’. It was this attitude that led to a series of EU directives in support of abandoning traditional flood defences”. There were no such directives. But the south of England has seen record amounts of rainfall.

“The refusal to dredge watercourses was, therefore, not a matter of neglect, but of deliberate policy” he blusters, recycling the Booker myth that came before the EU one. As has also been shown, dredging is not going to stop the Levels flooding. It’s instructive that nobody is suggesting any of these causes and remedies for the Thames valley – which has also been affected by that record rainfall.

McKinstry rounds off his rant with a slice of good old-fashioned bigotry: “The obsession with diversity – such a feature of today’s public sector – also runs through the organisation”. Yes, the EA employs women! It employs LGBT people! And, horror of horrors, it employs Muslims! And if they are the best people for the job, well, fair play to them. This is a truly desperate slice of bad punditry.

Notably more people, even Tories, are starting to feel safe talking about climate change suddenly. I can't wait to hear the lonely, desperate ravings of the last rump of deniers. Where's Delingpole when we need a laugh?

The EU/environmental conspiracy to flood Somerset and turn it into a Communist nature reserve is no different from the 9/11 truthers, except the former seems to be a belief of many in the press and even government.

What the NFU and its allies don't tell you, is that some farmers were getting paid to flood their land, small parts of it of course not the large area now under water (there was a Private Eye story last spring about it), so if there was a policy it was already accepted. And if dredging is to go ahead then it isn't just the two rivers in the news but the whole network of drainage ditches (or rhynes as we call them on the levels), which are mainly the responsibility of the landowners, ie NFU members.

BTW while you are right about "the Levels are not below sea level", there is a problem at high tides when the sea level can be higher than the flood plains. Add the recent high tides to record amounts of rain and you get the current floods.