I’ve previously examined the complaint made by Jonathan Portes of NIESR following a routinely dishonest hatchet job by Dan, Dan The Oratory Man, using the platform given him at the bear pit that is Telegraph blogs. Following a published apology, both Hannan and his editor Damian Thompson, clueless pundit of no fixed hair appointment, have asserted that the complaint was in fact dismissed. 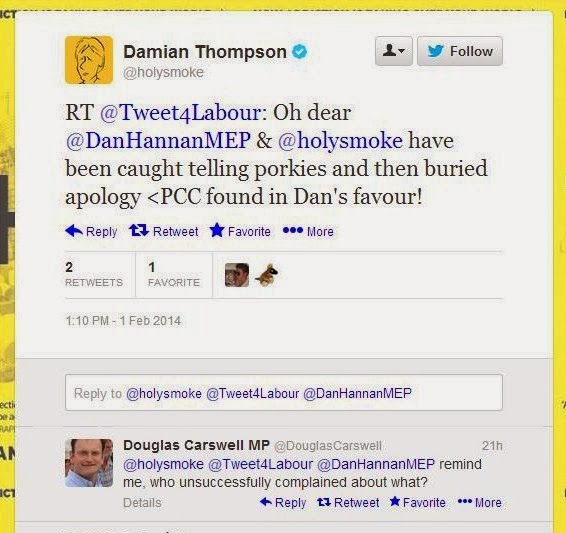 Sadly for these two less than august beings, in pursuit of further investigation, the full text of the PCC conclusions has passed before my inspection. And the only verdict that can be reached is that both Hannan – who, remember, is an MEP – and Thompson are being highly economical with the actualité. So, while they look for the nearest fire extinguisher, let’s look at what the PCC actually said. 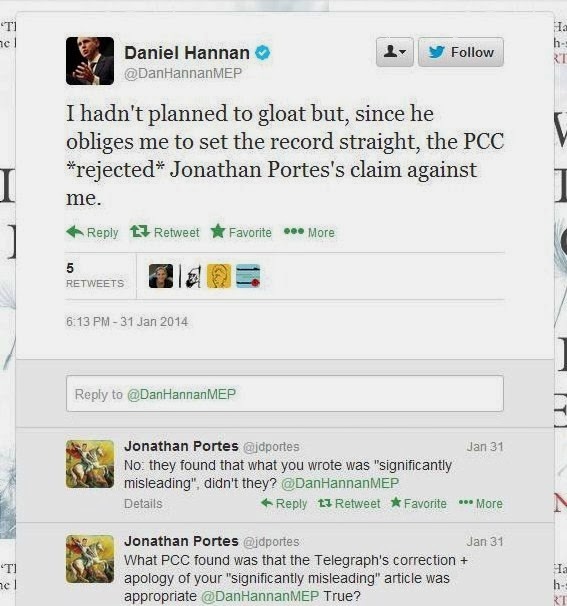 That's not quite true, is it, Dan?

It is important to note that the PCC considered Portes’ complaint as two separate matters: the assertion that EU funding was only given to bodies which were supportive, and that which held Portes was pro-EU personally. There were therefore two sets of conclusions. Let’s look at the NIESR bias claim first. 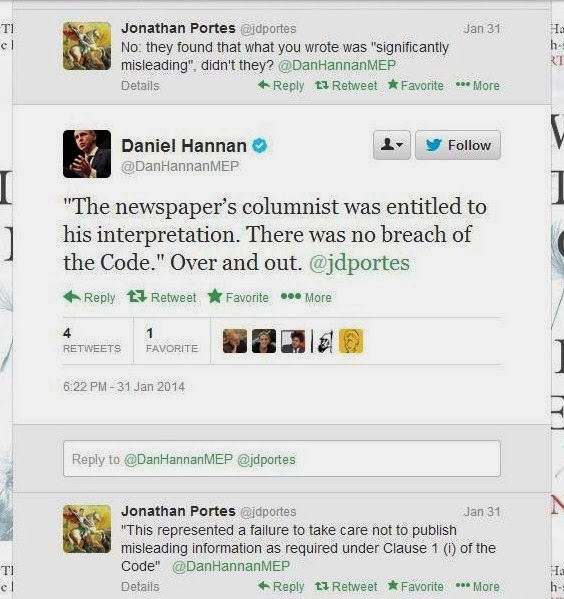 The PCC observed that “The columnist [Hannan] later stated, however, that NIESR’s funding was linked to a pro-EU stance and his failure to note the official position - that research funding was provided on the basis of competitive tender - clearly had the potential to significantly mislead readers. Even with the complainant’s denial, the article suggested that EU funding was awarded on a political basis as a matter of course. This represented a failure to take care not to publish misleading information as required under the terms of Clause 1 (i) of the Code”.

The text of the PCC's conclusions

If Hannan or Thompson can show how this “rejects” Portes’ complaint, or finds in their favour, perhaps they will let me know. They will not. Hannan was caught lying – once again – and even the PCC wouldn’t let him get away with it. So, guided by the light from their burning trousers, let’s look at the second item.

“The newspaper provided an article from Total Politics, in which he stated that a British exit would have a ‘problematic’ impact on the investment and financial sector of the economy. The complainant said that this reference to the economic consequences of an EU exist did not constitute support for EU membership. The article included the complainant’s position, and the newspaper’s columnist was entitled to his interpretation. There was no breach of the Code”.

This is the exoneration on which Thompson and Hannan are hanging their hats. So let me put them straight. The most vehemently anti-EU voice could quite legitimately claim that a UK exit from the EU might be “problematic”. To conclude as the Tel has been allowed to conclude shows not merely that the paper is being allowed its own opinions, but, as in the Delingpole and UEA case, its own facts. That’s not good enough, but thanks are due to Dan and Dames for bringing attention to it.
Posted by Tim Fenton at 11:39