The legendarily foul mouthed Paul Dacre may not edit the Mail On Sunday, but he is editor-in-chief of parent company Associated Newspapers, and so it is no surprise to see the gratuitous kicking of anything to do with the Labour Party carried over from the weekday title today. What is extraordinary is that there is very little on which to hang what is yet another slice of knocking copy. 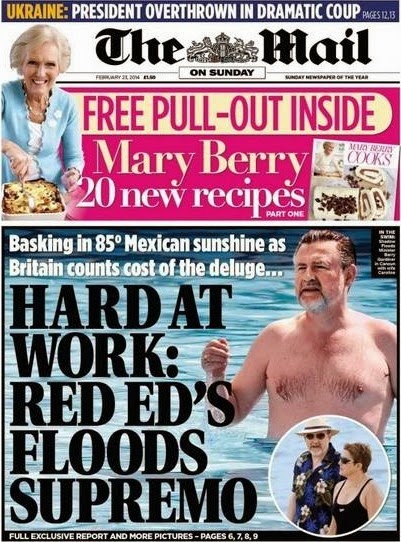 “Hard At Work: Red Ed’s Floods Supremo” thunders the front page headline, backed up by a full four pages inside. And interesting to see that Mil The Younger is still being called “Red”, as if this will transform him into the reincarnation of Josef Stalin or Mao Zedong. So shadow rural affairs minister Barry Gardiner has taken time out to have a break and address a conference during the recess. Er, so what?

“The senior MP in charge of Labour’s response to the floods crisis spent last week on an all-expenses-paid junket to a luxury resort in sun-kissed Mexico. As Britain struggled to recover from the devastating deluge, Shadow Floods Minister Barry Gardiner – who is also Ed Miliband’s ‘special envoy on climate change’ – jetted off to Cancun with his wife” we are told. Yes, and so what?

“A Mail on Sunday investigation has established that since he was elected in 1997, the MP has spent an astonishing 157 days on all-expenses-paid foreign trips to exotic places in six continents, at a cost of well over £100,000”. And again, so what? Did the taxpayer pick up the tab? No. Is this practice restricted to the Labour Party? No. Did he take time off when Parliament was sitting? No.

“While politicians on all sides last week visited flood-hit towns and villages and discussed how to stop it happening again, 56-year-old Mr Gardiner left it all behind, flying 5,000 miles to the stretch of Mexico’s Caribbean coastknown as ‘the Mayan Riviera’”. What new contribution could now be made to the flooding problem? The Environment Agency, local authorities and the armed forces are on the case.

How will a junior shadow minister being in one place rather than another improve matters? Even the MoS admits “Mr Gardiner is not breaking any Commons rules by taking the freebie”. Labour is not in power. The floods, although still blighting hundreds of properties, are now in the clean-up phase, with lessons to be learned for all concerned in the months ahead. That does not need Gardiner to be here now.

“Normal men and women rightly believe that lawmakers should live as much as possible as their constituents do, facing the same problems, sharing the inconveniences and frustrations of normal life” pontificates Mail On Sunday Comment. And the last time I looked, many of those ‘normal men and women’ do indeed holiday in places like Cancun.

Still, the MoS story fulfils the Labour bashing agenda, so that’s all right, then.
Posted by Tim Fenton at 14:40

'As much as their constituents do'?

Perhaps the normal men and women would also appreciate journalists living among them, instead of sunning themselves on very beach, Florida for most of the year while all the time maintaining the fiction that they live in North London.

Hmm. Perhaps “Normal men and women rightly believe that journalists and editors should live as much as possible as their constituents do, facing the same problems, sharing the inconveniences and frustrations of normal life".
How are things on the grouse moor and at the castle, Paul?

“Normal men and women rightly believe that lawmakers should live as much as possible as their constituents do, facing the same problems, sharing the inconveniences and frustrations of normal life”

They can't all go riding on knackered police horses, and attend country suppers, with (ex) editors of national newspapers like normal people can they?

Next they'll be asking Ian Duncan Smith to timeshare a cardboard box on £50 a week?