But Still They Won’t Say Sorry!

That is today’s Daily Mail headline: once again, the legendarily foul mouthed Paul Dacre is trying to equate the Labour Party with encouragement for paedophilia. But, as a new petition at change.org started by Owen Jones suggests through its title, “Stop the Daily Mail sexualising children”, encouragement of paedophiles did not end in the early 1980s: it is happening now. And the perpetrators still won’t say sorry! This may be because that encouragement has been spearheaded by Mail Online, with needlessly intrusive photos of little children backed up by the creepiest of copy and captions. This behaviour is not limited to isolated occurrences. Paris Jackson (13 at the time), Nicole Kidman’s 16-month-old daughter, Jennifer Lopez’ two year old twins, Halle Berry’s two year old daughter, Brad Pitt’s two year old twins, and Miranda Kerr’s five month old son were all “growing up fast”. 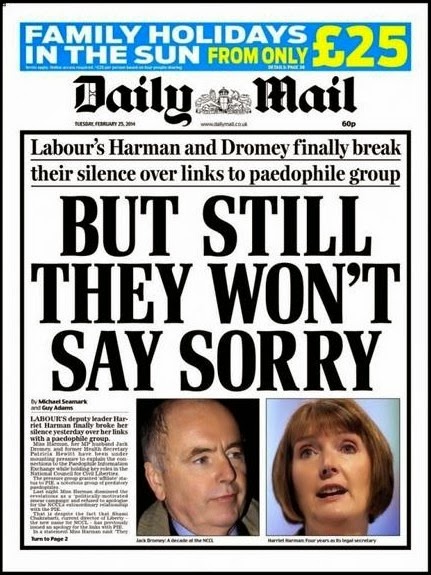 Newspaper editors in glass houses, and all that

On top of all that, Harriet Harman, one of Dacre’s targets in his latest attempt to damage the political party he loathes, has discovered a Mail story featuring a 12 year old girl in a bikini – but she was a sleb, so that makes it all right in the perverse world of the Vagina Monologue.

Meanwhile, the Mail has failed to say sorry for its constantly “giving succour” to paedophiles. Paul Dacre is the lowest form of hypocrite.
Posted by Tim Fenton at 13:18

Dacre was ably supported by the BBC's aggressive and Mail-focused questioning of Harman on the mid-day news, and their tacit acceptance of the Mail articles by allowing airspace to Andrew Pierce.