One of the seminal moments in the history of the BBC’s Question Time was the first appearance of (then) Labour Councillor David Blunkett. How, many wondered, would a blind man manage with the programme’s format? Would then chairman Robin Day have to make special allowances for him? How could he establish a rapport with the audience, as well as put his case for a left-leaning politics at the height of the Thatcher era? 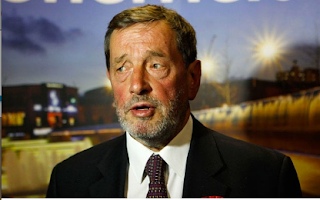 In the event, no-one need have been concerned: for Blunkett, the appearance was a triumph. His masterful revelation of just how badly NHS staff were paid, by taking out two nurses’ pay slips and laying them out on the panellists’ table, silenced any Conservative comeback and enthused the audience. Thus the legend of a peoples’ champion overcoming his own particular battle with adversity was forged.

The Blunkett legend was not severely dented even after two resignations from the Blair cabinet. He had, after all, been a diligent and long-serving MP, his elevation to the Lords after standing down from the Sheffield Brightside and Hillsborough seat in 2015 agreed to be fair recompense for a lifetime of public service. He had been an inspiration to so many. But now we know that he long ago sold out in order to enrich himself further.

As Private Eye magazine has revealed today, “in November 2005, Blunkett was driven to Wapping. Rupert Murdoch and Rebekah Wade (as she then was) gave him a drink and offered £150,000 a year to put his name to a ghost-written weekly column for the Sun. Blunkett accepted instantly, noting in his diary that ‘you don’t refuse Rupert twice’”. He accumulated at least £350,000 in the three following years.

Worse, Blunkett kept schtum over phone-hacking, despite being one of the most high-profile targets of the late and not at all lamented Screws. He proceeded to not only secure a £300,000 settlement over the hacking, then managed to blame not the Screws, but the Observer instead, because the latter paper had revealed the deal. Blunkett accused the Obs of “intrusion”. Yes, after the Screws had hacked his phone.

Small wonder that Blunkett now does not want Part 2 of the Leveson Inquiry to go ahead, which may not be unrelated to its terms of reference: “to inquire into the extent of corporate governance and management failures at News International and other newspaper organisations, and the role, if any, of politicians, public servants and others in relation to any failure to investigate wrongdoing at News International”.

As the Eye points out, one politician who would be “caught” by that definition would be Blunkett, who has dutifully wheeled out the standard press establishment response on Leveson 2, claiming “Despite the length and cost of the first Leveson Inquiry, there are now calls for Leveson Two to examine yet again the past misconduct of the press”. But Leveson 2 would not revisit Leveson 1. And there is more. 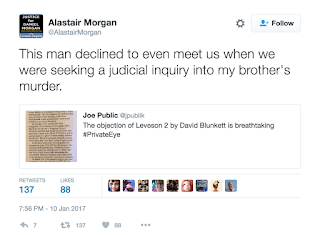 The Liverpool Echo reported last June that “Former MP Lord David Blunkett said Liverpool fans ‘got off lightly’ in a 1990 meeting with Hillsborough report author Lord Justice Taylor … Documents released by the Hillsborough Independent Panel (HIP) also reveal the politician requested an ‘off the record’ meeting with Lord Justice Taylor, who led an inquiry into the disaster, to talk about ‘the contribution which crowd disorder made’”.

The impression of ambivalence over the events that resulted in 96 deaths, and hundreds of injuries, is inescapable. And it gets worse: Alastair Morgan, who is campaigning to secure justice for his brother Daniel, murdered in a south London car park almost 30 years ago, and a matter in which the Murdoch press has interfered significantly in the past, revealed that Blunkett had been appallingly uncooperative when Home Secretary. 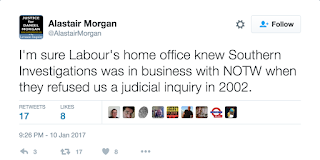 He Tweeted yesterday “This man declined to even meet us when we were seeking a judicial inquiry into my brother's murder” and later added “I'm sure Labour's home office knew Southern Investigations was in business with NOTW when they refused us a judicial inquiry in 2002”. Blunkett had effectively done the bidding of the Murdoch mafiosi.

Like the central character in Howard Spring’s novel Fame Is The Spur, David Blunkett started his career as a champion of the less fortunate, willing to stand up for those poorly-paid NHS staff and other public servants. But as the years progressed, he slowly but surely was absorbed by the establishment, choosing conformity and comfort, and ultimately sold out, and was sold, to Rupert Murdoch.

The Morgan family were rebuffed, the Hillsborough victims left to the efforts of those politicians who came after him. But the money was good. Thus the career trajectory of another who has gained the world, but along the way lost his soul.
Posted by Tim Fenton at 10:41

David Blunkett started his career as a champion of the less fortunate, willing to stand up for those poorly-paid NHS staff and other public servants. But as the years progressed, he slowly but surely was absorbed by the establishment, choosing conformity and comfort, and ultimately sold out, and was sold, to Rupert Murdoch.

In the words of historian A.J.P. Taylor, "There is nothing more agreeable in life than to make peace with the Establishment - and nothing more corrupting." Blunkett is living proof of the wisdom of those words.

Alas, a standard story in the ranks of New Labour. Which is why I use the pejorative "Quisling" when I mention them.

Apropos Blunkett's term as Home Secretary......small wonder the Hillsborough cover-up continued during his tenure. The same applies to disgusting Jack Straw. Both of these men, typical of their political faction, are anathema to democracy. Both of them will carry their guilt to their graves. The same goes for the rest of the New Labour gang: They perverted everything worthwhile in the Labour Party.

And don't for a moment think their demise has rid us of that kind of appalling betrayal. Take special note of Benn, Starmer and Umuna - each of them has treachery written all over them. There are many others shuffling for a different position since rank and file membership has made it clear the fight is on to clear the party of corruption and betrayal.

Blunkett is just one example of the type. Money will never be able to scrub them clean. Their names will be notorious for ever.

The usual suspects Media print shite regarding Hillsborough then media have to manipulate politicians to make their version of events non libellous and believable.

And it still continues to this day.

Look at the recent article on Leveson 2 written (or maybe not) by a politician trying to divert any suggestion of Leveson 2.
It was featured here on Zelo.

I forget the ladies name.


Why are politicians so easily persuaded? Money or blackmail is my guess.