Sun Editor Slags Off His Own Fans

Meet Emily Dinsmore. She’s a former undergraduate physicist, who was latterly an admin person at the East London Science School and shares a surname with a former editor of the Super Soaraway Currant Bun who is still very much employed by the Murdoch empire. And whether or not this is a coincidence, Ms Dinsmore is firmly of the belief that the Murdoch mafiosi should be allowed to carry on sticking two fingers up at the little people and smearing and defaming who they like. 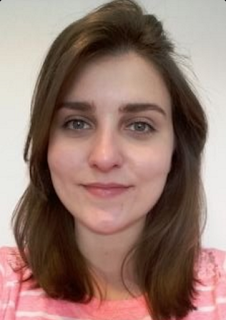 So she has also wholeheartedly backed the #FreeThePress campaign, which is supported by many in the Fourth Estate, and which chimes with her other role, that of occasional contributor to online magazine Spiked. That this was founded by the likes of genocide denier Mick Hume clearly does not pose a problem for her (the East London Science School has significant links to the Spiked crowd). 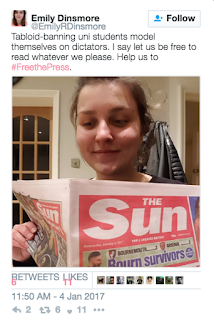 Nor does she have any problem in adopting tried and trusted tabloid smears, such as the old canard which equates a decision not to have certain papers on campus, which has been arrived at after following due process and allowing the democratic process to take its course, as the work of totalitarians: “Tabloid-banning uni students model themselves on dictators. I say let us be free to read whatever we please. Help us to #FreethePress”. 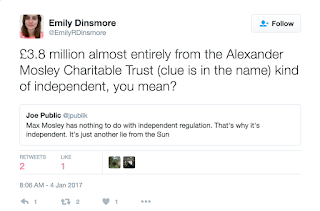 Will the spirit of the Third Reich, Benito Mussolini, the Greek Colonels, Francisco Franco or Antonio de Oliveira Salazar be fetching up at a London University any time soon? Well, no it won’t. But Ms Dinsmore is free to argue her corner, and long may she continue to do so. She’s also free to suggest - wrongly - that press regulator IMPRESS is not independent, asserting “£3.8 million almost entirely from the Alexander Mosley Charitable Trust (clue is in the name) kind of independent, you mean?”.

Clue is in the way that the Alexander Mosley Charitable Trust cannot exert any kind of influence on IMPRESS, so yes, that kind of independent. But there is no faulting Ms Dinsmore’s enthusiasm, as she noted “Press freedom so important @MetroUK published its first ever op piece about it today. 1 week left to #FreeThePress”.

This enthusiasm has even come to the attention of the Sun’s deeply unpleasant editor Tony Gallagher, who has Re-Tweeted her assertion “'We should absolutely be standing up for press freedom.' Students, reject campus tabloid bans and join the #FreeThePress campaign”. Ms Dinsmore might have thought she was doing rather well to secure Gallagher’s acknowledgement, given he’s such a busy gastronome, er, sorry, newspaper editor. Until he gratuitously slagged off the education sector, especially that student campus part to which Ms Dinsmore was speaking. 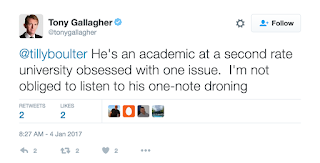 After Tilly McAuliffe noted that Tone had either blocked or muted Steven Barnett - of the University of Westminster, a Proper London University - The Great Man sneered “He's an academic at a second rate university obsessed with one issue.  I'm not obliged to listen to his one-note droning”.

So, Emily Dinsmore, just remember your place. The editor of the Sun might have bestowed an RT upon one of your efforts, but he has no problem calling proper London Universities "second rate". There's your appeal to students on University campuses well and truly sorted. Endorsing a campaign by slagging off the potential participants? It could only be the Murdoch mafiosi.
Posted by Tim Fenton at 10:20

Doubtless ms. Dinsmore will also campaign for a break up of the Murdoch monopoly, plus join the resistance to his expansion of media ownership. All of it of course in support of a so-called "free press."

Tone muted me today after I called him a snowflake for muting Steven Barnett. Naturally the great man had to send me an unpleasant tweet telling me so. I'm of course honoured he should take time out of his busy day to even read my tweets let alone mute me, but as I don't follow him, hardly ever tweet to him unless it's to retweet this blog and I don't buy the Sun, disgusting rag, my life will carry on as normal.

As for #FreeThePress, just plain dishonesty about Leveson and Section 40 as we'd expect from those promoting it.

If you want to keep your blood pressure low don't listen to yesterday's R4 Media Show.

I turned on after about 10 minutes and am still wondering how much Blunkett is trousering for his continued support of the 'free press'.

As Students now pay to attend uni and come out the other side owing 30k or so for the privilege , I'd say they had the right to invite or ban whoever they like to their university, they are paying for it.

Side effect of tuning students into customers I'd say.

Look you miserable cretins, if Ms Dinsmore or anyone else wants to read The Bun or any other shitty tabloid rag at the Queen Mary University, what business does the Student Union have banning those newspapers from the campus? You miserable, totalitarian killjoy cunts.