The Tories are presently more trusted on management of the NHS than Labour, a poll finding which should concern the latter party rather more than the former, considering The Blue Team’s ability to tell the most blatant whoppers about NHS problems, and practice the most egregious blame-anyone-and-everyone-else approach to criticism. There is also the sly briefing by Theresa May designed to dump on GPs. 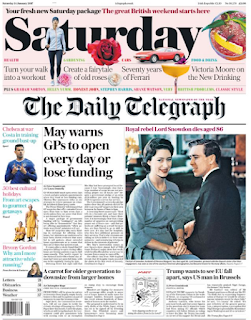 That it was all over the Saturday right-leaning papers was not an accident. “May warns GPs to open every day or lose funding” was the Telegraph’s effort, while the Times simply thundered “May demands 7-day GPs”, and the Mail claimed credit for the whole thing with “After Mail exposes half-day surgeries, doctors told to open from 8am-8pm - or lose cash … OPEN ALL HOURS, PM ORDERS GPs”. And there was more.

The Mail had done a softening-up hit job on GPs earlier in the week, with a Daily Mail Comment - the authentic voice of the Vagina Monologue - declaring “Patients betrayed by their part-time GPs” and making sure readers knew it was not Theresa May’s fault: “the service is in the grip of an organisational crisis, with resources squandered and working practices tailored to suit staff, not patients … At its root lie Labour’s botched contracts, which paid family doctors more for working shorter hours, enabling many to take early retirement … the NHS remains riddled with inefficiencies”. 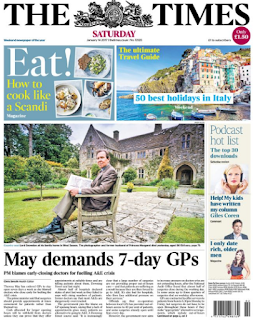 That was reinforced later with another editorial telling “At last, GPs will have to earn their keep … Days after the Mail highlighted the scandal of GP surgeries closing early, Theresa May announces action to keep them open whenever they’re needed … This is effective government at its best, tackling the overcrowding crisis in A&E departments at its root. And it’s certain that lives will be saved because of it”. Yeah, right.

Quite apart from Paul Dacre’s embarrassing schoolboy crush on Theresa May not showing any sign of abating any time soon, this attitude betrays a simplistic approach which may not be unconnected to the Mail’s editor - and many of the paper’s senior staff - going private. It was not long before exasperated GPs voiced their dissent. 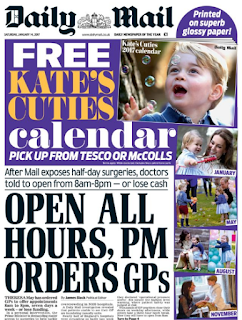 As most of the press had made up their minds on the subject, there was nothing to do but to go to the BBC, a move which will have infuriated NHS bashers. “Dr Chaand Nagpaul of the BMA told BBC Radio 4's Today programme: ‘We have got a very serious problem that we don't have the capacity in general practice … The crisis in the NHS won't be solved by scapegoating or deflecting blame on to GPs’ … One in three GP practices were reporting unfilled vacancies, while eight in 10 said they were unable to provide safe care, he added”.

It got worse: the Beeb report told that “Pressure on A&E was down to seriously-ill patients, he said, not access to GPs, and the government needed an emergency plan to tackle NHS under-resourcing … Professor Helen Stokes-Lampard, chairwoman of the Royal College of GPs, said the ‘whole of general practice and primary care’ was ‘close to the precipice’ after being ‘under-funded and under-resourced for a decade’”.

So what has the right-wing press done today? Oh hang on, look over there at Clean And Hard Brexit! Well, isn’t that fortunate for them? I wonder what Paul Mason will make of that nifty change of subject. Same old right-wing press, same falsehood and misinformation.
Posted by Tim Fenton at 13:23

One assumes that this 'effective government at its best' will be - as we speak - securing the necessary resources for my local surgery to go from a 5x10+ hours a week to the touted 7x12 opening times soon to be foisted upon them.

And, natch, in advance of a pip-squeezing Brexit, qualified and/or experienced health staff from around the world will be welcomed with open and grateful arms.

At the same time those here already will be given the assurance that they are, of course, part of the essential fabric of this country for as long as they choose to be so. End of.

And I guess we can expect a reinvigorated and well-resourced programme to encourage many more folk to consider a career in the health service. (With 10m jobs slated to disappear under the tidal-wave of automation/robotisation, this might yet happen without that extra push).