Former Watford, Aston Villa and England football manager Graham Taylor has died at the relatively young age of 72, reportedly from a heart attack. He was one of the last straight-talking, honest-thinking managers, respected throughout the game, and loved by fans at the clubs whose fortunes he improved. But the England job never worked out, and in this he was not helped by some severely adverse press criticism. 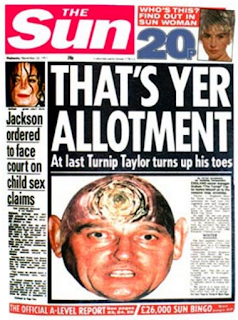 Some of the criticism goes with the territory: every England manager gets it in the neck when their team turns out not to be able to emulate that of Alf Ramsey in 1966. But for one newspaper, the tsunami of abuse directed at Taylor went well beyond merely giving him some stick whenever the national team failed to win. And that paper, to no surprise at all, is the Super Soaraway Currant Bun. What to do now the man has died?

For the Murdoch goons in the Baby Shard bunker, this was easy - just laugh it off. Thus today’s Sun editorial telling “GRAHAM Taylor never quite forgave The Sun for turning him into a turnip 24 years ago … In fairness to him, his England team’s failings were down to the players as much as him. But the buck stops with the manager. He knew it and so did the fans … That said, he was a genius at club level. Twice he propelled Watford into the top flight. And once at Villa … He had a magnificent football brain and made a fine radio pundit”. And for those not yet reaching for the sick bucket, there was more. 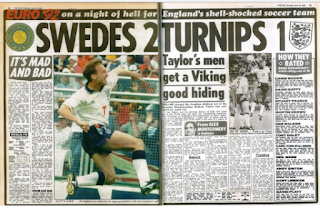 The attempt to pretend the Sun gave a crap about Taylor continues as the paper manages to include a quote from Paul Gascoigne without having its hacks hang around outside his apartment offering him booze. There was also a tribute from Elton John, who bought into his local club and with Taylor in charge of the team saw Watford rise from the then Fourth Division to the top flight. And without the Sun insulting him, either. 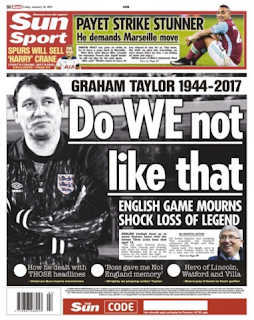 ... WE DIDN'T MEAN IT GRAHAM, HONESTLY

There is also a tribute telling “Watford and Aston Villa legend the last of a breed we may never see again in English football … PRECIOUS few have achieved feats in English football as remarkable as Graham Taylor’s” before a mention of the Sun’s sheer nastiness towards him: “We called him ‘The Turnip’”. And under whose editorship did that happen?

No prizes for guessing that the abusive treatment of Graham Taylor happened under the less than benign leadership of the deeply unpleasant Kelvin McFilth, whose column today manages to mention his former favourite sporting target … not once. Not a single mention. Not even one word. Nothing. Zip. Zilch. Nil. Nada. Not a sausage. Bugger all.

It was only a bit of fun, honestly. Just sporting banter. We didn’t really mean it. We’re sure he didn’t take it personally. And by the way, not only are we not saying sorry, even though he’s dead, the SOB who drove the hate campaign is keeping his head down.

The Murdoch Sun. An excuse for a paper, run by excuses for human beings. No change there, then.
Posted by Tim Fenton at 15:42

Increasingly the BBC website comments section is becoming infested by what appears to be orchestrated trolls. Thankfully on yesterday’s comments section those trolls were forcefully told were to go by those expressing condolences on Graham Taylor’s untimely death.
The highest rated comment being:
‘Very sad. I hope the gutter press finally show him some respect, unlike when he was England manager.’
265 supported this whilst a very sick 4 voted it down. I can only assume one them was McFilth.

Yes, the BBC comments sections are somehow populated by the most vile of people, much more than the average section of the sort.

I don't know why they have them in the first place- they certainly don't need them, and valid comments being put on Points of View are certainly enough input. No need for comment sections.

How anyone could down vote that is beyond a regular person's comprehension. I think the trolls are certainly orchestrated.

Football was of course institutionally corrupted by creation of the Premier League in 1992.

In the run up to it Thatcher even suggested all matches could be played behind closed doors and televised as prolefeed. Since Murdoch would have been the main profiteer of such, it doesn't take much thought to see where the "idea" came from. Especially since Murdoch was on the edge of utter bankruptcy at the time: televised football saved him from ruin. He would be dead in the water without it.

Sadly, Graham Taylor was only one victim of that kind of mentality. He was a good man villified by scum who aren't worth the price of his laces. There are still good and honest men in the game, but the supply is running out. At the present rate all professional sport will be different versions of Rollerball. And we will deserve it because we let it happen.