Allegedly Labour MP Kate Hoey, who represents the unfortunate residents in the London constituency of Vauxhall, has previously passed before my inspection when she allowed her name to be placed on the by-line of a Sun article making a number of highly creative claims about Section 40 of the Crime and Courts Act, part of that paper’s attempts to have the press regulation status quo preserved. 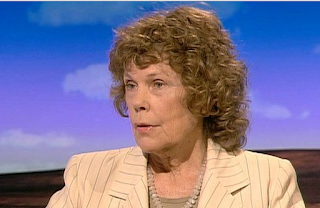 But now Ms Hoey is back in the news, if only in social media circles, for all the wrong reasons, after an ill-advised excursion on to Twitter, the true purpose of which will remain known only to Herself. The subject, as so often with those who have campaigned so ardently for Britain to leave the EU, is that of refugees, and in particular those millions who have fled the conflict in Syria, leaving homes and livelihoods behind.

As observers of the run-up to the EU referendum will know only too well, the Vote Leave campaign put out a leaflet - delivered to all households in the country - telling how Turkey, with its overwhelmingly Muslim population, was going to join the EU, and helpfully putting both Syria and Iraq on their map, just so that wavering voters had it in their mind that all those warring Syrians and Iraqis were on their way here too. 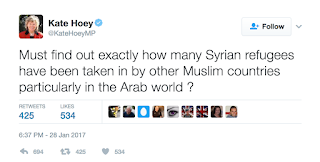 Now Ms Hoey takes to Twitter to innocently ask “Must find out exactly how many Syrian refugees have been taken in by other Muslim countries particularly in the Arab world”. Why she should have to even ask the question when the answer can be found by use of the mystical art known as “Five Minutes’ Googling”, and an article with appropriate citations is available on Wikipedia, is something that can only be guessed at.

Had Ms Hoey checked the Wiki article, she would have seen that Turkey (for all its faults in the field of human rights) has taken more than 2.7 million Syrian refugees, Lebanon an estimated 1.5 million, Jordan 1.3 million, Saudi Arabia an estimated 500,000, the UAE 242,000, Kuwait 155,000, and Egypt anywhere between 120,000 and 500,000. That makes around SEVEN MILLION refugees. And how many has Britain taken? 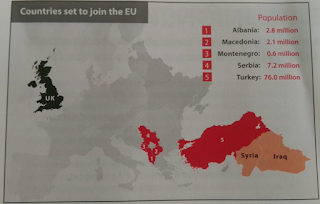 Ms Hoey has experienced considerable and severe adverse comment as a result of her Twitter intervention. Some have accused her merely of laziness; others have suggested the implication of her question was to infer - wrongly - that the Arab world was not playing its part in resettling refugees. There have been accusations of dog-whistling on her part.

The reality is most likely a combination of all three, and the conclusion is inescapable - Kate Hoey should be ashamed of herself. But not half as ashamed as many thousands of Labour Party member are of her being one of their MPs.
Posted by Tim Fenton at 13:22

Isn't Hoey one of the Labour Leave group which gave a fat donation to UKIP?

I don't understand how Hoey and Gisela Stewart haven't been deselected yet, given how they have both sided with UKIP and its fundamental opposition to Labour values

Make your own mind up about her.

I know what I think.

Her husband is the Old Man of Hoey. She says he's her rock.

There is a campaign to deselct: