Paul Dacre - Shame On You

The Daily Mail, under the less than benign editorship of the legendarily foul mouthed Paul Dacre, is always ready to take a stand on issues that it claims affect its readers. One of these is the nanny state, which is A Very Bad Thing. Hence headlines like “Cheers Mrs May, the odd drink is all right! PM set to water down nanny state alcohol advice”, and a warning  not to vote Labour, as “Ed Miliband is facing a Labour revolt over secret plans for a ‘nanny state’ crackdown on drinking, smoking and junk food”. 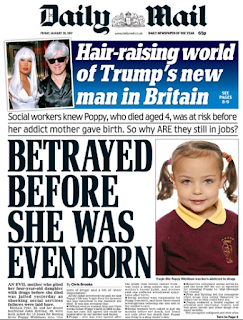 Morevoer, that “Nanny State” should not interfere with what parents get up to in front of their children: “If we let the Nanny State hound parents who smoke in cars, I dread to think who it'll pick on next” mused obedient Dacre doggie Stephen “Miserable Git” Glover. Yes, the Mail is hot on the Nanny State. And it’s hot on Council Tax, too.

Hence headlines like “Your super-sized council tax bill: Double-digit increases planned to fund growing social-care crisis”, followed by “Council tax bills in Philip Hammond and Jeremy Hunt's backyard could soar by £200 after Tory-run Surrey proposes a 15% hike to cover funding cuts and social care”. This is not a new editorial stance: the “Council Tax bombshell” was also being used to frighten readers more than a decade ago.

Other forms of taxation are also Streng Verboten at the Northcliffe House bunker: taxing benefits in kind is A Very Bad Thing, as is Ordinary Hardworking People making a little money on the side from eBay. But the Mail also deals in rank hypocrisy, so when the inevitable results of lower taxation, and the wariness of Government agencies to get involved in what parents get up to, come to pass, this too is A Very Bad Thing.

So it is that we arrive at today’s Daily Mail front page, which has added the bullying of those who cannot fight back to its righteousness and hypocrisy, with readers told “Social workers knew Poppy, who died age 4, was at risk before her addict mother gave birth. So why ARE they still in jobs? BETRAYED BEFORE SHE WAS EVEN BORN”.

After doing the business of reporting the trial of the girl’s mother and her partner: “Michala Pyke, 38, and her dealer boyfriend John Rytting, 40, were both jailed for 13 years for forcing little Poppy Widdison into ‘the mire of drugs’ and a life of ‘utter degradation’ … As the judge sentenced the pair, he said Poppy’s life was ‘tragic from the moment she was conceived to the moment she died’”, the bullying and demonisation kicks in.

“Social services were responsible for Poppy from birth, and three times closed investigations believing she was safe in her mother’s care … Social workers were called in just six months before her death, but found out only after her death that Poppy was living in a drug dealer’s den … Relatives criticised social services, and the local MP hit out at agencies for allowing Poppy to ‘slip through the cracks’”. Yes, They Done It.

But despite the little girl’s uncle saying the family “didn’t blame social services” and “We couldn’t have foreseen what happened and we don’t believe social services could have either”, once again, there is the Mail baying for social workers, the over-stretched, under-resourced workers who tried their best but were unable to summon their crystal ball and non-existent rapid response team, to be sacked.

Paul Dacre is, as Nick Davies recalled one journalist’s claim in Flat Earth News, the go-to book on the workings of the Fourth Estate, the biggest bully of all. Cushioned by his million pound plus remuneration package, luxury lifestyle, private health cover, chauffeured travel, and a generously paid, but fearful and obsequious staff, he can sit in judgment on those at the bottom of the pile and somehow feel better at the end of it.

UK is about to have some of the strictest internet censorship outside of China, Iran and Saudi Arabia imposed on it by May's govt under the fatuous and spurious excuse of protecting children. Where are the screaming headlines in the gutter press about the Nanny State taking away our freedoms?

But it's all grist to the mill of Daily Heil hypocrisy writ large.

Yet GP's can go abroad with three children and return with only two and are free to do as they please.
Apparently it's only the plebs that need watching and holding to account.

Murdoch was OK with it.