Our not at all unelected Prime Minister is off on her travels once more, this time to the USA where tomorrow she will meet the Combover Crybaby Donald Trump, a meeting at which many observers who dislike both of them would still like to be the proverbial flies on the wall. As befits the occasion, the right-leaning part of the Fourth Estate has talked up the meeting, oblivious to the very real prospect that it will serve no useful purpose. 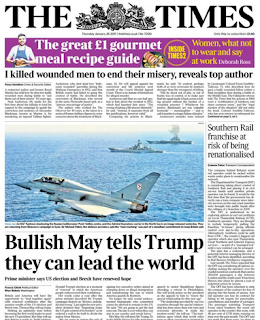 Theresa May has staked the house on showing that she alone can leverage meetings like this to improve Britain’s standing in the world, that pressing on with leaving the EU is nothing to be afraid of, and that no tainting of her reputation will take place merely because The Donald is suggesting the USA might bring back torture, exclude visitors who might be followers of The Prophet, and is still regarded as an ocean-going sex pest.

Many in the press are not troubled by this, with the Murdoch Times being particularly keen to tell “Bullish May tells Trump they can lead the world”. There would, it has to be conceded, be the advantage of stroking Trump’s vanity with such an approach. Even the Guardian is happily proclaiming “May on US mission to seek special deal with President”. At least the i has cautioned “May’s tricky trip to the US”. 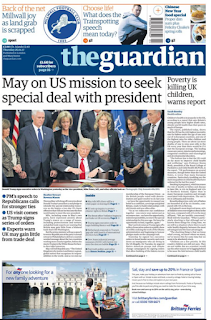 The BBC has confined itself to the more prosaic detail: “Theresa May is to vow to renew the UK's special relationship with the US ‘for this new age’ as she prepares to meet Donald Trump for the first time … Mrs May has said her goal is to build on the historic relationship between the two nations, underpinned by their shared values and common interests”. There will be straight talking, we are promised.

But then, what does Trump need to give the UK? We hear that he is an Anglophile, as his mother was Scottish, but he has already prioritised renegotiating NAFTA. Under this Presidency, the USA is set to become both protectionist and isolationist. He tells anyone who will listen that we will be at the front of the line for a trade deal, but he won’t be negotiating it, and nor will he care what it contains. 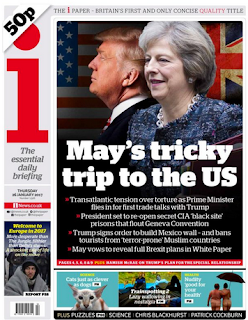 Let’s put this plainly: Donald Trump is not only a deeply unpleasant man, but a deeply ignorant one. His fans say his ability to do deals will be the key to a successful Presidency - yet many of the deals he has made in the past have resulted in Chapter 11 bankruptcy. He spends much of his time alone, watching the TV, and all too often believing what he is served up by Fox News Channel (fair and balanced my arse).

In this he resembles not a great and successful businessman, but a latter-day Chauncey Gardiner, an empty being spewing out simplistic platitudes which the easily led - and the less principled shysters with whom he has surrounded himself - interpret as the product of great wisdom, patriotism, business acumen, and a new and original take on today’s realpolitik. Those shysters will decide what he gives Theresa May.

And then it will all have to pass Congress, which might look rather different after the next mid-term elections. Once again, our Prime Minister’s magical ability is being talked up, but with no rational expectation of success. Trump will not be our post-Brexit magic bullet.
Posted by Tim Fenton at 12:13

This the first time I've heard a yapping poodle can lead a herd of rabid dinosaurs.

Will she make the trains run on time?

I don't why politicians are pandering to this utterly ignorant bully Trump who seems as deluded as North Korea's Kim Jong-un.
The UK's RAF Menwith Hill is the USA's top European communications base and for that matter Australia's Pine Gap is undoubtedly America's most important world communications base which cannot be re-created anywhere else due to his unique location.
May should inform this ignorant sod with his isolationist claptrap that's it's a two-way street and his aggressive pose as the world's new strongman is predicated on the fact a dozen countries around the world host strategic bases that have not only been invaluable during the US Middle East incursions but are vital for it's survival.
He seems dedicated to making the mistake Australia has over the last 20 years under various governments where they treated the South Pacific nations with contempt and arrogance demanding obsequious grovelling for the pittance in aid they offered. China has now spent 10 years stepping into the breach with financial aid to the point most of the South Pacific now sees China as it's greatest ally.
The chances are the idiot Trump is totally clueless to how the US has invested $$multi billions in shoring up local support around the world or, is there something more sinister in the claims Vlad Putin is intent on not only breaking up the EU but weakening the US worldwide defence network?.
Trump continues to play to his support among the red-neck Tea Party loonies most who are totally ignorant to life outside their own counties but May has already indicated to Trump he has the upper hand when in reality he doesn't.
Apart from that his tenure is surely temporary as the CIA engineer the removal of the man who grievously insulted them so it will be President Pence within 2 years and that's where the real power is.