It was the moment when the phone hacking scandal, which had been coming to the boil for the previous two years, finally burst open and showed the public the sheer unprincipled nastiness of the tabloid press: Milly Dowler, abducted and brutally murdered by Levi Bellfield, had had her phone hacked by the now-defunct Murdoch Screws. Moreover, the Police knew they had done it - but took no action as a result. 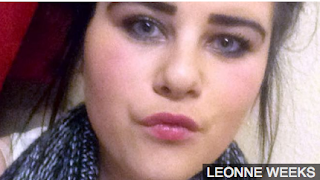 Part of the public revulsion was the realisation that the press were more than happy to prey on schoolgirls and their friends in order to flog a few more papers. There were, it seems, no limits to the intrusion that hacks would make, and that their editors would countenance. The thought entered that the Dowler killing would put an end to that sort of thing. And that thought would have been sorely misplaced.

We know this because after 16-year-old Leonne Weeks was found dead on a footpath in the small South Yorkshire town of Dinnington, where her family lived, the press descended and were soon up to their old habits. Social media accounts were scoured for anything about the dead girl that could be recycled as cheap and easy copy - it’s in the public domain, so none of that having to pay to use photos.

That much was bad enough for grieving friends and relatives. But then, the school that Leonne Weeks had attended until very recently put out a Facebook post warning “Please can we suggest parents and carers talk with their children about contact through social media. Some members of the press have been contacting students this way to try to get photos and information”. That is bang out of order. 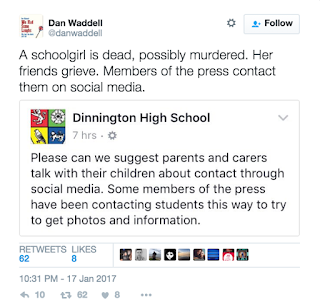 Not only that, it is a clear breach of the IPSO Editor’s Code of Conduct. So where is the stern warning on the IPSO website this morning, given Dinnington High School sent its warning out yesterday? But you know the answer: the headline items have more to do with whining about Section 40 of the Crime and Courts Act and Leveson Part 2.

So who is behind this intrusion? We cannot be certain. But my Occam’s Razor is pointing at just one of The Usual Suspects, because of their tendency to draw attention to themselves rather than lying low and keeping Schtum. And, to no surprise at all, that suspect is the Murdoch Sun, which has published a piece titled “MAJOR INVESTIGATION What happened to Leonne Weeks? Teenage girl found dead in Dinnington – here’s what we know so far”. And so we have another echo of the Dowler killing.

The Screws waded in to that case as if they were part of the investigating team. Now the Sun gives every impression of doing the same thing again, using headlines like “What happened to Leonne Weeks?” and most tellingly “What do her friends think?” In another Sun article, social media accounts have been trawled to get comments.

Whoever prompted Dinnington High School to send out its warning, the journalists concerned know they have overstepped the line. They can also be confident that sham press regulator IPSO will wipe their backsides for them. Not much has changed in the five and a half years since the Screws crashed and burned over Milly Dowler.

The press never learns. That is why we need properly effective press regulation.
Posted by Tim Fenton at 10:19

As Home Secretary the current PM would have been fully briefed on the Daniel Morgan murder before her meeting with his brother Alastair.

Since becoming PM she has gone out of her way to meet the owners of the organisation not only involved in the cover up of that murder but involved in the phone hacking and PC hacking scandals.

She has also appointed as Ministers people who have been shown in the past to be completely untrustworthy to negotiate the Brexit "plan". And we are now told by The Sun (apparently, I don't read it) that the "plan" is in accordance with their goals.

There is an implication that something sinister is going on behind the scenes and that Murdoch, not the PM is in control, otherwise why would she continue to satisfy the demands made by an apparently foreign criminal organisation that is allowed free rein in the UK although controlled from without.

So my question would be, what Damocles sword hangs over the PM and/or the Tory Party? Something to do with finance and/or what is contained in the legendary safe of secret dossiers?

Seems that Dacre's pound-shop hacks have also been at it judging by Dan Waddell's Twitter feed:

While taking the press to task for pinching photos is fraught, I believe the copyright of a photo still remains with the copyright holder, usually the person who took the photo. Just because people share pictures doesn't make them 'public domain'?

So in scouring Facebook, Twitter etc for whatever they can find to use to flog papers, the press is still behaving not exactly lawfully.

Anyone who has had a picture nicked & isn't happy (even with an attribution, though often that doesn't happen either) should contact the paper concerned and demand a few readies.

This kind of thing will never stop as long as liars and hypocrites like Murdoch and Rothermere are allowed to own and publish their muck.

If we have a "fit and proper test" for company directors, why not for media owners too?

At a personal 'ground-floor' level, how isn't this behaviour classed as stalking, harassment, bullying.

Would pretty much feel like it to the families and friends being hounded.

And, i imagine that at some point, female hacks are involved too. How sad is that.