The push against Section 40 of the Crime And Courts Act, and Part 2 of the Leveson Inquiry, by the Murdoch press has reached such a desperate state that not only has the Sun engaged the services of maverick Labour MP Kate Hoey to lie her socks off - as I pointed out yesterday - the supposedly upmarket Sunday Times has brought in Mick Hume to man the barricades. This is a singularly unfortunate choice. 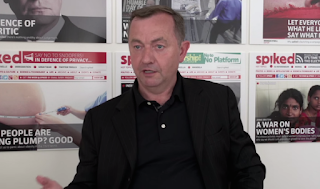 Mick Hume - not a credible pundit

In an article titled “Revealed: The Plot To Stop You Reading The Truth” and subtitled “Government approval of a new media regulator opens the door to a law that poses a dire threat to the free press and democracy” - which is in itself dishonest, as the Government has not approved any media regulator, and cannot - Hume obediently takes out his Murdoch-mandated onion and claims the press is under attack, which it is not.

The claims may persuade some, even to the point of cutting out that Sunday Times branded form at the foot of the page and sending it off to Culture Secretary Karen Bradley. But anyone placing any credibility in Hume’s claims would do well to look more closely at his past form, where an ability to make disastrously wrong calls has on more than one occasion left him covered in rather more than confusion.

Hume was the editor of a magazine called Living Marxism from 1988 until 2000, when the publication closed after losing a libel action. As George Monbiot recalls, it “had made false claims about ITN’s footage from the Trnopolje camp, in which Bosnian prisoners were held by Serb forces”. Living Marxism claimed that the figure of 8,000 murdered at Srebrenica was somehow wrong, concluding that 8000 was “a more useful number for propaganda purposes than 800”. And there was more. A lot more.

The magazine carried sympathetic coverage of Radovan Karadzic, now serving 40 years’ imprisonment for genocide, war crimes, and crimes against humanity. Also getting the soft soap treatment was Ratko Mladic, now on trial on similar charges. After Living Marxism closed, Hume started an online successor called Spiked, in which he claimed that the concept of a war crime was a “highly questionable notion”.

Living Marxism, as Monbiot also notes, attempted to cast doubt on the genocide in Rwanda, running one article which claimed “this was not a pre-planned genocide of one tribe by another. Those targeted by government militia were Tutsis and Hutus suspected of supporting the RPA invasion”. Hume repeated previously discredited claims about the Rwandan genocide in a Times article in 2004. 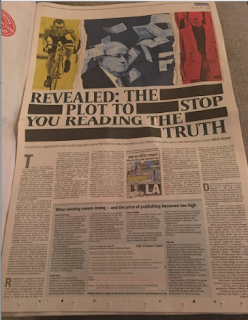 And, although the title Living Marxism suggests an affinity with the left, the magazine was ultimately about the libertarian hard-right, those for whom the freedom to shout “Fire” in a crowded theatre is held to be sacrosanct. It goes without saying that the worst aspects of press misbehaviour do not feature in Hume’s Murdoch apologia.

Yet this is the pundit to whom the Murdoch mafiosi turn when they want to persuade their readers of their cause. And the genocide denialism is not Hume’s only seriously wrong call, as Zelo Street regulars who have been looking in on the blog will recall from the dim and distant past - well, July 2011, anyway.

Here, in one of many Murdoch Is Served posts - the list extends to more than 100, all covering the phone hacking scandal - reference was made to a Spiked article by Hume dated July 2009. This has since been deleted, but thanks to the Wayback Machine we can see The Great Man’s thoughts, and that he called it totally wrong.

“From whichever side you look at it, the unavoidable truth is that the Guardian’s campaign, accusing the News of the World of tapping the phones of ‘thousands’ of public figures and celebrities, has been a badly misjudged pathetic mess. It shows what can happen when scandal-mongering and mutual dirt-flinging become not the preserve of Sunday tabloids, but the stuff of serious public debate” he began. And there was more.

“The Guardian claimed that News of World reporters had colluded with private investigators to tap into the phones of thousands of public figures, from former deputy prime minister John Prescott to Manchester United manager Sir Alex Ferguson and celebrities such as Gwyneth Paltrow and Nigella Lawson. Moreover, it reported that the ‘Murdoch papers’ had paid out £1million to ‘gag victims’. The revelations made big headlines everywhere last week. There was much talk of the heavy consequences this would have for the NoTW, for various NI executives, and for Andy Coulson, the former News of the World editor who is now Conservative leader David Cameron’s press supremo”. Why the quote marks? The Guardian claims were all true.

But that was not how Hume saw it at the time: “After a week of confused and confusing allegations and counter-allegations, the only thing that seems clear is that, whatever went on at the NoTW, the Guardian is not breaking a big new scandal, and cannot make its central allegations stand up”. Two years after he wrote that, and two days after I referred to it in a post that followed the Dowler hacking revelations, the closure of the Screws was announced. The paper’s final edition followed three days after the announcement.

“But as everybody waited breathlessly for the Guardian to publish further details, it became clear that there were none. John Yates, assistant commissioner of the Metropolitan Police, announced that he had reviewed the Goodman case and there was no new evidence to justify reopening the inquiry”. Yates of the Yard later quit the Met over the scandal.

Could Hume dig himself in any deeper? He certainly could: “How did Britain’s leading liberal newspaper come to stake its reputation on such a sorry excuse for an investigation? It reflects the way that the desperate search for scandal has become a central obsession of politics and the media in recent years, often at the expense of far more important arguments and issues”. And what would be the cause of this obsession?

“There is the Guardian’s self-righteous desire to present itself as the champion of the moral high ground, passing judgement on all below – a position the paper has fancied itself in since it launched the crusade against Tory sleaze in the run-up to the 1997 General Election … Then there is the eagerness of New Labour to use the Guardian story as a stick to beat Cameron’s Conservatives over his close association with former NoTW editor Coulson … And there is the wider enthusiasm of MPs and the political establishment to take any chance to hit back at the ‘corrupt’ media”.

Mick Hume was not just wrong. He was spectacularly, ridiculously, wilfully and catastrophically wrong. His conclusion, “Put all that together and you have a collection of interests keen to see a major scandal and pretty blind to the relative lack of evidence” just makes him look yet more ridiculous. And on top of that, he was clearly relaxed about the ways in which some in the press have gone about their information gathering.

“Journalists always use underhand and illicit methods to obtain information. This is necessary because they are trying to uncover things that others do not want them - or us the readers and viewers - to know”. He then accused the Guardian of indulging in dubious practices, of “some underhand dirt-digging in its campaign against sleaze”.

And this wrong-headed genocide denier is the one the Murdoch press turns to in its hour of need. Desperation does not adequately describe the state of those in the Baby Shard bunker if the best they can do is to call on someone who called the phone hacking scandal wrong to an extent unmatched by his peers. Not even the serially clueless Tim Montgomerie, later awarded the Murdoch shilling for his grovelling, nor the flannelled fool Master Harry Cole (ditto) managed such spectacular wrong-headedness.

The Sunday Times, in commissioning Mick Hume, is bidding farewell to the last remaining strands of credibility that the name on the masthead bestows upon it. Someone who excuses war criminals, denies their crimes, and can’t bother to do the most basic of research on stories like phone hacking, does not possess any credibility.

Murdoch and his mafiosi are out of time, out of ideas, out of explanations, and their only hope is to maintain their hold on weak and corruptible politicians. End of story.
Posted by Tim Fenton at 12:58

The notion that Murdoch's goons at the Sunday Times ever tell "the truth" had me too enter The Wayback Machine.

All the way back to 1989 in fact when Andrew Neil was the editor and it had employed right wing talentless trollops like Ian Jack "writing" and editing it.

Neil sanctioned a headline "The Truth," which essentially parroted the methods of the coward MacKenzie in manufactured lies and propaganda about the Hillsborough Disaster.

Later, Jack became notorious for his hate-filled political attacks on the city of Liverpool. As late as 2009 (by which time the facts of Hillsborough were well known) his pile of worthless shit "book" titled The Country Formerly Known as Great Britain contained no apologies or even passing mention of his part in the lies. In an "essay" titled Blitz Spirit he even managed to avoid mentioning the fact that Liverpool suffered the highest civilian casualty rate of the May 1941 Blitzkrieg.

These two liars were and are typical of the cowardly depths "journalists" plummeted to in that era. They enjoyed it so much they took the method with them wherever they went. Neil is of course now at the BBC peddling his muck, while Jack occasionally helps the Guardian destroy what's left of its reputation.

So there's nothing new in the Sunday Times or Hume. Both of them are par for Murdoch's corrupt course.