The people at the 89up website want you to know that they are in favour of free speech. This is most reassuring. Some of them also want you to know that commencing Section 40 of the Crime and Courts Act would be harmful to free speech, which is not true. This does not deter them: people like Michael Harris and Padraig Reidy are clearly on a mission to campaign for their beliefs, and to have their opinions carry the day. 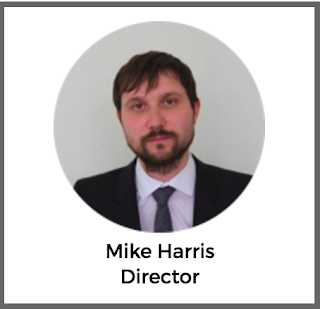 To this end, 89up has set up a “campaigning site” which claims Section 40 is a “Gagging Clause”, which it is not. Harris has claimed, in addition, that Leveson did not propose Section 40, and that this was “drafted badly behind closed doors with no consultation”. Leveson and the subsequent discussions which resulted in the Royal Charter on press regulation featured extensive consultation with every imaginable interested party. But they should have left the door open, because, er, because. 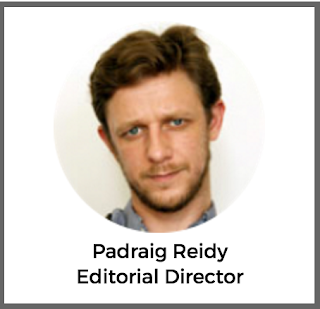 Perhaps Harris and his pals also believe the “dreamed up over pizza in Ed Miliband’s office with Hacked Off present” canard. Belief can be an interesting concept. It can be so interesting that it can be not only formed, but, for an appropriate sum of money, it can also be bought, although of course Harris denies such things influence his thinking.

Meanwhile, Harris and Reidy happily venture on to Twitter to let their followers know that “Hugh Grant's complaints against press end with a  a free pass for every oligarch on the planet”, and to praise Andrew Norfolk for claiming Section 40 “loads the dice in favour of criminals” (Norfolk writes for the Murdoch press, who know all about loading the dice in favour of criminals, especially the ones they used to employ). 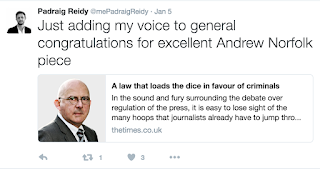 What you will not see Harris and Reidy do is say anything for the victims of press abuse, the little people at whom the press establishment stick their fingers up and tell to “come and sue us if you think you’re hard enough”. That only the rich - yes, oligarchs, crims, and the rest - can afford to get redress when the press defame and smear them, well, these noble and principled free speech campaigners manage to forget. Easily done, eh?

Actually, this is not accidental, nor some kind of forgetfulness. That is because Harris and Reidy are, as I suggested earlier, being paid to sing for their suppers. Their paymasters are the News Media Organisation, a front for the press establishment. In other words, they are being paid by the press to say that the press is right. This they do with panache, élan, more than a little of that bravado and derring-do, and utter shamelessness.

“My views haven’t changed since I worked at Index” protests Harris. Press regulation reform, Leveson, Section 40 and Leveson 2 on the menu there, was it? One has to wonder if there is anyone out there batting for the press establishment who is not directly or indirectly on their payroll - or, like some of the less principled hangers-on, merely cheering for them in the hope that someone will throw them a biscuit.

Michael Harris and Padraig Reidy may not believe or accept it, but they are fatally compromised on this issue. Moreover, they are propagandising, and dishonestly so. They are not alone. The press establishment knows that groups like 89up are the finest advocacy money can buy. That’s why they’ve bought them.

[UPDATE 2110 hours: Messrs Harris and Reidy have become particularly righteous about this post, tellingly spending inordinate amounts of time on Twitter trying their best to make me feel guilty about saying boo to such august and principled individials.

However, and here we encounter a significantly sized however, it now transpires that 89up is of such high principle that it has sponsored content with the perpetually thirsty Paul Staines and his rabble at the Guido Fawkes blog - a borderline Fake News site.

This post, creatively titled "Stop The Gagging Order - Save The Free Press", contains assertions like "Section 40 of the Crime and Courts Act, cooked up by Hacked Off and Brian Leveson". Strangely, Harris has claimed on Twitter that Leveson didn't devise Section 40. And Hacked Off have not been drafting legislation.

I'm sure there will be a perfectly good explanation from the 89up people. But maybe not for some time]

How tedious this is all becoming.

A bit disappointing to see the i and Standard joining in the "everything but IPSO is sh*t" bandwagon. And now even my local papers are echoing all the dreary sentiments.

Interesting piece by Bonnie Greer in the last New European, on the idea of Beliefs Versus Values. I bet very few of these apologists read that.

Unconvincing and sensationalist piece. More facts and less opinion would be handy. Many journalists are paid for their work because they can actually write.

That was both provocative and intelligent.

If only the social media ruckus going on right now were up to the same standard.

Tim, if we are wrong about section 40 and you are right to suggest there is no chill on free speech from bloggers being regulated then why won't you join IMPRESS?

Projection, windups and false assumptions are as unsuccessful here as on Twitter..

An old friend of mine Tweeted a link to that bogus website and its fraudulent petition last night. I was so concerned that he had been misled by such blatant astroturfing that I e-mailed him, directing him to some of the pieces you've published re. s.40, Leveson 2 and IMPRESS.

He e-mailed me back to tell me that, "If it curbs the lies of the Scum, the Abscess, the Daily Heil and the Torygraph [...] then I'm all for Article 40, then.", and deleted his earlier Tweets. Result!

"One has to wonder if there is anyone out there batting for the press establishment who is not directly or indirectly on their payroll - or, like some of the less principled hangers-on, merely cheering for them in the hope that someone will throw them a biscuit."

The fact is, almost everybody these days is shit scared to open their mouths about corruption in the organisation they work for. Which, in the end, makes even the "innocent" guilty. And in law silence or ignorance of the law is no defence anyway. "Journalism" is simply the most obvious.

But we are only in the cultural foothills of decisive social change. All of it is fired up by the internet and wider expression of opinion. Only outright fascism can try to stop it. But it can only be slowed, not prevented. God knows what desperate lengths the establishment will go to preserve itself - the last century doesn't provide much encouragement they'll come to democratic terms with the inevitable.

This pathetic and corrupt episode is only symptomatic......but ominous.

"Journalists" meanwhile will do what they almost always do: Lie. It's what they're paid for......they're too scared and cowardly to do anything else.