The Murdoch goons at the Super Soaraway Currant Bun have thus far got away with yesterday’s crude front page story about Olympic medallist Tom Daley. They should not be allowed that luxury. This was not only what looks suspiciously like a planned and targeted entrapment, but a precursor of the next source of big, yet cheap, red-top splashes to replace all the ground lost after phone hacking got rumbled. 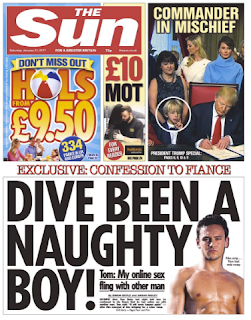 That front page says it all: “Exclusive: Confession To Fiancé … DIVE BEEN A NAUGHTY BOY! Tom: my online sex fling with other man”. There was not, sadly for the Murdoch mafiosi, any actual sex. Nor, more importantly for those who actually care about ethics in journalism - something many Sun hacks probably think means the area round Southend - was there any public interest in running the story.

So what actually happened? “Tom Daley confesses to fiance Dustin Lance to online sex with another man and vows to stop after video emerges of Olympic hero stripping for cyber romp … Olympic diving medallist Tom Daley admits cyber sex but said it happened when he and fiance Dustin Lance were on a break”. Who is this “Dustin Lance”? That, folks, is Dustin Lance Black, but the Sun and journalistic standards, eh?

And once again, what actually happened? “OLYMPIC diver Tom Daley told how he confessed to his fiancé that he had online sex with another man … Tom said: ‘It will never happen again’ - after film emerged of him stripping for a cyber romp … The Olympic diving ace revealed it took place in a ­seven-month split from hubby-to-be Dustin Lance Black … But he pledged: ‘This will absolutely never happen again now that we’re getting married’”. 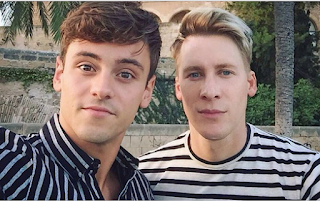 What, pray, is an “Online Romp”? If it’s online, it’s not much of a “romp”, is it? So what actually happened? “The Sun can reveal Tom first made contact with a male fan from Liverpool in February 2016 - just months after announcing his engagement to American Dustin … He sent the lad a love heart emoji in a private message from his Instagram account and told the 23-year-old stranger he was ‘fit’ before sending his mobile number”.

But there was no meeting. And we don’t get to find out who the other man was. Nor do we find out when he went to the Sun, or indeed what the Sun’s role was. Did the other man have any connection to the Murdoch press? Ah, but readers don’t get that one answered. Was Daley deliberately targeted? Nope, no answer on that, either. But we do get the sneering “hubby-to-be”, which isn’t because Daley is gay - perish the thought!

“The diver has fronted a charity campaign urging young people to think carefully before sending sexual images and videos online”. Apart from the BBC’s Share Take Care initiative, which Daley did not front, but in which he gets a mention, there is apparently nothing of that nature out there. Still, details, eh?

Behold the latest Sun wheeze to boost sales. It’s journalism, but not as we know it.
Posted by Tim Fenton at 10:59

Why anybody should have the slightest interest in someone else's personal or sex life is beyond me.

I don't know who is saddest......the people whose lives are so empty they write it, or those who are so stupid they pay to read it.

Murdoch, his "journalists," and his "readers" all deserve each other.