That part of the Fourth Estate devoted to pushing only relentlessly upbeat news about Britain’s departure from the EU has been spinning for its supper today after an equally upbeat speech by Environment Secretary Andrea Leadsom, who, the press seems to have forgotten, failed in her Tory Party leadership bid last year partly because she was perceived to be individual to the point of eccentricity. 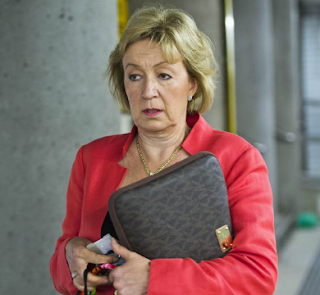 Nonetheless, the Express, aka the Daily UKIP, has enthusiastically reported her latest speech: “Ms Leadsom vowed British farmers will no longer have to display large billboards declaring they receive EU funding … Brussels rules requiring farmers to grow three different crops each year should also be abandoned with Brexit, allowing 40,000 farmers to grow the crops they want, she added”. And there was more.

“The Environment Secretary insisted 2016 will be remembered as ‘the year the UK chose to do a whole lot more than just survive’ following the historic Brexit vote … She said: ‘Our ambition both as a country and as an industry should be to grow and prosper like never before’”. The increasingly downmarket and desperate Telegraph was also on board, proclaiming “Brexit to spell the end of burdensome EU billboards for farmers”.

The Tel’s enthusiasm knew no bounds: “Following Britain's departure from the EU in 2019 the Government will scrap rules which require farmers and rural businesses to pay for and display billboards or posters which publicize the EU contribution for grants to grow their businesses … These signs measure as much as 6ft x 4ft and must be displayed permanently to avoid a penalty of thousands of pounds. The Government will also ditch the ‘three crop rule’ which sets out how many different crops farms must plant each year”.

Only further down the Tel’s article does reality intervene: if the billboards go, then with the certainty of night following day, so will the subsidies that go with them. Falling back on WTO tariff rules - providing the other 160-plus WTO members agree, of course - will mean the UK’s lamb and beef exports would face tariffs of 30% and 50% respectively.

But, so what? Well, 95% of our lamb exports go to other EU member states. And there are plenty of other suppliers waiting in the wings, able to undercut our prices once WTO tariffs are applied - those from, for instance, South America. Yet all that is subservient to the relentless march of obligatory good news, with the Mail also chipping in “The [EU] rules also require farmers to set aside 5 per cent of their land for ‘ecological focus areas’ around hedges, ditches and ponds … Whitehall officials say that, outside of the EU, more ‘common sense definitions’ can be introduced”.

We can see that this line is suspect, because was can also see where it originated this morning, as early as 1201 hours. Yes, to no surprise at all, the highly selective promotion of Andrea Leadsom emanated from the perpetually thirsty Paul Staines and his rabble at the Guido Fawkes blog. All the talk there was of “Barmy Brussels diktats”, rather than the grim reality which would hit and most likely decimate our farming industry.

But that’s what you get when you go with Fake News sites. And the incessant pushing of only positive stories, without letting reality intervene. Another fine mess, once again.
Posted by Tim Fenton at 16:42

it is important to note that the so-called billboard for EU grants is not an EU regulation (you won't see much of them on the Continent, except for when EU structural and regional funds are deployed), but how Whitehall has decided to transcribe in UK regulations the transfer of any grants or subsidies from the EU.

it wouldn't take much to think that this is another example of maddening, self-inflicted gold-plating ... or go conspiratorial, and find the perverse hand of eurosceptics behind such rules

The truth is that the wonderful future the Leavers are planning will be one of low standards and high exploitation. You can bet that their private discussions are about removing environmental standards, welfare standards and other protections in a race to the bottom.

6ft by 4ft? My gods, it's a wonder you can even see the farms behind these billboards!

SimonB
John Whippingdale was on the radio promising more GM and more pesticides.

The "three crop rule" is the basis of agronomy, the science behind arable farming. It's not bureaucratic meddling, rather an effort to make sure soil doesn't get depleted by sucking the nutrients out of it. Leadsom's vision seems to be 3 years of high yield crop production and then nothing.

It wasn't Whippingdale on the Today programme, but former agriculture minister Owen Paterson, that well-known shill for the major chemical and biotech companies.