The combined idiocy of the remaining hacks at Richard “Dirty” Desmond’s supposedly flagship title, the Daily Express aka Daily UKIP, and UKIP MEP and freeloader supreme Roger Helmer - so keen to show that he is giving voters value for money that he uses European Parliament sessions to catch up on his sleep - has today brought forth a magnificently inept foot-in-mouth episode. 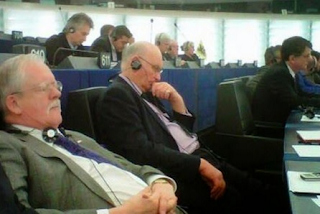 Roger Helmer being handsomely rewarded for ... doing nothing

The Express, notorious for shonky copy ever since Dirty Des sent all the paper’s sub-editors down the road in another of his whizzo economy measures, had published a story titled “‘End freedom of movement’ Pressure mounts on May to SCRAP Schengen IMMEDIATELY”. The title uses CAPITAL letters to make sure angry READERS know exactly which WAY they are supposed to THINK. 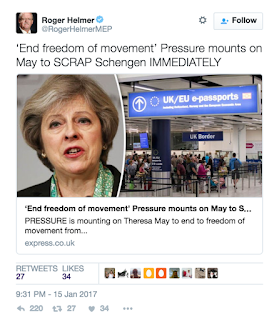 OH WHAT A GIVEAWAY!

Helmer was all in favour of this idea, despite (a) the UK not being a participant in the Schengen agreement, (b) the UK therefore not being part of the Schengen area, (c) the Schengen area and Freedom of Movement being two different things, and (d) Theresa May not having any say in what happens to the Schengen Area. As a result of this demonstration of idiocy, Helmer attracted significant adverse comment. 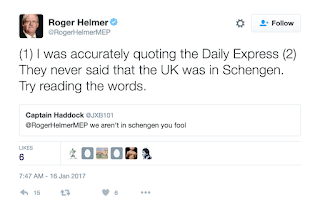 What to do? Would The Great Man have to ‘fess up and admit he was the Grade A plonker many had suspected for some years? But you know the answer. For a Kipper like Helmer, he takes the same stance as with climate change - straightforward denial. So when told the UK was not in Schengen, he snapped “(1) I was accurately quoting the Daily Express (2) They never said that the UK was in Schengen. Try reading the words”. 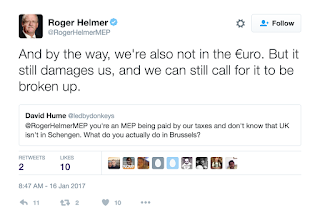 Readers are referred to the Express headline as quoted by Helmer. It’s all too clear that the paper’s readers are supposed to at least infer that the UK is in Schengen, that Schengen and Free Movement are the same thing, and that we have some influence on the former. All of that is plain flat wrong. And in any case, his critics should look over there: “And by the way, we're also not in the €uro. But it still damages us, and we can still call for it to be broken up”. And how does it damage us? A little evidence? No, thought not. 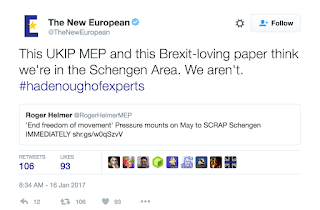 After The New European also joined in the mockery, Tweeting “This UKIP MEP and this Brexit-loving paper think we're in the Schengen Area. We aren’t”, Helmer again demanded that they looked over there. “I think no such thing. But unlike you I see how Schengen damages Europe, and leads to mass migration and the Calais Jungle Camp”. The refugees came as a result of conflict elsewhere. Oh, and Look At All Those Brown People! 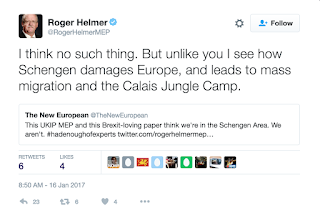 Meanwhile, the Express tried to cover its tracks by re-wording its article to tell “Pressure mounts on Theresa May to SCRAP freedom of movement IMMEDIATELY”. Two things here. One, whatever the Express says, Free Movement cannot be scrapped immediately, and two, the covering of tracks isn’t going to work if the article’s URL still has the word SCHENGEN as part of it. Dirty Des’ cheapskate press fouls up yet again.

But we knew that the Express were a bunch of clowns. Now Roger Helmer has let everyone know that he is one too. And we’re paying for his siestas.
Posted by Tim Fenton at 16:53

Roger Helmer also claims political legitimacy from being an elected MEP... yet I don't recall him ever announcing surgery dates, and I'm one of his constituents.

Chase him up on https://www.writetothem.com

Helmet makes a big thing about being an ELECTED MEP. But I thought that the EU was undemocratic......

'But it still damages us, and we can still call for it to be broken up'

Not for much longer we can't. We're leaving remember, do pay attention.