Brexit Euphoria - A Warning From 1925

After Theresa May gave her much-anticipated speech yesterday on the manner of Britain leaving the EU, the response in the right-leaning press was rapturous. All the hype had been worth it, the Prime Minister could no longer be regarded as weak or indecisive, the rotten foreigners had been told where they got off, and they could tell their readers that Britain was once more a great, independent and sovereign nation. 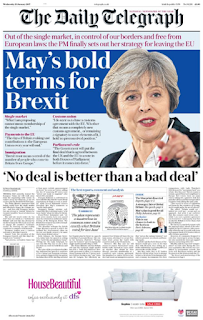 This only served to add euphoria and delusion to the preventive incantation which I described recently. Once again, the lesson from history is there to be leaned, but the press is too taken up with its adoration of Ms May to take any notice. So unlike those who scrabble around the dunghill that is Grubstreet, I will once more consider reality, and turn to the late economist and commentator J K Galbraith to remind us what happened in 1925.

“[Winston] Churchill presided over the most dramatically disastrous error by a Government in modern economic history. It was [John Maynard] Keynes who made it famous … The mistake was the attempted return to the gold standard at the pre-war gold and dollar value of the pound … 4.86 dollars to the pound … Churchill was Chancellor of the Exchequer”.

Why did Churchill make the move? “To go back to the old exchange rate of pounds for gold and dollars was to show that British financial management was again as solid, as reliable, as in the nineteenth century. It proved that the war had changed nothing. It was a thought to which Winston Churchill, historian and professional custodian of the British past, was highly susceptible” [my emphasis]. 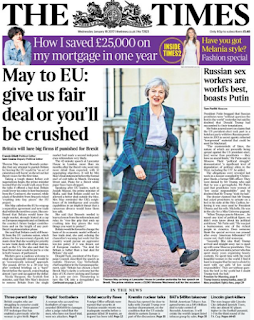 Then, as now, the reaction of the press was little short of euphoric. “The country responded well to Churchill’s House of Commons statement. The New York Times said in its headline that he had carried ‘PARLIAMENT AND NATION TO HEIGHT OF ENTHUSIASM’. Keynes wrote instead to ask why Churchill did ‘such a silly thing’”.

What Churchill had done was to make British exports around 10% more expensive. The result was to cripple the industries that depended on exporting: shipping, steelmaking, mining, motor vehicles, railway locomotives and rolling stock, and other heavy engineering disciplines all suffered. Unemployment rose significantly. For many of those affected, there was no respite until another war arrived fourteen years later.

Fast forward to 2017, and the parallels are clear. The press is once again euphoric, as today’s Telegraph, Times and particularly Daily Mail show. No-one, it seems, wants to look beneath the gloss and the froth and thereby face reality. Theresa May has painted herself into a negotiating corner. She has revealed the limitations of her ambition to the other 27 EU member states, and particularly to Germany, and Angela Merkel. 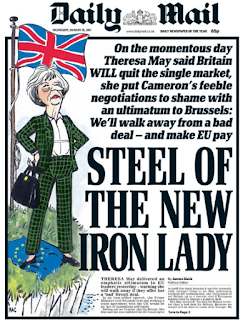 As Matt Qvortrup has told in The Staggers, “By accepting that the ‘UK will be outside’ and that there can be ‘no half-way house’, Theresa May has essentially caved in before the negotiations have begun”. He reminds his readers that in May last year, “May was still battling for access to the internal market. It is a measure of how much her position has weakened that the Prime Minister has been forced to accept that Britain will have to leave the single market”. Thus the gulf between euphoria and reality.

Theresa May’s speech was intended to show that Britain is still great, still strong, can go it alone, will surely only benefit from leaving the EU. The reality is that all it shows is the polar opposite. Euphoria and delusion have once more taken over from reality. That reality shows that ministers like London’s formerly very occasional Mayor Alexander Boris de Pfeffel Johnson and David Davis have been reduced to resurrecting World War 2 to somehow suggest Britain can once again stand alone and emerge victorious.

The repeated attempts to use Sterling as some kind of national virility symbol, and the subsequent failure every time - Labour unwilling to accept the political fallout from devaluation in 1948 and 1967, Tories trying in vain to shadow the Deutschmark and paying with their credibility in 1992 - have signally failed to register. Nor have other events. 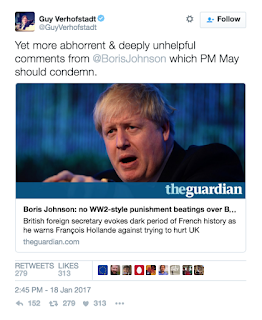 Britain pretended it was a great world power in 1956 as it indulged in brinksmanship and flagrant dishonesty over the Suez crisis. That débâcle ended with the USA teaching us a lesson in reality which many in Government, and the press, are still reluctant to take on board. We were no longer a great power. And we are still not a great power.

That Mrs T put one over on a decaying South American dictatorship over the Falkland Islands has blinded many on the right to this reality. They are also blinded to the less convenient fact that Mrs T was a staunch advocate of the European Single Market. That her successor cannot muster even this enthusiasm would have driver her to despair.

Churchill was horribly wrong in 1925. Theresa May is equally wrong now. And talking up the situation is not going to change that fact. Euphoria is no substitute for reality.
Posted by Tim Fenton at 16:33

Excellent blog post, Tim. Nails the fact that we are likely to revert to post-Empire, pre-EU days on the world stage - a pretence of being a major player, punching above our weight but liable to fall from grace at any moment. The difference being; no great manufacturing base to fall back on these days compared to the UK of 50 years ago.

Much as I love my country and hate to see the UK fail, I fear there is an extremely rough ride ahead. :-(

Churchill was arguably the worst peacetime prime minister in history. If the Second World War hadn't happened, beyond argument in wartime too.

May is straight from that line of liars, hypocrites and thieves. The only difference is in the words put in her mouth by her puppet masters.

Inject that into the Brexit bullshit and you will see it for what it is: An attempt to accrue even more wealth to the Anglo-US gang of spivs looting both sides of the Atlantic - and as much of the rest of the world as they can steal.

For the vast majority in this country Brexit will mean yet more of the same. After a while, much worse. The tory thieves' mindset will never change. If people won't see that after the last generation of divisiveness, poverty and propaganda - and won't organise resistance and dissent efficiently - they will fully earn what lies ahead.

Make no mistake, the perpetrators of this horror already plan a war against either Russia or China if it begins to look like they've finally been rumbled. Brexit is a symptom of the madness, not the cause.

May is just another badly dressed glove puppet. But there's plenty more spiv warmongers waiting in the wings.

Brexit is, of course, not a foregone conclusion by any means - and can still be reversed.

I do wonder if she has the necessary grit at some point to address the house (and the nation) along the lines of:-
"This Brexit isn't going to work. It will be horrendously expensive, take years to achieve, and do us severe damage.
I am stopping the process now - and we will remain in the EU with our colleagues - who I apologise to with much regret at our having caused so much uncertainty.
Now we all need to come together and take Europe to the next level. My government will be fully committed to this shared future. I expect the country to be fully sharing in this new direction".