When disgraced former Sun editor Kelvin MacKenzie attacked Channel 4 News presenter Fatima Manji for the heinous crime of wearing a headscarf while reading the news - not yet a criminal offence, unlike phone hacking and many other creative ways of information gathering employed by papers with which he has been connected - it was only a one-off. No pattern, other than Kel’s routine unpleasantness, could be deduced from it. 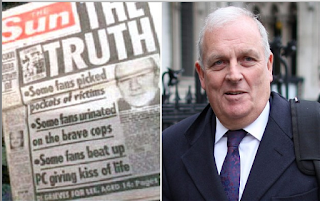 More likely was that it was just another attempt to undermine a broadcaster hated by the Murdoch mafiosi, a thought that was reinforced when faithful News UK retainer Trevor Kavanagh abused his position as a board member of sham press regulator IPSO by using his Sun column to also put the boot in on Ms Manji after her complaint about Kel’s campaign of harassment and bullying was rejected.

But it now seems that Kel has a problem with Muslim women generally, and not just Ms Manji, as he has demonstrated with his latest piss-poor Sun column headlined “BBC cannot represent the 52% after Mishal Husain’s embarrassing Brexit-bashing interview with Siemens director Finbarr Dowling”. Good job he wasn’t called Saunders, innit?

The article starts out by deploying false assumptions like confetti: “THE people of Hull had the very good sense to vote Brexit by a whopping 70 per cent to 30 per cent. No surprise there … It’s the kind of city that Trump identified. Too many LBs (the Left Behinds) with massive youth unemployment, rundown housing and poor opportunities. Remain had done bugger all for Hull”. What has Trump got to do with Hull?

And who would be so stupid as to equate “Remain” with “successive Westminster Governments, and especially Tory-led ones”? But Kel does have a point: “the German manufacturing giant Siemens last year built a windfarm plant to serve the North Sea and employed 1,000 people”. That’s the kind of energy that Sun pundits sneer at, because in their perverse world view, climate change isn’t happening, honestly.

But Kel is incandescent at Dowling’s treatment on the Radio 4 Today programme, sniffing at “the poorly prepped presenter, Mishal Husain” before selling the pass with “He was a good sight cleverer than Ms Husain (not that difficult)”. Er, hello Kel! This is Kelvin McFilth, Mr “One ‘O’ Level” (and no “A” levels, and certainly no degree) calling on someone who read Law at Cambridge and has a Master’s degree from the European Institute.

It gets worse: “Then she asked the ill-researched question … Finally she fell flat on her face … the whole interview was so wrong and indicates the private voting choice of Ms Husain”. The BBC is not there to pander to semi-literate Murdoch thugs, but to the widest possible range of views. Nor is it there to duck the difficult questions for any and every guest who appears before its inquisition.

And its presenters are, whatever Kelvin McFilth’s view of them, entitled to conduct interviews as they see fit, rather than the way some bully boy from the 13th floor of the Baby Shard bunker thinks they should.

But good of Kel to confirm that he has a problem with women in general, and especially those who are followers of The Prophet. It must be sad to be a racist and misogynist bigot in a world that is, despite his boss’s efforts, moving on from that king of thing.
Posted by Tim Fenton at 16:29

"Remain had done bugger all for Hull”.

Well, if by "Remain" the cockney coward actually meant "European Union" he could check out the amounts of (for instance) Objective One funding distributed to towns and cities like Hull. Not enough, but a great deal more than anything the Murdoch gobshite proposed. Certainly not enough to compensate for the socioeconomic damage done to millions by MacKenzie's brand of fascist racism and thievery.

The EU is very far from ideal, but at least it still retains a smattering of social democracy, unlike far right British governments since 1979. Those who perverted it are precisely the kind of corrupt conmen who infest London and Frankfurt and who MacKenzie propagandises for.

The fellow is nothing more than a yapping mongrel left behind by the Thatcher kennel.

I had the misfortune to work for a company that was taken over by MacKenzie and his pals. I can confirm from personal experience that he really is a nasty piece of work.

Looks like Kel and his colleagues at The Scum have learned nothing from Hillsborough, just take a look at today's double page spread entitled "Scrapital of Culture".

They've managed to get the local rag, The Hull Daily Mail on the case (and yes, they are a subsiduary title of The Daily Wail).

There are now social media campaigns to boycott The Scum. The people of Hull and Liverpool have always shared a common bond and I sincerely hope that the citizens of my birth city follow our Scouse cousins in ridding the city of this rag

And for the umpteenth time Islam is not a race so criticism of it may be unpleasant, may be bigoted, it may be any number of things but it is NOT racist.

@Anonymous 3Jan 0814 – I don't know Hussein's religion (nor do I care), but I can tell a heady whiff of bigotry, sexism, and fascism in what KacKenzie wrote. And so might you if you weren't so keen to parrot the tired "but Islam isn't a race!" line.

You know perfectly well that Mishal Husain is a Muslim. Irrespective of that, why is repeating a fact – Islam is not a race – so offensive to you?

He won't let us leave.

We were invited for Christmas and now he is keeping us captive.

@Anonymous 3Jan 1129h - I didn't know her religion at the time, and I couldn't be arsed to find out. You seem to think that the oft-quoted definition (that Islam is not a race) had offended me. No, that fact is not offensive to me. You and Tim are stating that Hussein is a Muslim; fair enough, I'll take your word for it.
MacKenzie was clearly being sexist and misogynist. And, based on the track record pointed out in Tim's article, he's being racist too. MacKenzie wasn't criticising the nature of Islam, he was once again putting the boot in on an uppity woman with a furrin-sounding name and too-dark-for-round-here skin who had the temerity to be doing her job well and to his displeasure.
(PS I now realise I accidentally spelt Kel's name KacKenzie. My mistake. But appropriate.)