Mohamed “you can call me Al” Fayed, whose evidence hastened the downfall of more than one Tory MP in the 1990s, recalled that he had been told by lobbyist Ian Greer that “You need to rent an MP just like you rent a London taxi”. Fayed added “I couldn't believe that in Britain, where Parliament has such a big reputation, you had to pay MPs. I was shattered by it. I asked how much and he said it would be £2,000 a question”. 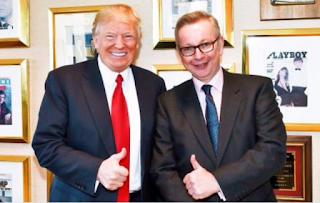 Fayed’s interventions led to the departure from Parliament of Tim Smith, who, as MP for Beaconsfield, had a safe Tory seat more or less for life, and later, via an electoral humiliation, the deeply unsavoury Mostyn Neil Hamilton, who as MP for Tatton was in a not dissimilar situation. Safe seats and rather more than steady money was not enough for the greedy and the corruptible. And little has changed over the years.

Another of those safe Tory seats is Surrey Heath, represented since 2005 by Michael “Oiky” Gove, another MP for whom that better than steady money is insufficient to keep him in the style to which he has decided he should be accustomed. Gove and his equally grasping wife Sarah “vain” Vine are journalists by profession, and more specifically both have been loyal takers of the Murdoch shilling.

Now Gove is back in the news, despite Theresa May having relieved him of his last cabinet role when she arrived in Downing Street. Gove was dispatched by Don Rupioni to interview Combover Crybaby Donald Trump for the Murdoch Times, where he now has a part-time berth. Gove is paid a whopping £150,000 a year for eight hours per week of his time. It’s enough to make the Hamiltons weep over their potter’s wheel. 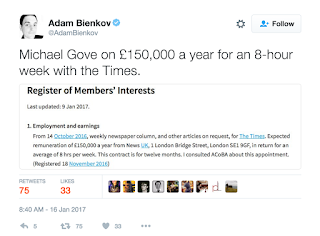 Think about that. It’s not as much as London’s formerly very occasional Mayor Alexander Boris de Pfeffel Johnson was getting from the Telegraph for one column of dubious quality each week, but many will find the idea that someone who has a permanent full time job as a Member of Parliament should be paid an extra £150k by someone who has a vested interest in sticking his bugle into the workings of Government obscene.

It’s not as if there was any great skill on display when Gove met Trump: ITV News claims “The UK stands to gain from a Donald Trump presidency because Britain has a ‘special place in his heart’”. This is because The Donald’s mother came from Scotland, a place where he is now reviled. Sky News suggested a UK-US trade deal would be done “quickly and properly”. Ah, the benefits of unsubstantiated hot air.

Trump had “honeyed words for almost everyone”. Just wait until one or more of those people says no to him. The whole charade, revealing very little we did not already know, was accompanied by a cringeworthy photo of Gove teaming his rictus smile with a forced thumbs-up sign. The thought enters that no credible media organisation would pay £150k for eight hours a week of his time. Unless there were some kind of quid pro quo.

What that quid pro quo might involve, one can only guess. But one thing is for certain - Michael Gove’s interventions in Parliament will be scrutinised like never before. After all, there are enough folks around who remember Tim Smith and Neil Hamilton.
Posted by Tim Fenton at 10:18

So having just seen off TTIP (which got a huge killing boost once the tories and UKIP were "out of the way" by way of our exiting the EU)...

We now have Pob signing up to a UK specific TTIP with the orange Twitler...

Hammond turning us into an off shore tax haven...

May, and the utterly incompetent Hunt, destroying the NHS...

The city of london already booking its exodus to keep its EU financial passporting...

Hummmmm. So rather than the plebs "taking back control", its the bankers and the free marketeers.

Still, I'm sure a working class brexshitter will be along in a moment to say how wonderful its all going to be while not realising just how fucked he's going to be under a tory brexshit and the orange Twitler's third reich.

What's the problem with tory and New Labour MPs selling their arses to rich men?

After all, it's what "entrepreneurs" and "creators of wealth" do. You know, like Blair and his £50K a pop "lectures" (presumably on how to lie and get away with it).

And what's all this about social obligation, conscience and serving the community?......Have you forgotten Ayn Rand's advice to Thatcher that "There's no such thing as society" (let alone the Big Society or the Fair Society)?

Gosh, some people have short memories.

It is not as though a Murdoch organisation would have a record of paying those in public service for the benefit of "news gathering" is it?

Just one step beyond to have puppets "placed" in "high" places either by reason of financial reward, directly or indirectly, or by withholding information kept in the so called "secret dossiers" with or without the connivance of the law enforcement agencies.

Given recent events one wonders how much higher they can go? And a recent poll (survey by PR firm Edelman) showing that public trust in politicians and the media at new lows would suggest that the Murdoch's organisation can't sink a lot lower in debasing the fabric of UK society which is presumably his object (along with his new mate Vladimir P c/o DJ Trump).

Someone else who isn't fooled: https://markdoran.wordpress.com/2017/01/15/pannell-beaters/

Sooner or later the aggregate result of this will take affect. So what do you think will be the reaction of established power-mongers? A shake of the hand and a slow fade into history?