From the 1960s onwards, there were interviewers for every situation: for the politicians, and others of stubborn aspect despite their being publicly accountable, there was Robin Day, and later The Inquisition of Pax Jeremiah. But for those situations where one needed subtlety and tact, the ability to be challenging without appearing threatening, there was Alan Whicker, who has passed at the age of 87. 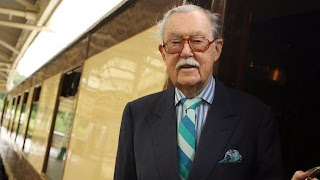 Whicker and a civilised method of transportation

On occasion, one wondered who else could even have got the interview, let alone got away with the subjects broached: “But, Papa Doc, they say you torture people!” he told Haiti’s appallingly brutal dictator in 1969, almost as a humorous aside. And, after that, he got out alive, which could not be said for all of those whose paths crossed those of the Duvaliers.

And it was not just the hard men of world politics: Whicker would include anyone and anything that would interest the viewer, including working his way across the USA, from flagging down an express train in Alaska, via plastic surgery season ticket holders in California, and the Texas cities where everyone packed a piece as a matter of routine, to those growing old (but not wanting to admit it) in Florida.

He was unthreatening, meticulous, of restrained style, and in the right place at the right time as TV technology and the availability of the memorable and eccentric came together, in Whicker’s case helped by the coming of the jet age. Here there was a parallel with his friend Michael Parkinson, who also took advantage of a shrinking world and the availability of those really big stars of old.

Both produced memorable television as a result, one in the studio, the other out on the road. Both had recently hung up their interviewing hats, but then Whicker came out of semi-retirement to make Whicker’s War in 2004, telling plainly and with no little candour of how he got through the latter years of World War 2, while many of his contemporaries did not.

Indeed, when he took the surrender of a German SS General and his troops in Milan (along with their stash of money), and thus averted a nasty confrontation with the locals, he would not yet have been 20 years old, which at the time meant he was not old enough to vote. Yet he had already experienced the landings at Anzio, and the chasing north of the Germans.


Anyone in any doubt as to Whicker’s contribution should seek out that war memoir, while those who already know can remember the send-up of which he said “I was very flattered. I felt that they weren’t being acid about me, they were being kind. I was having the piss taken out of me by experts”. Yes, the man who travelled the world for six decades is often best known for that Monty Python sketch.


They most certainly don’t make them like that any more. Thank you, Alan Whicker.
Posted by Tim Fenton at 11:13

What a great tribute. I didn't know a lot about Alan Whicker, but I always remember his advice to Michael Palin before he went off to do Around the World in 80 Days (a seminal series in itself) - "...there will be ways of ensuring that you have the best 'rollock' to lean on...". Wonderfully deadpan. Palin's reply is classic too - worth revisiting.