The Independent Parliamentary Standards Authority (IPSA) has suggested that Members of Parliament should get a pay rise of £10k – but not for another two years. Some senior politicians have counselled caution, given that so many other public sector workers are lucky to get a 1% increase right now. And one observer has been positively apoplectic at the thought of them getting more money. 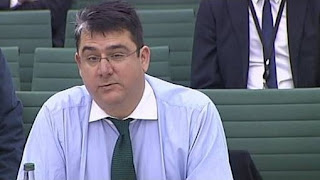 To no surprise at all, that observer is the perpetually thirsty Paul Staines, whose column for the Murdoch Sun, another of the signs that the Guido Fawkes blog has sold out to the Fourth Estate, now has the preposterous strapline “The political backbiter that every MP fears”. So that’ll be more Smash advert impressions breaking out around Portcullis House, then.

The Great Guido is not at all happy at the thought of anyone getting more money at a time when there is no more dosh rolling in to the coffers of Himself Personally Now. So, despite the Fawkes blog on this occasion not going after MPs – who, it should be noted, did not suggest the pay rise – Staines took to Twitter yesterday to whine long and loud at the people without whom he would be skint. 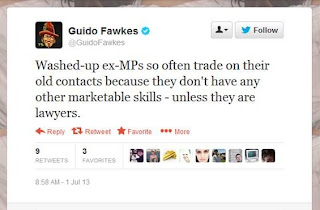 “Washed-up MPs so often trade on their old contacts because they don’t have any other marketable skills – unless they are lawyers” he asserted, oblivious to the fact that that is their business. After all, he wouldn’t like to be referred to as a “Washed-up” former City trader who couldn’t go back to that occupation as he declared himself bankrupt and misled the courts along the way. 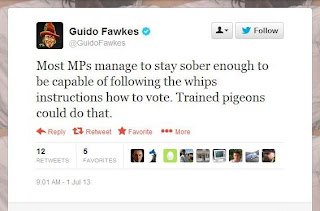 Then we get the jaw-dropping “Most MPs manage to stay sober enough to be able to follow the whips’ instructions how to vote. Trained pigeons could do that”. That from the lush who couldn’t stay sober long enough to avoid being bounced for a second drinking and driving offence, and one that took his total of alcohol related convictions to four. Staines has no room to call anyone out on that subject. 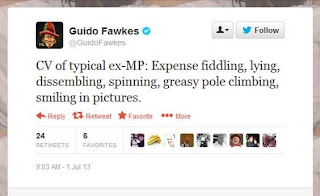 And finally comes the piece de resistance: “CV of typical ex-MP: Expense fiddling, lying, dissembling, spinning, greasy pole climbing, smiling in pictures”. Staines, as the record of his bankruptcy hearing makes clear, knows all about lying, dissembling and spinning. As recently as last weekend, Zelo Street caught the SOB bringing these talents effortlessly to bear in his laughably fraudulent post on Income Tax.

No, what we have here is a bitter and jealous individual, who makes his living from the politicians he supposedly despises. If it weren’t for them, he would be reduced to hawking his CV around call centres and fast food outfits, and there would be none of that freeloading and gatecrashing to which he and his rabble have become so accustomed in the recent past.


He can try polishing all he likes, but turds remain turds. Another fine mess.
Posted by Tim Fenton at 09:08