Just when you thought the spinning couldn’t get any more lame, along comes an event to prove you wrong. Today, Labour MP Tom Watson decided he had had enough of the whispering and constant assault from those who generally have difficulty reaching up to his ankles, and resigned his post as the party’s campaign co-ordinator. This caught the entire punditerati off guard, well, briefly. 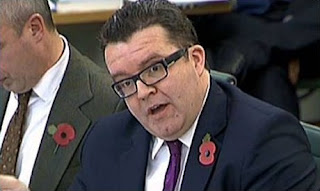 I want a word with you

As Watson published the resignation letter he had – clearly reluctantly – sent to Mil The Younger (see it HERE), Zelo Street checked and found that none of The Usual Suspects had picked up on it. But then, the perpetually thirsty Paul Staines and his newly anointed teaboy Alex Wickham rallied, and at least managed to find the letter, copy and paste it, and add a whole one line comment.

Thus the stressful environment of sleeping off another session. But Staines knows why Watson has resigned: “Tom Watson Resigns Over Falkirk Scandal”. Yes, an internal Labour Party matter is The Great Guido’s business, and he knows all the details, despite the report on this particular selection ruckus not even having been seen by the bloke he’s reporting on. 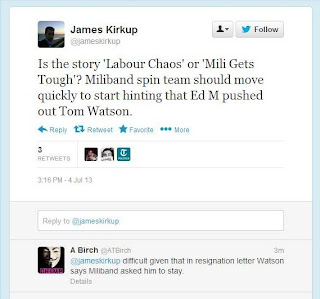 Meanwhile, over at the Maily Telegraph, James Kirkup was in a pickle: “Is the story ‘Labour chaos’ or ‘Mili gets tough’? Miliband spin team should move quickly to start hinting that Ed M pushed out Tom Watson”. Well, Jimbo, (a) you don’t know the background, (b) what they should do is their business, and (c) what they might well hint to you is that you should stick your bugle elsewhere, thanks. 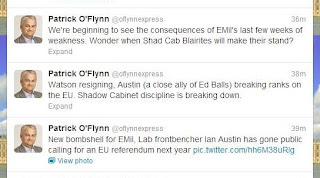 But at least Kirkup is sticking more or less to the subject, unlike Patrick “Lunchtime” O’Flynn at the Express, who believes it is all over for Mil The Younger because Ian Austin has expressed an opinion about a referendum on the UK’s membership of the EU. This, he contends, means that shadow cabinet discipline is breaking down. Small wonder the Express is little short of a joke newspaper. 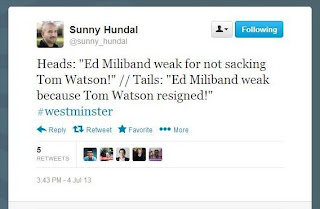 And the routinely mischievous Sunny Hundal has noted that there will be a rash of those saying Miliband is weak for not sacking Watson, while also saying that he was now weak because Watson had resigned. Sunny is not happy about the timing of the resignation, but then, there is never a good time for these things. And at least he has avoided some of the plainly daft rhetoric of supposedly mainstream pundits.

Nobody knows for certain what is behind Watson’s resignation, other than by making assumptions and making appeals to authority by claiming to have “decoded” parts of the letter. Neither is a good method of factual analysis. We will find out more in due course, while of course most of the press, favouring any Government that is not Labour, will not be looking to exploit anything similar in the Tory Party.


That’s the people who are today accusing the BBC of bias. Couldn’t make it up.

[UPDATE 5 July 1445 hours: while more punditry variously ascribes Watson's departure personally to Young Dave (Will Heaven at the Tel), attempts to invoke the name of Neil Kinnock (Iain Martin, ditto), or claims intimate access to the Labour leadership which doesn't exist (Dan Hodges, as if anyone needed a name  on that one), there is one small matter they are all missing.

Yes, while the Tel's James Kirkup talks of "Decline and Falkirk", his paper's preferred party - that would be the Tories - has recorded another horribly low rating in the latest Survation poll for the Mirror, which has Young Dave's jolly good chaps on a paltry 23%, only one point ahead of UKIP and a whole 13% behind the supposedly in-decline Labour Party.

Survation note that the way the voting preference question has been put in the past may have been leading to an understatement of the UKIP vote, if the party is not given as a choice at the outset. That kind of vote share at a General Election would see Mil The Younger romp home with a substantial majority. And, to put the lid on the lame excuses, Damian McBride has also had his ninepence worth on the Watson story.

McBride, unlike almost all of those who have been holding forth about the affair, actually knows Tom Watson. And he has put it in direct terms: his former colleague went because he can do without all the bullshit and aggravation, and also because he knows he will, as a back-bencher, be free to pursue those causes he wants to, without the constant pressure cooker atmosphere.

Sometimes, someone needs to come along and tell the sillier members of the punditerati a few home truths. Well done that man]
Posted by Tim Fenton at 16:43

I like the right wing spin that this proves that Labour is in hock to the unions.

Pardon? You stand up to the biggest, you more or less accuse it of fraud, you risk losing a large part of your income in doing so and that proves how much they control you?

And for their next exclusive? How to prove black is white?

Regarding the Survation comment about YouGov maybe the reason that YouGov consistently downplays UKIP's performance is that, from memory, the owners were once Parliamentary candidates for the, er, Tories.