So Farewell Then, The Commentator

Another week, another example of The Curse Of Zelo in action, as it seems the unloved and unsuccessful right-wing group circle jerk otherwise known as The Commentator is in trouble. This is the site that told its readers that I had accused them of buying Twitter followers, which I had not. They refused to do the right thing and say sorry, and the Curse has done the rest. 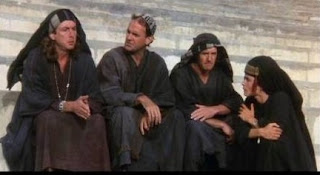 An editorial meeting before the split

Every visit to The Commentator nowadays brings the tiresome top-of-page greeting “The Commentator is supported by our readers ... Support us by clicking here”, and the About page gives an idea why. After an apocalyptic spiel about how the West is under attack and We Must Support Israel (er, hello Commentator, we already do support Israel), there is a plea for help.

“P.S. - We're basically running the site off our own dimes at the moment. If you want to help support us, you can click here” is the message. Heck, a blog that gets no outside funding? Soil the bed, that’s a bit radical, isn’t it? Er, no it isn’t: Zelo Street does not receive, and nor does it request or require, any external funding – like thousands of blogs across the country.

So what happened to all those staff – presumably paid staff? Dane Vallejo – who believed that those he considered “left wing” did not count – has left, protesting that, even though The Commentator advertised for unpaid interns, he had been paid. The occasional appearances of the odious flannelled fool Henry Cole, tame gofer to the perpetually thirsty Paul Staines at the Guido Fawkes blog, have ended.

The Fawkes blog’s newly anointed teaboy Alex Wickham, who was given the grand title of The Commentator’s Political Editor – yes, I know, he wouldn’t be able to identify politics if it jumped up and fly-hacked him in the undercarriage – is nowhere to be seen. And now, not that the website tells you, the equally grandly titled Executive Editor, Raheem “call me Ray” Kassam has gone.

This means that the humourless Robin Shepherd is left all on his tod to persuade the idle and desperate to pony up content for nothing, which they can do just as easily at the HuffPost UK, just to prop up another boring outlet for the libertarian right. The Commentator has been going for just over two years. It’s been plugged all over the right-leaning part of the web. And it’s been an utter failure.

Punters can get screamingly right-wing dross at Telegraph blogs and the Spectator, or if they’re really keen, look across the North Atlantic and visit Daily Caller, any of the Breitbart sites, or pundits like Michelle Malkin. Why invest in a bunch of Mini-Me no-marks when the real Conservative deal is available elsewhere? The Curse Of Zelo has done its work once more: bye bye The Commentator.

And it couldn’t happen to a more deserving bunch of, er, people.
Posted by Tim Fenton at 10:16