While the press has been poring over the widely leaked testimony of Francisco José Garzón, the driver who was at the controls of the Madrid to Ferrol train that derailed just before Santiago de Compostela last Wednesday evening, other parties to the affair are keeping remarkably quiet. Moreover, having heard Garzón’s account, the investigating judge has released him on bail. 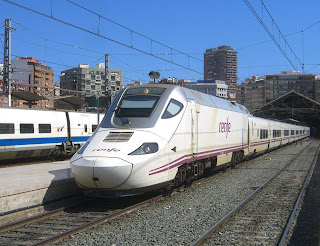 And the train’s black box data recorders have, as of yesterday evening, still not been opened up and examined. One might get the impression that the authorities are being rather cagey about the whole business. In the meantime, the leaking of Garzón’s interview with the judge merely fuels the impression that it is becoming convenient to dump on the driver.

Here, there is a parallel with the UK: when an InterCity 125 train ran into a freight train at Southall in 1997. Driver Larry Harrison was charged with manslaughter: the press was fed the line that he had admitted packing his bag in preparation for arrival at London’s Paddington terminus, although this would have taken two to three seconds, and the sighting time for the two signals he missed was far longer.

Ultimately, it came clear that Harrison had been sent out with the train’s Automatic Warning System (AWS) not working. Moreover, the two signals he missed (those showing two and one yellow respectively) had been moved from the lineside (and eye level) position as part of the then-recent Heathrow Express electrification works. The AWS “hooter” would have alerted him. It wasn’t working.

So the manslaughter charges were quietly dropped, and then-operator Great Western Trains was hit with a £1.5 million fine for health and safety breaches. In the case of the Spanish derailment, there is also a safety system question: the 730 series train involved in the accident was fitted with the European Train Control System (ETCS). It was present on the new line. It was not being used by that train.

Garzón’s testimony suggests he had become distracted or disoriented regarding exactly where he was. Had ETCS been active on his train, it would have signed off at more or less the point where he needed to start braking for the curve: that would have been his cue to action, and to confirm where he was. Adif, the infrastructure operator on whose road it happened, had little to say today.

All that you can see on the Adif site is that the Government minister responsible has sent condolences to those bereaved. Train operator Renfe has been similarly quiet, its site just carrying contact information for those affected by the crash. And coach manufacturer Talgo is saying nothing, although the selection of trains shown on its homepage wisely does not include the 730 series.

It may be politically expedient to dump on the driver. But it would be wrong.
Posted by Tim Fenton at 17:35

Exactly what i said. If ETCS was approved on S730s trains on Ourense to Santiago line, it will indicate him that he is leaving a section secured by it which is approx 4km before that curve - where trains should start to brake anyway. He will realize where he is, and will definitely start to brake.

I think that ETCS should even be programmed to slow trains to let's say 100km/h before leaving section secured by it. Okay, it will add some time to travel time, but it will do approach to Santiago much, much safer.

This accident, with track configured and boring (without any significant landmarks) was waiting to happen. Yet, it took only year and half. Hope that they will do something with it.

Your commentary upon the Santiago accident has been informative and helpful – please keep it up. It is in marked contrast to the majority of media reports which seem bent upon precipitate condemnation of Driver Garzón.

You may find the online English language version of El Pais useful. I was particularly interested to note the comments colleagues of Garzon are reported to have made at http://elpais.com/elpais/2013/07/29/inenglish/1375124126_161221.html:
They 'believe that it was easy for Garzón to become confused — as he told the judge — because he was traveling on a route between Ourense and Santiago that contains 31 tunnels and 38 viaducts in only 87 kilometers. Just before he entered the sharp curve at Angrois, where the disaster occurred, he had just gone through in succession a curved viaduct, a tunnel, a straight viaduct, and another tunnel.'