You have to hand it to Lynton Crosby. He initiates the press briefing, that Labour are somehow responsible for 13,000 avoidable and unnecessary deaths in NHS hospitals, despite the review he’s referring to taking place years after they left power, yet dodges the heat over rather larger numbers of avoidable deaths perpetrated by an industry on whose behalf he has been intervening. 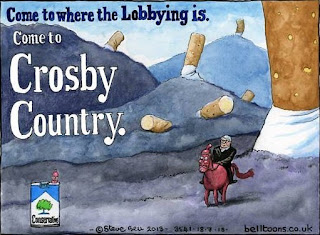 Yes, Lynt shills not only for Young Dave, but also for Big Oil, and for Big Tobacco. And, as I pointed out yesterday, last week’s briefings about the Keogh Review had his fingerprints all over them: crude, dog-whistle stuff, flagrantly dishonest, and of a standard that guarantees a leap from gutter directly into sewer. Moreover, if Labour cannot effectively rebut the Crosby tide, they will have a problem with it.

But, when it comes to avoidable deaths, numbers like 13,000 over several years pale into insignificance when compared to the malign effects of Big Tobacco. Cancer Research UK estimated that smoking-related diseases, including cancers and heart disease, resulted in a whopping 102,000 premature deaths in 2009 alone. Many of those involved treatment in one or more NHS facilities.

So it might be thought that any responsible Government would want to make inroads into that number, not only to prevent deaths, but also reduce the cost to the NHS, and therefore the taxpayer. But that thought would be misplaced, as with Crosby present behind the scenes at 10 Downing Street, the Government has ducked its responsibilities and caved in to industry pressure.

The Royal College of Physicians (RCP) set its stall out last year, with the deeply subversive Guardian noting “Fifty years after public first warned about cigarettes, doctors call for price rises, plain packaging and anti-smoking campaign” [my emphasis]. Proposals to go ahead with plain packaging for cigarettes were dropped from the Queen’s Speech in May this year.

Lynton Crosby also works for Philip Morris, the company that brings the world Marlboro (among other brands). And despite the stonewalling of Cameron’s spokesman this week, plus the usual – and utterly ineffective – attempts at deflection from Grant “Spiv” Shapps, the conflict of interest is only less than obvious to someone who would rather not see it.

On top of that is the rank, stinking hypocrisy: Crosby is on the one hand behind the press briefing pitching the “13,000 NHS deaths” line, while on the other he is, er, behind the sidelining of a policy that would make inroads into that figure of just over 100,000 avoidable deaths – which happen each and every year. And then he gets the press to “look over there” as instructed.


You think something stinks about that kind of politics? You’d be absolutely right.

[UPDATE 21 July 1120 hours: the public is clearly not impressed by the Government's move to drop plain packaging. 60% of those asked as part of a YouGov poll were of the opinion that this happened due to pressure from tobacco firms - like the one Lynton Crosby shills for.

Moreover, as The Australian has pointed out, recent research shows that smokers using plain packets perceive the content to be of lower quality, and as a result are more likely to look to quit the habit. Even a marginal impact - given that figure of over 100,000 smoking related deaths in 2009 - would mean thousands of lives saved.

Other interesting figures from the YouGov poll were that 58% of the population back plain packaging, and a mere 18% think it OK that Crosby should be able to represent both the tobacco industry and the Tory Party. On top of all that, Cameron again ducked the question of Crosby's involvement when questioned directly on it by Andrew Marr this morning]
Posted by Tim Fenton at 10:54