Tory MP Rob Wilson, the Fred Scuttle lookalike who is nominally representing the electorate of Reading East, has now turned his attention to the BBC, with unintentionally side-splitting results. Wilson has been egged on by the legendarily foul mouthed Paul Dacre and the rabble at the Guido Fawkes blog, and maybe this has inhibited any remaining ability to think before putting his foot in it. 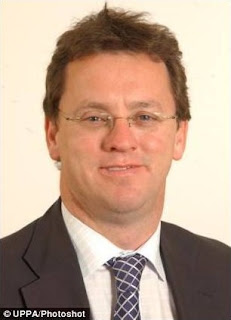 Not quite as funny as Benny Hill

“Could BBC face a police probe into £369m pay-offs? Executives who authorised payments could face investigation” thundered the Mail the other day, with the Fawkes folks chipping in with “Huge BBC Pay-Offs Could be Matter for Police”, as Wilson buttonholed Amyas Morse, head of the National Audit Office (NAO) to suggest that the Beeb may have indulged in criminal activity.

How could they have done this? Ah well. Some former employees have received pay-offs, which is not news, but as the BBC is funded from the licence fee, this is sufficient grounds for the Fourth Estate to administer a good kicking, as part of their unremitting drive to undermine the trust the Corporation enjoys among the public, something that many in the press deeply resent.

That this trust has been built up by years of straight reporting of news, combined with a clear delineation of news and comment, and a complaints procedure that is seen as fair and effective, does not occur to editors like Dacre, and their useful idiots like Wilson. The idea that papers like the Mail should raise their news game is anathema to such people. Far easier to drag the Beeb down to their level.

So Wilson has demanded that Morse tell him “In the event that you consider that criminal offences may have taken place, I would be grateful if you would inform me whether the evidence is sufficient to warrant a wider investigation as to the possibility of fraud, misuse of public funds, or other wrongdoing in relation to severance payments at the BBC in recent years”.

Modest, isn’t he? And, as the man said, there’s more: “Based on the reply I receive, I will consider whether there are grounds to refer this matter to the police”. Yes, another of what Robin Day memorably – and rightly – called “here today and gone tomorrow politicians” is proposing Himself Personally Now as judge and jury. Sadly for Wilson and his cheerleaders, though, Morse was unimpressed.

As has been reported (but not by Wilson’s supporters), “The National Audit Office (NAO) has made clear that it uncovered no evidence of illegality during its investigation into the excessive payoffs handed to senior BBC managers ... no evidence of fraud whatsoever ... If we had uncovered any illegality, it would have been set out in the report”. So another not even slightly heroic Wilson failure, then.


Still, there’s always that MP’s job he was elected to do. Just a thought.
Posted by Tim Fenton at 10:38