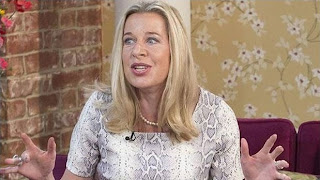 Something to put you off your morning coffee

Most of that desperation comes from the print media, typified by the Murdoch Sun, wanting to be first to tell the world that Katie Hopkins makes catty remarks about Katherine Jenkins, who has committed the crime of being Welsh with malice aforethought, as well as being rather good at singing, and smart and attractive with it. And she gets invited to lots of Royal events.

And, d’you know, I couldn’t give the proverbial flying foxtrot how many Buck House gigs Ms Jenkins gets: fair play to her. But not only does the Sun want to tell its readers, the Mail also wants to be first to lift the copy and tell everyone on Mail Online too. Then they both come the faux outrage about Ms Hopkins opening her north and south out of turn, which, without them, nobody would know about.

The Mail has form on this: only the day before, it was advertising “Katie Hopkins: 'If I am the most hated woman in Britain, we've all lost a bit of perspective. I'm just telling the truth'”, as first Ms Hopkins once again opened mouth and inserted foot, and then the press screamed “look at her” in mock horror as a quick and cheap way of attracting hits, so feeding their habit once again.

After all, there is no news value in Katie Hopkins, and precious little entertainment either. We’ve already got Liz bloody Jones, Julie Burchill and Amanda sodding Platell, who are at least half coherent in their cattiness. Hell, Ms Burchill can even chuck in a little subtlety, although on occasion if you blink, you’ll miss it. The Hopkins notoriety is entirely down to the press – and ITV’s This Morning.

That has not deterred the Mirror, which has already launched a Hopkins quote retrospective: “Katie Hopkins' worst quotes EVER - is she the most offensive woman in Britain?”. Well, unless she’s blown a raspberry at Royalty, sworn more than Paul Dacre, or farted out of turn, probably not. And you can probably find worse in most fashionable London eateries, especially where hacks and pundits gather.

That is probably why the papers like Katie Hopkins so much: she’s just like so many of the people they employ. Loud, snobby, unsubtle, tactless, uncaring, ignorant, judgmental, dishonest, ageist, disablist: an all-round pain in the arse and another one of those clever people who talk loudly in restaurants. And she gets the unwary to buy more papers, well, for a short while, at least.